WHEN Bryan Adams came to rock out in Bratislava earlier this year, he received a distinct jewel. A pendant in an oval shape represented the world map, and a black Tahiti pearl on it pointed to the place where Slovakia is located. Entitled Slovakia - the Pearl in the Heart of Europe, it was the creation of Slovak jewellery designer Peter Janík.
"The idea behind it was to illustrate the geographical location of this country for someone who had come here for the first time. 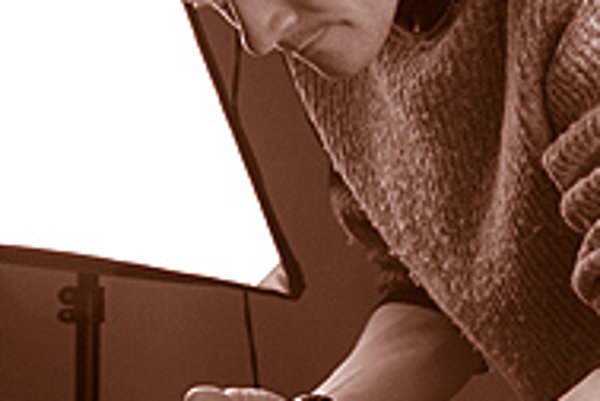 Font size:A-|A+
WHEN Bryan Adams came to rock out in Bratislava earlier this year, he received a distinct jewel. A pendant in an oval shape represented the world map, and a black Tahiti pearl on it pointed to the place where Slovakia is located. Entitled Slovakia - the Pearl in the Heart of Europe, it was the creation of Slovak jewellery designer Peter Janík.

"The idea behind it was to illustrate the geographical location of this country for someone who had come here for the first time. And also to remind him where Slovakia is, so he can come back in the future," said Janík, who has always tried to bring something more than just pure decoration into his work.

But he would probably never have gotten the opportunity to work for such a star as Adams, if he had not won the world's most prestigious jewellery-pearl competition, The Tahitian Pearl Trophy. With his Go Create ring, enabling a boundless number of combinations of pearls and colours, he scored first in the Jewellery for Men category in 2002, the second time this biannual contest was held.

Currently, the 32-year-old designer, who devotes his time to custom-made products, designing unique jewels for individual customers, is one of the most internationally successful jewellery makers in central-eastern Europe. His works have been shown in 25 countries and are owned by people around the world. Though successful internationally, he struggles in his homeland.

"Obviously, after I won the [Tahitian Pearl Trophy] contest, some people started to notice my name and my work. The promotion in the media, however, increased sales in the jewellery industry in general. The lowest gain from the whole affair was probably mine; the commercial creators did much better off of it," said Janík. He has been in the jewellery industry for over a decade, but he still cannot afford to buy a car or his own flat, even though his works can cost hundreds of thousands of Slovak crowns.

"Everything I earn I put into exhibitions. But it has to be [this way]. Only the awards from significant competitions distinguish an excellent jeweller from the average one," he said.

"If somebody becomes successful in the West or in the US, the name sells the products itself. But here, the price for such products would be a joke. Society has not matured so much that a person would go to the [original] source. He is happy with a cheap replica of similar design," he said.

To understand the reasons, he says, one has to go to the country's past. According to him, the fact that Slovakia had not been an independent state until now is that neither the economic nor the political structures have supported inner industries for export. "They have worked quite the opposite way - we have imported far more, and thus paralysed our domestic production."

Ever start his own studio?

The country's backward mentality, according to Janík, is also the reason he has not yet opened his own studio. However, this should change by the end of this year. Living off the main highway, in the small northern Slovak town of Kysucké Nové Mesto, he plans to move his workplace to that region's capital of Žilina, so that potential customers have easier access to his work.

Another reason he has not yet opened a studio is that he chose to follow a different path than most of the other Slovak jewellery makers. For him, the main priority was earning credit, so that he could then fully devote himself to his creative activities.

"It was impossible to take care of such a place during the time when I had to be flexible and travel the world to collect experience," he explained.

More than just a jewel

Janík started to experiment with jewels when he was a student. He designs "variable constructions" that can be changed in some way, play with optics, and combine unusual materials. He is the first jeweller in Slovakia to start using titanium and palladium alloys, rubber, silicon, and laser technologies in his jewels, which he mixes with rare materials - brilliants, black opals from Australia, and black and yellow pearls from the Tahitian islands - in combination with 18-carat gold.

From making artistic artefacts and jewels specifically for exhibitions, contests, or galleries, Janík switched to making custom-made jewels. The value of such works depends on the creator's credit and on the originality of the product: When both are good, the sky is the limit.

"These jewels are specially tailor-made for individual customers. Similar to the mobile phone or automotive industries, where individual approaches already exist. Such products reflect the feelings and characteristics of the customer, and become a nonverbal means of conversation for the customer," Janík said.

Customers usually give him freedom in terms of design and material combination. And because of the originality of the pieces, one usually has to wait half a year for a set to be made.

In 1994, Janík even started to test constructible jewellery sets, which can be taken apart into small pieces and then put back in various combinations.

"I have always tried to make a jewel something more than just décor or an ornament, which, by the way, was the original function of jewellery - to decorate. At the same time, though, a jewel was a symbol, or even a weapon.

"Today, jewellery incorporates a wide scope of design - it can have various characteristics and uses. The limits of what a jewel can be change. With the trend of making things miniature, maybe one day a computer could be built into a piece of jewellery."

Janík draws inspiration for his works from the ancient cultures of Egypt and the Celts; from architecture, furniture, and automotive designs; and from high technology that currently tends to miniaturize things. His Go Create ring, for example, was inspired by a Sony advertisement and named after its slogan.

"I liked the slogan, because variable jewels also force a person to think creatively."

He follows Scandinavian design, which has been closest to him with its pragmatic, simple approach defined by the motto "less is more". This style also enables him to focus more on the functional use of a jewel than on its ornamental value, including the ergonomic function by adjusting the shape of the jewel to the curves of a person's body.

"When somebody invests in such jewellery, he or she expects a maximum functionality out of it. It is the variability and multifunctional use of the jewel that generates a higher price."

Janík's jewels have been exhibited since 1992 in tens of countries, including England, Belgium, Dubai, Finland, Island, Japan, and Switzerland. His works can be found in Australia, the Netherlands, Ireland, Canada and the USA, as well as on the Slovak TV personality Gabriela Haršányová.

This month, a new exhibition opens on December 4 at 19:00, at the Slovak Cultural Institute in Berlin. Entitled The Fourth Dimension of Jewels, it offers a retrospective of the artist's work.

The winner and finalist of several international competitions, Janík used the prestige of the awards to increase his chance of cooperation with foreign companies, and to set the value of his products on the international market. For him personally, the awards have also confirmed the path he has been following creatively.

The main thing that changed at home after Janík achieved international success, though, was the level of jealousy directed at him.

"Jealousy usually walks hand in hand with success. I say that it is this jealousy and stupidity that breaks Slovakia's development," he said. But despite the option of leaving his home country, he says, he is determined to stay here until May next year, when Slovakia enters the European Union.

"I will stay to see how the situation changes here after entering the EU, when the real quality will be sifted out from the rest. If things don't improve, I might leave. I will see."