ALTHOUGH the ruling coalition is making progress in its efforts to find sufficient support for its 2004 draft budget, in some cases, according to critics, with the use of political bargaining, the fate of the proposal and the size of the state deficit remain uncertain. Coalition ministers and MPs met to discuss the budget at the parliament's recreation resort on December 1.
"I think we moved towards approving next year's budget," said Finance Minister Ivan Mikloš after the meeting.
However, Mikloš was forced to make some major concessions. 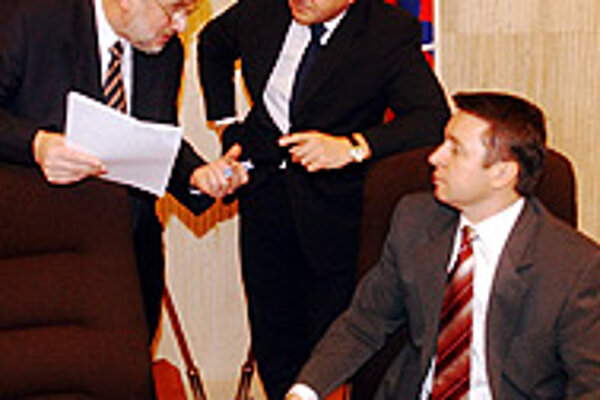 Font size:A-|A+
ALTHOUGH the ruling coalition is making progress in its efforts to find sufficient support for its 2004 draft budget, in some cases, according to critics, with the use of political bargaining, the fate of the proposal and the size of the state deficit remain uncertain. Coalition ministers and MPs met to discuss the budget at the parliament's recreation resort on December 1.

"I think we moved towards approving next year's budget," said Finance Minister Ivan Mikloš after the meeting.

However, Mikloš was forced to make some major concessions. The coalition has agreed that it will need around an additional Sk850 million (€20.74 million) for what it sees as major priorities. Mikloš had previously warned that if the parliament tried to increase the budget deficit, planned to be in line with the government's resolution of 3.9 percent of the GDP, he would withdraw the draft from parliament, thus blocking the passage of any changes.

Mikloš continues to insist that he will not touch the current deficit figure, intended to force stricter fiscal discipline upon the administration and bring the country closer to meeting the Maastricht criteria, which have to be fulfilled if the government is to bring to fruition its ambition of introducing the euro around 2008.

Instead, he wants to find the funding for designated priorities in transfers between various budgetary chapters. However, increasing the deficit no longer seems to be ruled out.

"If the deficit is increased, I will have to think about what I'm going to do," said Mikloš. The finance minister, a member of the Slovak Democratic and Christian Union (SDKÚ), has to find the resources to finance three areas, each seen as key by one of the other three members of the ruling coalition - agriculture, schools, and investment incentives. The Hungarian Coalition Party (SMK), the majority of whose voters are ethnic Hungarians living in the rural south of the country, made it clear long ago that it will not vote for the budget if farmers are not granted more subsidies in the next year. When the cabinet voted on the draft on October 14, SMK ministers were the only ones to abstain.

Slovakia is set to join the EU in May 2004, and while Slovak farmers will receive some subsidies from the union, it is up to the acceding member states to contribute to that amount from their national budgets.

Agriculture Minister Zsolt Simon, an SMK nominee, has repeatedly stressed that to be able to compete with producers in neighbouring countries, farmers in Slovakia will need to get total direct payments equalling 55 percent of the amount an average farmer in today's EU gets. The sum proposed in the budget would only bring the amount to 50 percent. The coalition deal is a true compromise as in 2004 farmers should get 52.5 percent of the EU average, which will require an additional Sk340 million (€8.3 million).

"We can live with 52.5 percent. If today's agreement is upheld, we will support the budget," said deputy speaker of parliament Béla Bugár, head of the SMK.

Schools, too, can hope to get more from the state with the help of the Christian Democratic Movement (KDH), whose member Martin Fronc is the Education Minister. "Education is a priority for the KDH," said speaker of parliament and KDH boss Pavol Hrušovský on December 2.

As much as Sk200 million (€4.88 million) in additional funds are to go to elementary schools and high schools. The responsibility for financing and administrating schools has this year been transferred from the state to the municipalities, many of which were unable to find enough money to keep all of them open. Moreover, a further schooling reform will be launched next year.

Economy Minister Pavol Rusko, head of the coalition party New Citizen's Alliance (ANO), will get the most money: Sk300 million (€7.32 million) for investment incentives. Since taking office in late September, Rusko has made it his top concern to attract foreign investment. His most recent success came at the end of November when Slovakia was shortlisted along with Poland as a possible investment site for the South Korean carmaker Hyundai.

Rusko has repeatedly stated that he sees no problem in increasing the budget deficit by 0.9 percent, or around Sk1.3 billion (€31.72 million).

A further Sk50 million (€1.22 million) is to be set aside as a reserve in case no investor is found to finish the construction of the new Slovak National Theatre building.

The ruling coalition is in a delicate position, as it officially only holds 75 seats in the 150-member legislative assembly. Three more MPs are former members of the ANO caucus and vote along with the coalition on most issues.

Former Defence Minister and SDKÚ member Ivan Šimko, who has much criticised his party's leadership for using undemocratic methods in governing the party and the country, formed his own platform on November 16 - the Free Forum (SF) - within the SDKÚ caucus. Seven other SDKÚ members have joined the SF, adding to the coalition's weakness.

Šimko has made only vague statements about the policies of his group, stressing that he wants to ensure the return of values to political life and his determination to support only measures compliant with these values. One of the few specific demands Šimko has articulated in recent weeks is his request to increase military spending from the 1.8 percent of GDP proposed in the budget, to 2 percent, an obligation Slovakia has to meet as a future NATO member. The former defence boss seemed convinced by the cabinet's arguments that the additional 0.2 percent does not have to be allocated directly in the budget, but can come from Russian debt payments. At the meeting of coalition representatives, Šimko focused more on school funding.

"[The budget] is on its way to meeting the everyday needs of people," he said.

Opposition leaders claim that coalition representatives, desperate to make sure the budget is approved, are bribing opposition MPs.

"The coalition is offering vacant positions as ambassadors. Soon, everyone is going to know about it," said deputy speaker of parliament Viliam Veteška, member of the Movement for a Democratic Slovakia (HZDS).

Other opposition leaders joined Veteška. "The coalition has money stacked in its drawers, it can buy whomever it wants," said Robert Fico, boss of the Smer party. Fico is known for accusing government representatives, especially Finance Minister Mikloš, of corruption related to the privatisation of large state-owned firms.

The Smer leader said that PM Dzurinda visited the city of Poprad and promised its mayor Anton Danko that he would support the construction of a sports arena in the city. Danko, a well-known former hockey referee, is one of the three independent former members of ANO. Danko denied the allegations.

The Communist Party of Slovakia (KSS) blames its internal problems on the upcoming vote on the budget. On December 1, KSS MP Herman Arvay announced that he was leaving the party caucus due to bad interpersonal relations, extremist communist rhetoric, and internal party policies.

KSS boss Jozef Ševc said that Arvay is being "exploited by the ruling coalition" in order to weaken the opposition's position in parliament.

Arvay plans on being independent, but eventually wants to join the parliamentary caucuses of either a social-democratic or liberal party. Two roughly meet that definition - the opposition party Smer or the coalition party ANO. The common enemy presented by the draft budget has united the opposition. In an unprecedented move, top representatives of all four met to agree that none of them would vote in favour of the measure and even discussed broader coordination of their legislative efforts. The HZDS has so far refused to meet with representatives of the People's Union (ĽÚ), whom HZDS boss Vladimír Mečiar sees as "traitors". The ĽÚ is made up of MPs who broke away from the HZDS after the 2002 parliamentary elections and formed their own party and caucus.

Even if the budget gets through parliament, President Rudolf Schuster can refuse to sign the measure and send it back. Schuster has recently used this right on a number of measures. In the event that the President returns a law, the parliament votes on it again. Whereas only a majority of the voting MPs is required to pass a law the first time around, a majority of all MPs, 76 votes, is needed to approve a measure previously returned by the President. If the majority of parliament approves a draft, the President no longer has any power to block the legislation.

If the budget is not passed by the end of the year, state finances will be governed by a provisory budget, the budget used for 2003. However, that may pose some threats as, starting next year, among many other things, a new tax system will be put in place.