LIMITING the immunity of Slovak MPs and approving laws to prevent corruption among the country's top officials have become topics of discussion after the recent bribery scandal in which an MP was charged with accepting a half-million crown bribe.
For years, observers and anti-corruption watchdogs have called for the slashing of the immunity that Slovak legislators enjoy under the existing constitution. 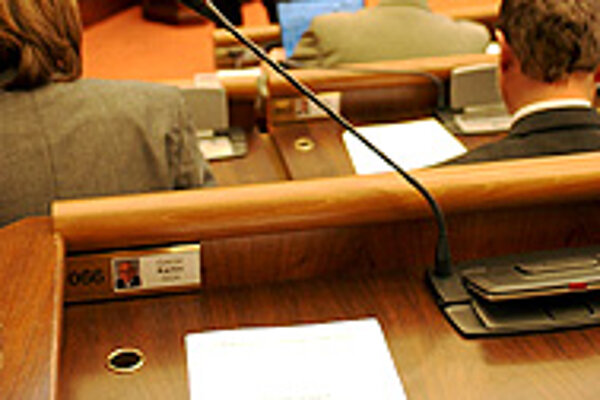 Font size:A-|A+
LIMITING the immunity of Slovak MPs and approving laws to prevent corruption among the country's top officials have become topics of discussion after the recent bribery scandal in which an MP was charged with accepting a half-million crown bribe.

For years, observers and anti-corruption watchdogs have called for the slashing of the immunity that Slovak legislators enjoy under the existing constitution. Parliamentary immunity protects the MPs from prosecution unless their colleagues vote to surrender them to the prosecution.

Passage of another law, the law on conflict of interest, could also be sped up after the recent events.

The law would, among other issues, demand that MPs, cabinet members, and other state and municipal officials publish their property reports and the reports of those living in their household. The law would also introduce a set of post-employment limitations that would prevent officials, for a certain period after leaving public office, from taking lucrative posts in firms about which they decided when in power.

According to Daniela Zemanovičová, program director of Transparency International Slovakia, the case has also revealed flaws in the existing law on public procurement, under which it has been shown that public orders could be subject to bribery attempts.

Gabriel Karlin, a member of the opposition party Movement for a Democratic Slovakia (HZDS), and the head of the office of the Banská Bystrica greater territorial unit (VÚC), Milan Mráz, demanded bribes from one businessman who won a public contract of Sk17 million (€409,000) from the VÚC. Mráz named the members of a commission that picked the winner for the job.

Slovak MPs enjoy a wide immunity compared to the protection other European countries grant their MPs. Justice Minister Daniel Lipšic recently confirmed for journalists that he would propose that immunity be limited to the parliamentary work of MPs.

The minister plans to submit the change as part of the other constitutional changes that the country's EU entry this coming spring makes necessary. To change the constitution, 90 MPs, or two thirds of the country's legislators, would have to back Lipšic's proposals.

"Immunity truly is a problem and it should be addressed by MPs as soon as possible," Zemanovičová agreed.

MPs also agreed that their immunity should be a subject of discussion.

Ivan Šimko, who leads the Free Forum platform inside the ruling Slovak Democratic and Christian Union (SDKÚ) said recently that the affair "opened the question of [narrowing] MPs' immunity."

"I don't think [such immunity] is appropriate in our times," Šimko said.

Independent MP Robert Nemcsics also agreed, saying it was "high time to address the issue of narrowing immunity", in a political discussion on the state-run Slovak Television on November 30.

But Slovak voters have heard similar declarations many times before, observers warned, especially as part of pre-election campaigns, and many of them, including political analysts, have remained cautious about whether the recent statements would finally be put into action.

"Just like with the narrowing of immunity, MPs have said they were in favour of a good conflict of interest law several times in the past, but are now finding the same excuses that prevented its passage before," Zemanovičová said.

Viliam Veteška from the HZDS, and his party peer Viliam Soboňa told media in recent days that, as proposed by the Justice Ministry, the conflict of interest law was not acceptable for them, arguing the draft included anti-constitutional elements.

"We will not support [the conflict of interest] law, not because we want to obscure the property situation [of officials] but because we would prefer to pass this law a bit later, [when it would be] very consistent and precise," Veteška said on November 30.