STUDENTS, scientists, and researchers should look forward to autumn 2004, when the oldest scientific library in Slovakia will welcome its first visitors to its renewed and modernised rooms.
The reconstruction of the University Library in Bratislava started two years ago and should be finished exactly on the 85th anniversary of its establishment. 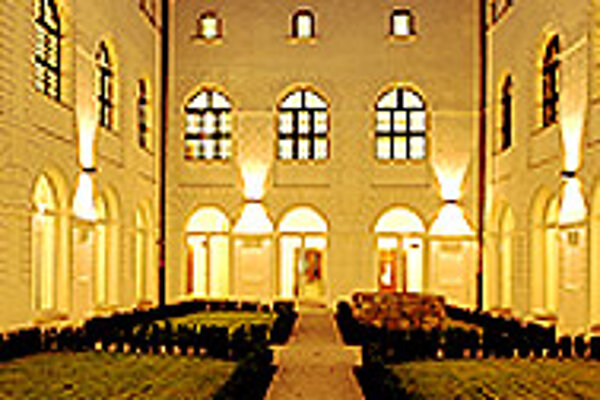 Font size:A-|A+
STUDENTS, scientists, and researchers should look forward to autumn 2004, when the oldest scientific library in Slovakia will welcome its first visitors to its renewed and modernised rooms.

The reconstruction of the University Library in Bratislava started two years ago and should be finished exactly on the 85th anniversary of its establishment.

"The University Library is the oldest scientific library in Slovakia and, with 300,000 annual visitors, it belongs among the three biggest in the country," Tibor Trgiňa, general director of the library, told The Slovak Spectator.

"Since its foundation, its primary aim has been to serve and fulfil the information needs of scientific employees, students, and university teachers. The library now has 15,000 registered readers. After the reconstruction, we hope to increase that number to 20,000.

"The refurbished library will bring Bratislava another attractive place, not only for studying, but also for relaxation and cultural events," he said.

Visitors should feel the change as soon as they enter the historical buildings, which are more than 250 years old. First, they will see a glass ceiling covering the courtyard. Inside the building, a significant amount of space, previously used for book storage, will be opened to guests.

Several elevators in the library will ensure that all rooms are handicap-accessible. Some walls will be removed, which will optically extend the space, and more books will be taken from storage and put on the shelves.

The library wants to build "national corners" devoted to the special scientific literature of certain countries. "We will create corners for literature from countries such as the United States, Great Britain, and Russia. Our library cooperates with all the embassies here in Slovakia," explained the director.

In the library, visitors will also find new information-documentary centres of UNESCO, NATO, the UN, the information office of the Council of Europe, and others.

Important improvements will also be made in the equipment of the library. "Tens of new computers at a value of about Sk20 million (€488,000) will be at the disposal of visitors. In addition to looking for books, they will be able to use the internet or email," said Trgiňa.

The new library will introduce the ALEPH librarian system, frequently used abroad, which will make it easier for foreigners to work there.

"There was space in the library buildings that was not convenient for library use. Although it was previously used for this purpose, mainly for book storage, it was a very harsh treatment of the historical buildings.

"Thus we have decided to create a multifunctional centre. The primary role will be, of course, the modern library, but we would like to open the mentioned space to the public for different cultural activities, like expositions or performances. There will also be a small gallery for young artists and a cafe. Apart from longer opening hours during the working week, the multifunctional centre will probably also be open during weekends," Trgiňa added.

When the reconstruction is finished, the library will have a daily capacity of 1,000 people. The parts of the building open to other cultural activities will be able to welcome about 500 visitors a day.

"The genius loci of this library is its location in the historical town core, which is convenient and accessible to all students and the public," said the director.

"However," he continued, "it makes for stricter reconstruction requirements. These are historically valued buildings. If we want to make any changes we must have the preliminary agreement of the Historical Conservation Office and, of course, we have to keep to its recommendations and conditions."

The amount needed for the reconstruction was planned at Sk361 million (€8.81 million). The Council of Europe Development Bank (CEDB), which has the role of protecting national historical heritage sites, granted a loan with favourable conditions to pay half of the costs.

Trgiňa expects that they will ask for more money: "It is a complex and far-reaching reconstruction. We cannot afford just cosmetic changes, and the last reconstruction was carried out in 1960s, about 40 years ago.

"Furthermore, unexpected events, which you always meet in such a historical place, not only postponed the whole reconstruction [we planned on finishing the work in 2003], but will probably increase the needed investments as well. But it is too early to speak about the exact amount."

The library consists of three historical buildings in the ancient city of Bratislava. They are the former monastery of the Clare nuns, a building of the Hungarian royal chamber, and a palace of the Hungarian aristocrat Leopold de Pauli, which surrounds the rococo Franz Liszt garden pavilion, where the composer once played a concert on 1820.

Most historically valued is the monastery of the Clare nuns, which is believed to hide an old Papal treasure. "We were assigned the task of finding the treasure. There are authentic documents that it was brought there and no evidence of it being taken away. But we have found nothing," said Richard Kubala, construction manager of Hornex, the main contractor carrying out the library reconstruction.

As the storage of heavy books damaged some parts of buildings, the library management had decided to build a new book storage space under Liszt's garden.

The library owns about 2.4 million items - books, magazines, and documents currently preserved in 14 archives in 5 locations in Bratislava and other places. A storage place is thus very important for the library.

The project of underground storage had to be stopped, however. An archaeological site was found during the construction work. Archaeologists uncovered the remains of gothic farm buildings from between the 14th and 15th centuries.

"I am not very optimistic about the completion of the underground book storage space by next November. We will probably have to change the project. We will definitely decide what to do by the end of this year," said đTrgiňa.

"We are, of course, forced to decide whether we will actually construct the storage in that place. Archaeologists have decided that the site has to be preserved, and we are no longer sure the storage would be economically advantageous. But this will not influence the opening date of the library. It's just that the lending process will be slower when a reader requests a book from a temporarily distant storage place," he added.

However, it also played the role of a Slovak national library, because at that time no such institution existed. It started to build a book fund of all publications issued in Slovakia.

"The library has been connected with education since its establishment. Even today, when it is more of a state scientific library, it fulfils the role of an academic and university library, of which there is still a lack in Slovakia. We also keep some rules that are typical for a national library, which was later established in Martin in 1954 [the Matica Slovenska]. We still have the right to a compulsory copy of every item published in Slovakia, and we maintain a catalogue of them. We are also a member of the international lending service," said Trgiňa.