The freedom of constraint

DLHÉ diely, or the Long Fields, is a hilly residential quarter of Bratislava known for the tall apartment buildings that have sprouted on its rolling meadows. Taking the name Dlhé diely as its own, a Slovak band has given the words a new life that combines their old and modern meanings, mixing folk, blues, jazz, trip-hop, and breakbeat grooves. The band is the project of Daniel Salontay, a veteran of the Slovak alternative scene, and Jana Lokšenincová, who records under the name Šina and is a musical newcomer who has not gone unnoticed. 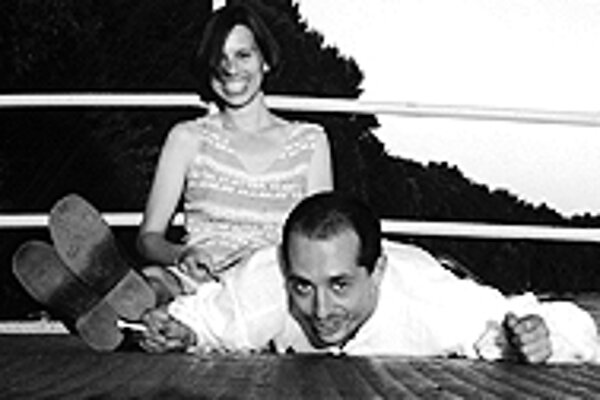 Font size:A-|A+
DLHÉ diely, or the Long Fields, is a hilly residential quarter of Bratislava known for the tall apartment buildings that have sprouted on its rolling meadows. Taking the name Dlhé diely as its own, a Slovak band has given the words a new life that combines their old and modern meanings, mixing folk, blues, jazz, trip-hop, and breakbeat grooves. The band is the project of Daniel Salontay, a veteran of the Slovak alternative scene, and Jana Lokšenincová, who records under the name Šina and is a musical newcomer who has not gone unnoticed.

Hoping to share their work, the two musicians found themselves pushed by the limitations of the Slovak music market to create their own record label, Slnko (Sun) records, two years ago. The result has been an outpouring of quality music, their own and by other artists. Until now, they have burned their label's albums onto CD and packaged them in handmade covers themselves. The technique has proved enough demand for Dlhé diely's albums that the first two have been professionally printed and re-released.

Meanwhile, the label and the band have become the main workday responsibilities of the two artists. Šina manages the label and designs the cover art, and Salontay manages the band - that is, when they are not composing, rehearsing, or performing. The music, they said, is their true commitment, and they do the rest merely because they have to. Indeed, working with restrictions in order to find artistic freedom and creativity is a theme to which they returned more than once in a conversation with The Slovak Spectator.

The Slovak Spectator (TSS): Do you actually live in Dlhé diely?

Daniel Salontay (DS): If we change the name, you'll know we've moved! It's funny, when we were preparing the first album, we had rehearsal tapes from home and on one of the tapes was written 'Dlhé diely spring 2001'. I noticed the tape and thought it would be a good name.

TSS: When you started, did you expect to have a label?

DS: No, we had two recordings ready and then we faced the question of what to do with them.

Šina (Š):I did lots of research on printing and distribution companies, and it's difficult to work with them because we don't have many copies of each album, and they work with big quantities.

DS: So we've stuck with the initial method of burning CDs - baking we call it (laughs) - and distributing them ourselves until now. We were inspired by the idea of print on demand used in the printing industry. We are glad because our aim is not actually a high number of sales but a high quality reception. So if ten people really get it, that's worth the effort and the time.

The technique fulfilled this aim; the handmade editions reached 500 copies. We didn't know in the beginning how it would sell, and now we know that it sells, and stably more or less. So, we know that it's worth investing money. Now we are moving towards a kind of production that's in-between [print on demand and professional printing].

TSS: How many new CDs did you print in this reissue?

Š: 600 copies of each album, and half are staying in the Czech Republic, with the Czech printer and distributor, Black Point music.

TSS: Has it been difficult to manage the label?

Š: It's not hard, but it's new to me and I have to manage, even though sometimes I don't know anything or have any experience. It was a lot of work to develop the burning technique, because, even then, we had all the logistics of a normal publishing company. And now this printing method [with professional packaging] is new for me - like dealing with customs and negotiating with this other guy at Black Point music.

TSS: Are there other labels like yours in Slovakia? Do you see yourselves as part of an independent music scene?

DS: We wouldn't call ourselves the base of the independent scene - we started a label because we wanted to make our music available. But then the label grew a little bit because we had a lot of friends. We saw some friends having difficulties making their music available so we took their work and put it in our catalogue.

A similar label is Deadred records; in fact, we are members of their feature band, Frogski pop. And there is One Man records, a punk label that started with some help and advice from Šina.

TSS: When you pick other bands to release, do you focus on any specific theme?

DS: The quality of collaboration is important; it should be fun and pleasurable for both sides. We're not a shark publisher - we focus on music in its entirety, and all of the artists that are in the catalogue fit with this focus, musically and in their attitude. We help them and they help us when we record. We make things mutually possible.

TSS: Do you have any problem with people burning your CDs?

DS: I don't. For the first several years of Slnko records we were trying to make the music available and so we didn't mind. But now that we are moving toward the printed process, we might mind it. Our CDs are not very expensive, and when we sell the baked CDs and people hear they cost Sk150, which is the direct-sale price, a lot of people say 'I'm buying that; I don't need to burn it.' And then the customer has a homemade cover, which they appreciate.

TSS: Where do you find your influence for the cover art?

Š: A lot of inspiration comes from limitations; we have one laser printer, and it's not colour. It's a challenge to make something that is effective and still distinctive and different from what you find in the CD shops. I try to find nice paper, because if you print only in black, you have to have good material.

TSS: What are your musical histories?

DS: I started by playing jazz and fusion, and I didn't sing then, I only played guitar. In 1995 or 1996 I played on a CD with Richard Müller, and in 1997 I went to the United States for a year to study music in Cleveland at Tri-C College. The school focused on the 'American standard song', which has a very strict structure, and I didn't like it. So I left to find my own way. At that time I started writing words that later turned into songs on the album September. So I learned something there, but not from the school.

After that, I started to look at things in the alternative music scene, and I played in Ali Ibn Rachid, a quite famous or almost legendary Slovak band. Now Dlhé diely and Neuropa are the two bands that I play with. Dlhé diely is the place where I really realize myself as an author, and in Neuropa I realize myself as a wild guitar player (laughs).

Š: I have really only done recordings for Slnko records, three of my own and two with Daniel.

DS: Šina started playing bass in 1997 and finds playing fretless much more comfortable than fretted bass, because she's got a musical ear. She gets very soft, subtle tones and her lines are very original. It's rare to have a bass player who doesn't indulge in muscle moving and up and down playing, and that's the case.

TSS: What about the third member of your band, the mini-disc player? Do you ever feel trapped by the fixed progression of the music and percussion on the disc?

DS: I quit soloing in Cleveland, so I don't have this problem. I think it's a two-sided relationship; we're stuck in the progression, but at the same time it gives us more freedom, in a way. To feel free you need to realize the limits, and within the limits you can feel as free as you want. So in our tunes there is much more improvisation than you would think.

We actually call him Xi Di Nim, with the spelling reversed. A lot of people come to our concerts and ask 'where's the Japanese guy?' He is a very nice member; he doesn't drink, he doesn't ask for more money, and you can make him play softer so the words can be understood. That was the problem when we played with real drums. They got in the way of the voices, and the lyrics are very important for our music. We don't push when singing and the lyrics aren't pushing in their content, so the minidisc helps us focus on the words.

TSS: Have we missed anything?

DS: Most interviewers are interested in the business, but what we do is music. When people who listen to music read about how it is distributed and blah, blah, blah, I think they get bored. Our first aim is to create beautiful music with words that are meaningful and expressive. We do all the rest, the business, the label, managing, and promotion, just because we believe that this music is worth it. All the rest is just normal business; it's just what's necessary.

Dlhé diely will play on November 11 in Poprad at the Crazy Pub, and November 12 in Svidník at the Holičstvo Club, both shows at 20:00.

More information can be found at www.slnkorecords.sk. Outside the country see www.tamizdat.com.