"I'M FULL of antibiotics, excuse my coughs," apologized Swedish-born actress Anita Ekberg, as she came to introduce a restored print of Federico Fellini's La Dolce Vita (1960) screened on the 10th anniversary of the director's death, during the 5th International Film Festival (IFF) Bratislava. Ekberg, 72, energetic, and still very attractive, has made over 70 movies, and La Dolce Vita, in which she plays the inaccessible dream woman, is one of her most prominent 1960s films. 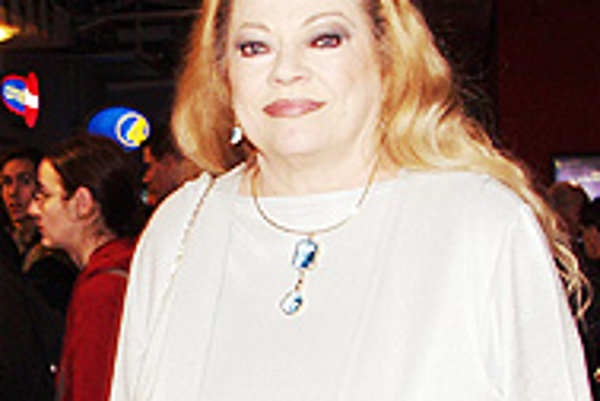 Font size:A-|A+
"I'M FULL of antibiotics, excuse my coughs," apologized Swedish-born actress Anita Ekberg, as she came to introduce a restored print of Federico Fellini's La Dolce Vita (1960) screened on the 10th anniversary of the director's death, during the 5th International Film Festival (IFF) Bratislava. Ekberg, 72, energetic, and still very attractive, has made over 70 movies, and La Dolce Vita, in which she plays the inaccessible dream woman, is one of her most prominent 1960s films.

Despite her being warned that she should not attend the festival at all because of her influenza, she said she was very happy to be back in Bratislava, which she initially visited during the strict communist era in 1965.

"I was doing a film in Vienna, and I wanted to see Bratislava. It was a very sad thing for me, though. I think you might understand why - what that time was in your country. I drove, turned around, and went back [to Vienna]. When I came out of customs, I had to stop the car - I was crying. I was shaking with emotion for what you went through," she recalled.

"I told myself that I was not going to tell you this story. But I think it's right that I have, as I am very happy to see how much it has changed for the better."

When introducing the film's new print at the festival, Ekberg demonstrated her great sense of humour, her ability to capture the attention of the audience, and her improvising skills. "Am I supposed to say anything?" she asked the festival's president, Milan Kňažko, as he showed her to the microphone. Then she turned to the audience and asked the people to give her some questions.

Improvisation was also what Fellini, a distinguished director with his own unique style, wanted of her. In her official press conference, Ekberg directly addressed a misconception that many people have about her career: that it started with La Dolce Vita.

"It's not true at all that my career and my fame started with La Dolce Vita. My career started by chance, in California. I'm considered an American actress, not Swedish, and definitely not an actress that was made by Fellini. I'm rather tired of hearing that Fellini made me," she said, explaining that it was Fellini who wanted her for the film because she was already famous all over the world. "Maybe not in your country yet."

At the age of 19, Ekberg became Miss Sweden and soon left the country for California. She spent 13 years there, during which she made 45 films and played with such stars as Dean Martin, Rod Steiger, and Frank Sinatra. Three years after working with Fellini on La Dolce Vita in 1960, she decided to move to Italy. Currently, she lives near the Pope's summer residence, some 35 kilometres from Rome, with her four dogs.

"When I did La Dolce Vita, I was still under contract to a studio in California. I wanted to buy out my contract - gain my freedom - because, being European, I wanted to be back in Europe," said the actress, whose Scandinavian "ice-cold" look gained her the nickname Iceberg, despite her claims of having southern blood.

Despite the rumours about Fellini's many love affairs, the relationship between him and Ekberg was that of two friends. "If you refer to a man and woman having a sexual relationship, or a love affair, there was nothing like that between us. I can absolutely assure you he had wished there was, because he did fall very much in love with me, but I already had the biggest love of my life. And [Fellini] was not my type of man," she said, seductively tossing back her rich blonde hair.

And what is it like to be the ideal of every man? "That's a hell of a question," she said. "Tell you what - I've never thought of that. I'm quite a normal person. They call me diva, they call me star... but I don't consider myself as such. If people think so, well, thank you so much."

Even though Ekberg does not personally associate with the movie business, she is still involved in it. Lately, she has done some movies, though only as a special guest. The reasons for these small roles, she says, are that there are no good scripts being sent around and producers keep crying about having no money.

"Let's make some beautiful movies here! I wouldn't mind at all."