THE BLACKSMITH tradition in the municipality of Dunajská Lužná, near Bratislava, is several hundred years old. Maybe that is why the place is called the "iron village".
"It's been said that smiths are tough people. But they are very sensitive in their hearts. When you work with fire in a forge all day, meeting with people is rare for you. 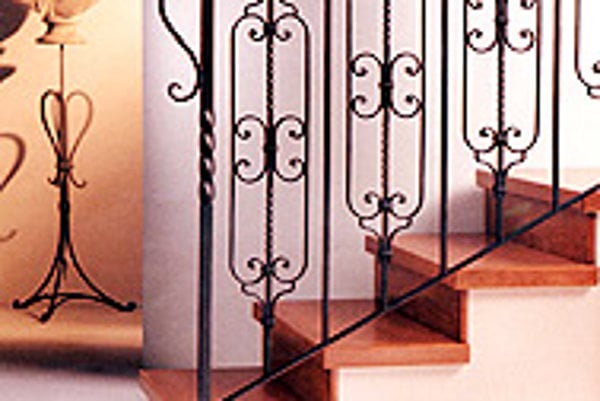 Font size:A-|A+
THE BLACKSMITH tradition in the municipality of Dunajská Lužná, near Bratislava, is several hundred years old. Maybe that is why the place is called the "iron village".

"It's been said that smiths are tough people. But they are very sensitive in their hearts. When you work with fire in a forge all day, meeting with people is rare for you. Then it's interesting to see how sensitive a 150-kilo smith can be. It always surprises people," says Róbert Rigo, an artistic blacksmith from Dunajská Lužná.

Rigo, 50, has been around smithery since his childhood. "When I was five, I got in touch with everything that belongs in a smithy. My work is just a continuation of the tradition of my father and his predecessors. Smithery has provided us work for generations, and it has given us the possibility to be part of society," he says.

What initially seems an innocent remark has much deeper connotations for the smithery business in Dunajská Lužná, as most of the local smiths are Roma.

"When a person has work, society receives him differently. It respects him. Our ancestors used to be stud-makers, nail-makers, and horseshoe-smiths. They produced, for example, parts of horse harnesses and forgings for carriages - basically everything that the local peasants, who formed the majority, needed. And so, in everyday life it was impossible to discuss ethnic differences. Cooperation was necessary for survival. This has remained with us today," Rigo explains.

At present, Dunajská Lužná has around 14 separate ethnic groups that live in absolute harmony with one another. Of the municipality's roughly three thousand inhabitants, around 400 are Roma citizens.

"A strange thing that astounds people is that the local Roma master smiths employ non-Roma in their workshops. It's an anomaly in our society that people usually cannot understand. But I think it's normal. We work together; we are friends, colleagues. It's rather strange to us if somebody wants to force a different way of living upon us," Rigo says.

"Here, in the village, I don't feel that somebody would consider me to be a different kind of person just because of the colour of my skin. I'm a person in whom one can see the drive to work. I respect everybody, and I feel that everybody respects me," he says.

He admits, though, that his origin is not viewed as simply throughout Slovakia as it is in his home. "You know - scornful [looks], everybody can feel that. And particularly we Roma do. As if we had a sixth sense specially developed for it," says Rigo, who has experienced discrimination several times and solved it his own way: by never meeting with that person again.

According to estimates based on the development of smithery in the region, the roots of the craft within Rigo's family go back 300 years.

"Roma have never kept written records. But the entrance to the St Martin Church leads to a place where Roma have lived for ages. And the church was built in the 14th century," Rigo concludes.

It is to sometime in that period that the smith roots of the Rigo family, as well as other prominent smith families - Šárkozi, Šipoš, and Daniel - might reach.

"My ancestors have never been without work. Many people in the surrounding areas remember them with respect," says Rigo, recalling how he always had to be at their disposal, to assist them if they needed anything.

"If I wanted to go and play football, I had to run at 100 kilometres per hour so that my grandpa or my uncles didn't stop me. Otherwise I would have to cut iron for one, get cigarettes for another one, or wrap their products. At that time, we had great respect for our elders; it was impossible not to obey. Just a hint that they needed anything was enough, and we had to act. Today we miss these people very much. The oldest blacksmith, who died two or three months before communism fell (in 1989), used to say: 'Boy, it's not going to work this way, this republic cannot continue like this...'"

According to the tradition in Dunajská Lužná, each smith has a forge at his house. Even during communism, when they founded a cooperative in Bratislava, the smiths continued working at home. They divided the work among themselves, brought it home, and, at the end of the month, they returned with the finished products. "They didn't allow the tradition to break off."

Currently, there are nine functioning forges in the municipality. Until recently, there were 15. Some merged together, some stopped producing. They employ around 50 to 60 people, sometimes up to 80, depending on the amount of work. "They are very important for regional development," says Rigo, who, in 1999, founded the Smith Courtyard Hefaiston to commemorate his smith predecessors.

And what do the smiths in Dunajská Lužná produce today? Everything from small candleholders to wardrobes and beds. "Everything that is made of plastic and wood can also be made of iron. Chandeliers, decorative roses, bouquets... night tables, benches, exterior and interior furniture," states Rigo.

He has traded very actively since 1990, mainly with Italy. Today they have a smoothly-running catalogue sale there. But the products of his firm can be found throughout the world: France, Russia, Germany, Greece, the USA, Australia, and Canada. According to Rigo, foreigners show great interest in artistic smith's products.

"We are slowly preparing for Slovakia's entry into the European Union. In practice, ithist means that we must not only produce, but also form our own skilled management that would be able to attract more orders," he says, despite the fact that the smiths in Dunajská Lužná already work on hundreds of foreign orders. He knows that more orders mean more work for his people, as well as more chances to be fully accepted by society.

"We have to reevaluate our approach towards what we can create with our own hands and quickly get to the level the EU expects us to be on," he says. He says it also because he would like to pass his art and firm to his son, who has been working with him for six years.

"It's necessary to invest in children, in the education of Roma children. That's why I am attracted more and more to work in the third sector. I would like to pass on the skills that I have gained as an adviser for the government commissioner on Roma issues, and as a chair member of the Helsinki committee," Rigo says.

He would like to teach the art of smithery to many young Roma. He thinks that one-year re-qualification courses, financed by the state, could help young people in many localities and provide them with more opportunities in life.

Rigo knows that his foreign clients do not mind that he is Roma. He makes an honest living. But he wants more than anything to ensure that Roma are also appreciated in his home.

Mária Hušová is a reporter for the Roma Press Agency in Slovakia.

What: Flame - display of blacksmith products.
When: Daily from 16:00 to 21:00, from December 9 to 15.
Where: Quo vadis, Evanjelizačné centrum (Evangelical Centre), Hurbanovo námestie 1, Bratislava.