SEVEN MPs of the Slovak Democratic and Christian Union (SDKÚ) headed by former Defence Minister Ivan Šimko quit the SDKÚ and its parliamentary caucus and announced the launch of their own party at the start of the new year. Former member of the New Citizen's Alliance (ANO) coalition, Branislav Opaterný, currently an independent MP, joined the initiative, enabling the group to launch its own parliamentary caucus, which has to have a minimum of eight members. 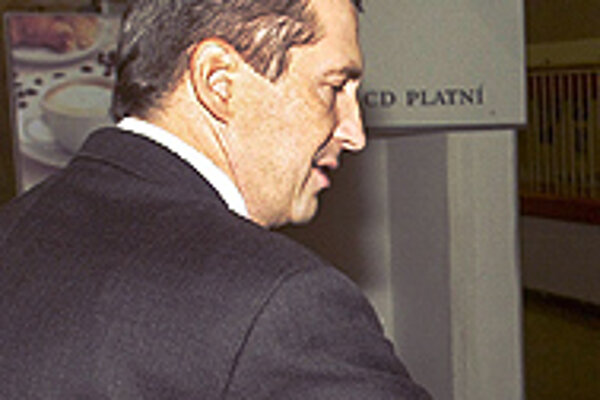 Font size:A-|A+
SEVEN MPs of the Slovak Democratic and Christian Union (SDKÚ) headed by former Defence Minister Ivan Šimko quit the SDKÚ and its parliamentary caucus and announced the launch of their own party at the start of the new year. Former member of the New Citizen's Alliance (ANO) coalition, Branislav Opaterný, currently an independent MP, joined the initiative, enabling the group to launch its own parliamentary caucus, which has to have a minimum of eight members.

The news comes after weeks of tensions within the SDKÚ. The ruling coalition now officially has control over only 68 of the 150 members of the legislature.

Although uncertainty remains, Šimko's party is likely to become the fifth member of the ruling coalition, according to insiders.

"The SDKÚ is in a deep crisis. Mikuláš Dzurinda does not admit any mistakes, and his attitude towards the party as well as towards coalition partners is irresponsible," said Šimko at a press conference on December 8.

"To stay in the SDKÚ would mean to resign [to flawed] values," he added.

The conflict between Šimko and SDKÚ boss Dzurinda first erupted in early fall. On September 10, Dzurinda proposed that Ján Mojžiš, head of the National Security Office (NBÚ), be recalled from his post.

Šimko, who was defence minister at the time, claimed that Dzurinda failed to present sufficient grounds for Mojžiš's withdrawal and refused to back the PM's proposal.

Due to his missing vote, Mojžiš stayed in office for the time being, although he was finally pulled out some weeks later, after a reconstruction of the government (for more on Dzurinda and Mojžiš see page 2).

Immediately, Dzurinda asked his party to strip Šimko of his ministerial seat and of the post of SDKÚ vice-chairman, claiming that "responsibility" towards one's party and "party discipline" should be the key imperatives of cabinet members.

The party's top body satisfied the request on the very day the cabinet voted.

Šimko, who masterminded the creation of the SDKÚ along with Dzurinda in 2000, has since argued that the party has gone astray, betraying the democratic values that it had stood for in the past.

He accused Dzurinda of using authoritarian methods within the party, acting on the wishes of special interest groups, and hindering free debate.

Šimko and a group of his supporters first declared that they would try to reform the party from within. On November 17 they formed the Free Forum (SF) as a platform for internal SDKÚ discussion.

"The SF said that they lack free discussion, but at the same time didn't attend official meetings of the party's bodies, where there is such discussion," SDKÚ vice-chairman Ivan Mikloš told The Slovak Spectator.

The SDKÚ leadership refused individual talks with its opponents until December 1, when all coalition MPs and ministers met to discuss the draft budget for next year. Then, the PM agreed to hold talks with his critics.

After Dzurinda's meeting with Šimko on December 5, it was obvious that a definite split within the largest coalition party was only a question of time. According to some media reports, at the meeting Dzurinda asked Šimko to publicly apologize for his steps and declare his previous actions a mistake.

"Unfortunately, the discussion showed that we both see things differently and that there is no way to reflect on the decisions of the SDKÚ party bodies," said Šimko after the meeting.

SDKÚ officials say Šimko has presented no examples - other than the case of his own withdrawal - of SDKÚ deviation from its original values.

"The SF says that they are interested in seeing the SDKÚ programme fulfilled. That raises the question of what we are doing that is going against the programme. And I have not heard an answer to that," said Mikloš.

Dzurinda called Šimko's move "dishonest" and "unfair", claiming Šimko is only after personal gain, and said he would not allow himself to be blackmailed.

"Any changes in the cabinet are out of the question. No seat in the government is vacant. Even if it were, it would only be up to the SDKÚ bodies to decide," said Dzurinda.

However, Šimko said he is dissatisfied mainly with the methods the SDKÚ uses. He has ruled out the possibility that he or his newly forming party are interested in any governmental seats.

Šimko's supporters have repeatedly said that they are only interested in "practicing democratic control of the government", without further specifying what exactly that means.

It is up to the ruling parties to decide what will happen next, said Šimko, who no longer feels a part of the coalition.

However, his former colleagues are uncertain about what comes next.

Insiders agree that there are two alternatives for further developments: early elections or a reconstruction of the coalition agreement.

The first of the two would not help either of the two key players. Šimko will only start his new party next year and has taken no clear stand on major issues. He has made no indication that he favours early voting, but rather has stressed that he stands by the government's manifesto and the SDKÚ's election programme.

"We will act very responsibly," he said. The newly independent MPs have also voiced support for the coalition draft budget.

The opposition Smer party, with the support of some 26.5 percent, according to the same survey, is the most vocal supporter of early elections. "Dzurinda is a disappointment not only for the people, but also for his own MPs, who have found the strength to stand up to his machinery of cronyism and to his arrogant style of pushing through the interests of the powerful," said Smer vice-chair Monika Beňová.

"This form of ruling is unacceptable in a democratic society. Smer therefore continues to see the solution to today's situation in early elections," she added.

None of the three other coalition parties - the ANO, the Hungarian Coalition Party (SMK), and the Christian Democratic Movement (KDH) - have voiced major objections to making Šimko's party a fifth member of the coalition.

"There is no other way," said KDH chairman Pavol Hrušovský.

That would mean that the coalition agreement, in which the ruling parties agreed on the distribution of the top administration seats and decision-making mechanisms of the coalition, would need to be changed.

Although Dzurinda has said Šimko cannot hope to get a seat in the cabinet, there are other posts that could be offered to the new party.

The coalition has yet to find a replacement for Mojžiš, who headed the NBÚ. Some analysts indicate that the intelligence service, which, currently under Ladislav Pittner, has found itself involved in numerous controversies, could also get a new boss.

Interestingly, when Pittner left the seat of interior minister in 2001 due to "health reasons", it was Šimko who took over the ministry.

Among the former SDKÚ members planning to launch the SF is deputy speaker of parliament Zuzana Martináková.

When asked whether she would leave her post voluntarily, Martináková replied, "if the SDKÚ raises such a demand, I will resign."

PM Dzurinda has said that he expects the breakaway group to act in line with the election programme that paved their way into parliament and therefore sees no reason for Martináková to leave her post.

If Martináková is forced out, finding and electing a replacement for her may not be easy. One of the four deputy speaker of parliament seats has been vacant since September, when ANO boss Pavol Rusko left parliament to take over the Economy Ministry.

In two rounds of secret elections the parliament failed to elect Ľubomír Lintner, nominated by the ANO to become Rusko's successor, to the position. No other candidates have been presented since.