PRESIDENT Rudolf Schuster left an applauding opposition and a stone-faced ruling coalition following his annual address on the state of the republic held on December 5.
Repeating applause from the opposition benches was heard throughout Schuster's one-hour speech, which was perceived as highly critical of the ruling coalition, specifically towards Prime Minister Mikuláš Dzurinda 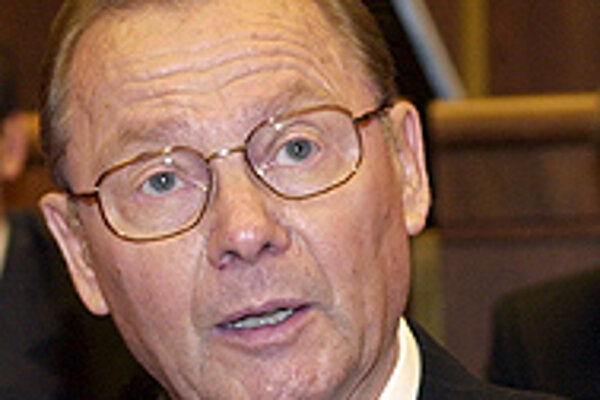 Font size:A-|A+0
PRESIDENT Rudolf Schuster left an applauding opposition and a stone-faced ruling coalition following his annual address on the state of the republic held on December 5.

Repeating applause from the opposition benches was heard throughout Schuster's one-hour speech, which was perceived as highly critical of the ruling coalition, specifically towards Prime Minister Mikuláš Dzurinda. Some observers also saw the address as the president's probe for pubic reaction that, the speculation went, would help Schuster decide whether to repeat his candidacy for the seat of head of state.

"From the speech it was possible to deduce that it was [Schuster's] internal drive to try and see whether he will run for the presidential post again. It is likely that the final decision will be made later depending on what the public reaction is to his speech," Ľuboš Kubín, an analyst with the Slovak Academy of Sciences, said to The Slovak Spectator on December 8.

In the speech, which was subdivided into seven parts, Schuster criticized the ruling coalition over what he deemed uncoordinated reforms that will negatively impact socially weak citizens, including pensioners and young families.

He scorned the health reform, social and pension systems reforms, and the tax reform. He repeatedly expressed his discontent with the cabinet's decision to sell state stakes in strategic firms.

He warned that the cabinet spoke much about, but did little for, the encouragement of small and medium-sized firms, which, according to Schuster, are an important economic power that would help Slovakia's growth in the EU.

Schuster also accused Dzurinda of abusing power, as he addressed the prime minister with a direct question - asking whether Dzurinda did not feel responsible for people's lost trust in "those who run the state".

"It is as if the prime minister were thinking only of his party's gain; he often creates alliances within the coalition in an effort to make decisions without some of his partners.

"People's trust in politics and politicians is shattered," Schuster said in his speech.

Initial reactions confirmed that the president has pleased the opposition with his scorn for the ruling parties. The coalition MPs and top cabinet officials, dismissed Schuster's speech. It was as if it came from the "mouth of an opposition or a union leader", said Economy Minister Pavol Rusko, the head of the ruling New Citizen's Alliance (ANO).

In reaction to the president's address, mainly regarding Schuster's criticism that the country lags behind its soon-to-be peers in the EU economically, Dzurinda said that "this lagging behind clearly did not originate in the previous year but rather under the previous [communist] regime, of which [Schuster] was one of the leading representatives."

At another point in his address, Schuster complained that politics in Slovakia has become a matter of unconditional party obedience in which "in the interest of party discipline, [the cabinet] weakens itself by getting rid of skilled ministers and by bending the characters of those who decide to stay despite the price [that they pay]," Schuster said.

At the start of October, Dzurinda recalled his own party's cofounder Ivan Šimko from the post of defence minister after Šimko refused to support the recall of head of National Security Office (NBÚ) Ján Mojžiš.

Šimko then founded the Free Forum platform inside the Slovak Democratic and Christian Union (SDKÚ) and recently announced that he is leaving the party (see story, page 1).

Schuster noted that the cabinet pays little attention to the opposition or civic associations and warned that "those who rule do indeed have the biggest responsibility, but that does not mean that they are always right."

Analysts have been largely critical of the president's words; political analyst Miroslav Kusý deemed his speech "populist". Many other analysts agreed that the president's address was unbalanced and even aggressive towards the cabinet and its policies.

Ľuboš Kubín, an analyst with the Slovak Academy of Sciences said to The Slovak Spectator on December 8 that Schuster's criticism of a wide range of reforms - including the pension system, health care, education, and the coalition's economic policies, which include the tax reform and the plan to privatize strategic firms, was a "direct attack on the cabinet's program".

"The president has attacked the crucial reforms of this cabinet, which received its mandate in a proper election and whose program was confirmed by a parliamentary vote," Kubín said.

"From his position as a constitutional official, President Schuster is interfering with the cabinet's policies," the analyst added.

Regarding the criticism of his frequent vetoes of cabinet laws, Schuster said he vetoed with such frequency because laws he had received from parliament were "unsystematically prepared without analyses, coordination, and expert evaluations".

He also said that "only my political tact prevented me from talking publicly about how many laws I returned to parliament after a direct request to do so by cabinet members and coalition MPs.

"At the same time, I tacitly carried the burden related to that."

Schuster stressed social issues throughout his address and maintained that the cabinet and MPs in general should bear in mind that "the differences between incomes of Slovak families are very considerable."

Schuster even said that he did not fear actions being run by the union leaders.

"I fear protests and spontaneous public unrest much more; they could be very dangerous," Schuster said.

Apart from comments that the speech proved the president's left-wing political conviction, Schuster has faced accusations of starting his campaign for the presidential post in the televised address.

However, at a press conference after the speech, Schuster insisted to journalists that he had "not yet made a single step towards the campaign".

After a weekend of continued criticism of Schuster's speech, presidential spokesman Ján Füle said to The Slovak Spectator on December 8 that "the president was surprised at the criticism because many coalition officials denied their own previous criticism [of the situation in the coalition]."

"But this is not important anymore.

What is important for the state is to see what happens with Šimko and how the coalition will work," Füle added.