No pain no gain

YOU CANNOT slash the deficit and speed up the economy without deep structural reforms, and Slovakia is the perfect example of how politically demanding these reforms are. They mean taking unpopular steps that only later bring positive effects, said Finance Minister Ivan Mikloš in an interview with The Slovak Spectator. Mikloš and the ruling coalition still face one of their toughest tests, the adoption of the 2004 state budget. 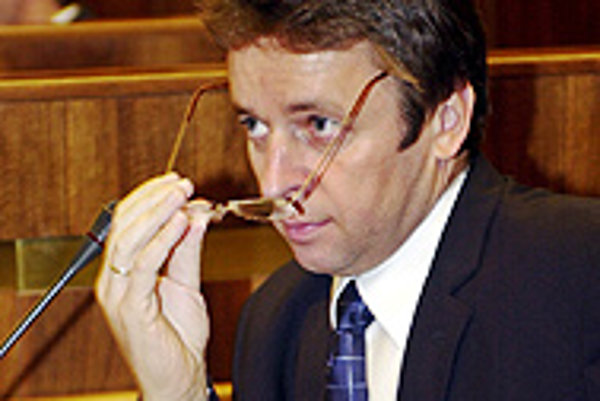 Font size:A-|A+
YOU CANNOT slash the deficit and speed up the economy without deep structural reforms, and Slovakia is the perfect example of how politically demanding these reforms are. They mean taking unpopular steps that only later bring positive effects, said Finance Minister Ivan Mikloš in an interview with The Slovak Spectator. Mikloš and the ruling coalition still face one of their toughest tests, the adoption of the 2004 state budget.

The Slovak Spectator (TSS): Despite a presidential veto, the flat tax rate, which has already inspired the interest of foreign investors, has become a reality of the Slovak business environment. What will it bring to the Slovak economy?

Ivan Mikloš (IM): The tax reform is a crucial part of the structural reforms that are to improve the business environment, increase economic growth, create new jobs, and inspire investments.

The tax reform installs a simple, neutral, transparent, and just tax system. It eliminates numerous exemptions and brings stability to the overall system. Small and medium-sized businesses have not been complaining as much about high taxes as they have about the instability, frequent changes, vagueness, and complexity of the tax legislation. The new tax system eliminates the controversial regulations, exemptions, and special tax regime. Thus, it slashes avenues for tax evasion and limits the motivation to risk evasion. It was the complication of the system that made evasion possible.

Another important facet of the reform is that it reduces the tax burden from direct taxes and moves it to excise taxes and value added tax (VAT), which means lower taxation of production and higher taxation of consumption. This promises to bring positive effects.

TSS: What would be your message for those who claim that the tax reform harms low-income groups, which was the argument President Rudolf Schuster gave for returning the law to parliament?

IM: It is not true. We have certainly made calculations of the impacts on different income groups. Basically, only those who are single, without children, and with a medium income, from Sk10,000 (€244) to Sk20,000 (€487) a month, will see their real income mildly drop after excise taxes and VAT rise, and prices are deregulated. For all the other groups - low income, families with children, and high-income clusters - the tax burden will ease and income will climb. However, the income drop of the medium income group will not be serious, presumably between 1 to 3 percent. After all, it will only balance the disproportion between the high income of single people without children and the income of people with families and children.

The flat tax rate is more just. Certainly, the view of leftist parties will always differ from the attitudes of those oriented to the right and who consider the equality of opportunities to be a basis for a socially just environment. I think that the current progressive taxation punishes success and discourages people from increasing their output, which has a negative impact on the performance of the economy.

TSS: What other reforms are in the pipeline for the business environment?

We also face a fiscal decentralization, which means changes to the tax system giving more muscle to regional governments for the collection and administration of taxes.

TSS: The state budget is viewed as the ultimate test of the ruling coalition's unity. The claims of the coalition partners have climbed to an additional Sk850 million (€20.73 million). Where will you find the money to satisfy these demands?

IM: We have found the money. However, this does not mean that we had some concealed reserve, as media often reported. We have found Sk650 million (€15.84 million) through decreasing the cabinet reserve and making some transfers between state budget chapters by moving the money from less urgent pockets to high priority ones. We plan to get Sk200 million (€4.87 million) by increasing the excise tax on tobacco by Sk1 (€0.02) per pack of cigarettes as of the day we enter the European Union.

TSS: Once passed, the president might return the law on the state budget to parliament.

IM: Well, it is in his hands. The president claims that not only farmers, but also the education, culture, and health care sectors are in urgent need of money. There is nothing easier than to produce debts. It would be very bad if Slovakia took this irresponsible path. The key is to keep the deficit low.

TSS: The South-Korean carmaker Hyundai is deciding between Slovakia and Poland as possible sites for its European investment. What are Slovakia's strengths in the competition for strategic investment?

IM: Certainly it is our advantageous business environment, promising tax reform, cheap but highly qualified labour along with a dynamic labour market, and geographical position. I accept that it is an extraordinary strategic investment in which it is necessary to offer special investment stimuli, as happened in the case of PSA Peugeot-Citroen in Trnava. But at the same time, I am confident that such stimuli should be offered only in special cases, when the importance of the investment along with direct and indirect effects on other departments will finally compensate the country.

TSS: At the end of November, the ministers with economic agendas proposed changes to the strategy of national support for investments, and the conditions for support for the construction of industrial parks have also been modified. What are the most important changes?

IM: Until now, the law required regional governments to cover 30 percent of the costs of the construction of industrial parks. Now the regional governments will share only 10 percent of the costs. Before, at least two investors had to promise entry to the park. Now, a single investor promising to start a business there makes the area eligible for support. We have softened the conditions, which were far too tough to boost the number of parks.

TSS: In late November, you opposed softening the rules of the European Union Stability and Growth Pact in association with shelving the disciplinary proceedings against Germany and France, which have failed to keep their obligations to push down their deficits. What were your main arguments? Will Slovakia be able to meet the Maastricht criteria?

IM: My main concern was that the whole project of the euro as the single currency depends on this pact. If the strongest countries with an enormous impact on the European economy fail to keep this key EU project, its stability could be endangered. The problem has deeper roots. You cannot slash the deficit without deep structural reforms. Slovakia is the perfect example of how politically demanding these reforms are. It means taking unpopular steps, which only later bring positive effects. Germany and France are also struggling because in order to meet the pact, they have to reduce their public finance deficit in a time of recession, which is always more difficult to do.

TSS: The annual report on the state of the republic that President Rudolf Schuster delivered to parliament on December 5 was praised by the opposition but criticized by the ruling coalition and media, who called it populist.

IM: I consider the report fallacious and full of populist remarks and demagoguery. I could talk volumes about it, but I will pick only the most important things. The report reproached the cabinet for Slovakia's low economic level, saying that Slovakia has reached only 48.6 percent of the EU's average GDP. Our economic position is entirely the aftermath of the communist regime. I intentionally emphasize the word 'entirely', because sometimes the words 'also' or 'mainly' are mistakenly substituted for it. Between 1918 and 1948, Slovakia had a higher economic growth than the current EU countries had. Between 1948 and 1989, our economic growth was considerably lower than that of the EU countries, and between 1990 and 2003, Slovakia posted a higher growth rate than the EU countries. Last year, this growth hit 4.4 percent, while in the EU, growth was at 1 percent. Again, the communist regime is to be blamed. [ed note: Rudolf Schuster served as a high official of the Communist Party before 1989.]

Mr. President also said that we [Slovakia] have the worst economic results among the Visegrad Four countries. The opposite is true. According to all the economic indicators that are positive when they grow, we have been posting higher growth. And in those that are positive when they shrink, we posted the fastest decrease, such as in the current account deficit, the public finance deficit, and unemployment.

Mr. President also claimed that, though unemployment has been dropping, employment has not been rising. This is not true. Numbers document the opposite. Employment is considerably increasing.

But there is one very specific thing that has turned into a common comment in Slovakia: When he tried to find something to praise the cabinet for, he picked foreign policy. Basically, his speech sounded as though in foreign policy we had done everything right, while at home we had done everything wrong. If that were true, that we have only been making mistakes at home, we could hardly be able to excel abroad and achieve international successes like entering the OECD, NATO, and the EU. The thesis that it is possible to spoil everything at home but still have a gleaming image abroad simply does not work.