DIFFERENT regions, different ethnicities, and different religions in Slovakia traditionally had different Christmas dinners. Some menus shared various courses, but no course appeared on all of them.
After wafers or bread with honey and garlic, most families would start the dinner with kapustnica - cabbage soup (The Slovak Spectator published a recipe in Vol 8 No 49). Some families living near the Hungarian border had fish soup. 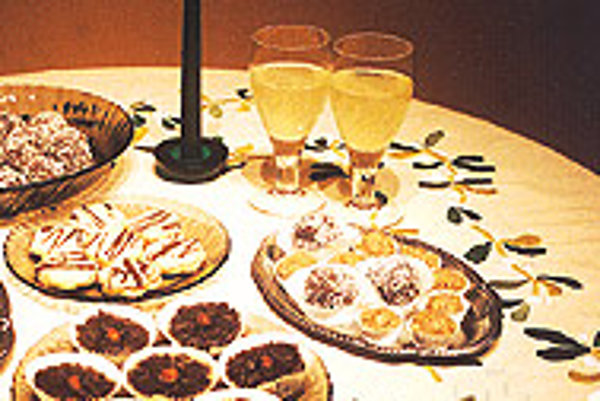 Font size:A-|A+1
DIFFERENT regions, different ethnicities, and different religions in Slovakia traditionally had different Christmas dinners. Some menus shared various courses, but no course appeared on all of them.

After wafers or bread with honey and garlic, most families would start the dinner with kapustnica - cabbage soup (The Slovak Spectator published a recipe in Vol 8 No 49). Some families living near the Hungarian border had fish soup. The west and centre of the country would then continue the feast with carp and potato salad, while the east, mainly the Ruthenian ethnicity, followed with pirohy s kapustou (boiled dumplings with cabbage). The special bobaľky or pupáky s makom (small balls of dough sprinkled with poppy seeds) could also be found on some menus.

Today, the most ordinary Slovak Christmas dinner starts with prípitok, (toast, which used to be the traditional greasy hriatô, but nowadays anything works just as well), followed by wafers with honey and garlic, and optionally the poppy-seed bobaľky. Then come the main courses: kapustnica eaten with potatoes or the special vianočka pastry, and fried carp with potato salad. After a moment of relaxation, a rich palette of various cakes arrives. This Christmas, The Slovak Spectator has decided to bring you closer to the sweet part of the Slovak Christmas. With help from Slovak mothers and grandmothers, we have compiled the most typical and easiest Christmas cake recipes, including those for bobaľky and vianočka.

When Ľubica Karpatyová married a Spiš native in whose family it was a custom to eat the sweet vianočka along with Christmas cabbage soup, she had to learn how to bake it. She found the recipe in what is today an almost 30-year-old book, and has been baking it accordingly ever since. Here it is:

Warm up the milk to body temperature, and add three small spoons of sugar, and pinches of yeast. Let the yeast rise to the top. Pour it into a mixture of the flour, Hera, icing sugar, three egg yolks (keep the whites for later), raisins, salt, and grated lemon peel. Make the dough harder and thicker (beat it by hand or mix it in a mixer for 30 minutes). Sprinkle flour on the top (so it does not dry out) and let it rise on a warm place. Put the dough on a board and divide it into eight equal parts.

Braid the first four rolls together in a flat braid (Pic 1). Put the braid on a greased baking pan and brush beaten egg whites over it. Then braid three rolls together, put them on the four-roll base, and coat them with egg white (Pic 2). Cut the last roll into two pieces, roll them thin, braid together, and put the braid on the top. Press the braids together at their ends, and brush beaten egg over the whole vianočka. Let it rest while preheating the oven. First bake it at a high temperature until it forms a brownish coat (around 20 minutes), and then continue at a lower temperature so it gets baked from the inside. Check it with a skewer - when the dough stops sticking to it, it is ready.

Called bobaľky in Slovakia's east and pupáky in the country's north and west, this dish is begun a week before Christmas. Bake the small dough pieces first, leaving them to cool and harden until Christmas, when they are served scalded with hot water or milk. Some eat them at the end of Christmas dinner, some after the wafer starter. Some add butter or oil, but the tradition preserved by Helena Tkáčová from the east does neither. Here is her recipe:

Mix the yeast with 0.1 litre of lukewarm milk, a tablespoon of sugar and flour. Leave it to sour for a while. Pour it into the flour, add egg, salt, and gradually add milk. Make smooth, thick dough (it is ready when it stops sticking to your hands). Let it rise in a warm place. Put the dough on a board and make a roll the width of the board. Cut the roll into pieces. Hand-roll the pieces into rolls with a diameter of 1 to 1.5 centimetres. Cut these again into 1 to 1.5-centimetre pieces - the bobaľky. Lay them on a greased baking pan so they do not touch each other, as they will rise in the oven. Bake them at the highest temperature for around 15 minutes (when breaking them the dough inside cannot be raw). Take them out of the oven, dump into a bowl and cover with a cloth. Let them cool and harden until Christmas.

On Christmas, gradually pour one litre of boiling water with three tablespoons of sugar on the dried bobaľky. First, let them soak in a smaller amount of water. Add water until they are soft, but not too sodden. Sprinkle with ground poppy seeds, and add honey.

Drown the sponge cakes in milk, let them soak. Add the other ingredients (only about 50 grams of coconut powder though), apart from the canned fruit, and mix it together. Form little balls with a cherry or a piece of pineapple inside, covering them in coconut powder.

Make dough from all ingredients, apart from jam and chocolate. Roll it out on a board and cut shapes out of it. Join two identical pieces together with the jam. Bake at 150 degrees Celsius for a while, until golden brown. Melt the chocolate and gently pour on the baked cakes.

Slowly cook all ingredients for the dough in a pot over steam. Let the sponge cakes soak in the milk, add the other ingredients, and mix them together. First put a spoon of the melted dough into a paper basket, add a spoon of the filling, and again put dough over it. Decorate with walnut or almond on the top.

Mix all the ingredients together to make dough. If you prefer variability, divide the dough into three parts; leave one part as it is, add grated cheese to the second one, and spices (caraway, or any kind of dry herbs) to the third one. Let the dough settle during the night. Out on a board, roll the dough out to a height of one centimetre, and make shapes out of it (simple round shapes can be cut out with a glass). Put brush-beaten egg yolk over the pieces before baking, and add walnuts, almonds, or caraway seeds on the top. Bake them for 15 minutes at 220 degrees Celsius.