OFTEN referred to as the "rooftop of central Europe," Slovakia encompasses the northwestern end of the Carpathian Mountains. Eighty percent of Slovakia is over 750 metres above sea level, and its highest mountain reaches the 2,655-metre mark. These mountains, along with the country's relatively cool, continental climate, make Slovakia ripe for ski area development. 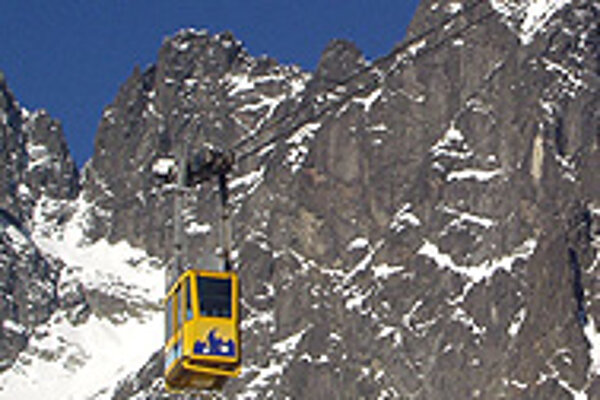 Font size:A-|A+0
OFTEN referred to as the "rooftop of central Europe," Slovakia encompasses the northwestern end of the Carpathian Mountains. Eighty percent of Slovakia is over 750 metres above sea level, and its highest mountain reaches the 2,655-metre mark. These mountains, along with the country's relatively cool, continental climate, make Slovakia ripe for ski area development. The mountains of Slovakia used to be mined for silver and other metals; in the future, Slovakia may be mining those mountains for a different type of gold: tourist dollars and euros.

Currently, Slovakia has over 80 ski areas. Most are small village affairs consisting of one or two surface lifts (T-Bars and Pomas) and a handful of very short slopes. Some of the mid-sized resorts in New England have more skiable acreage than Slovakia's biggest mountains. In fact, only two regions in Slovakia can be defined as true "destination" ski areas for international visitors: Starý Smokovec, Tatranská Lomnica, and Štrbské Pleso in the High Tatras and Jasná in the Low Tatras.

The Vysoké Tatry (High Tatras) are the only genuine alpine mountains in eastern Europe and one of the smallest high mountain ranges in the world. This 260-square-kilometre range looks like a smaller version of the Tetons in Wyoming, with its jagged rock peaks and spruce-covered lower slopes.

At the base of the High Tatras, three medium-sized ski areas connect to one another via an electric tram. Using the efficient shuttle system, one can easily ski one resort in the morning and another in the afternoon. Currently, there is not a common lift ticket for the High Tatras, but one can buy a half-day ticket at most of the resorts for approximately Sk400 (€10). Some areas also offer one-ride tickets for less than €1.

Most ski slopes in the Vysoké Tatry face south and are above 1,000 metres. This makes for sunny, but relatively short runs. The terrain, for the most part, is lower intermediate in difficulty.

Tatranská Lomnica is the best destination in the area for advanced skiers. The resort offers an impressive 1,280m of vertical, but in reality, not all of it is skiable during most winters (the sun often melts the snow on the lower elevations of the area). The best expert terrain is from the top station, Skalnaté pleso (2,180 meters). There are also some interesting off-piste possibilities from this station.

The other two base areas in the region are Štrbské Pleso - Interski and Starý Smokovec. Štrbské consists of one blue (European beginner) trail and a couple of learning slopes. The Predné Solisko trail at Štrbské covers about 500 metres of vertical, but advanced skiers will get bored of it after a few runs. The top stations of Starý Smokovec offer slightly more challenging skiing (red "intermediate" trails in the European rating system), but less vertical - the longest red trail covers only 180 metres of vertical.

The High Tatras are not only a paradise for skiers, but a wonderful venue for summer hikers as well. This year, the High Tatras sold more lift tickets to summer hikers than winter skiers. Many foreigners who have hiked these mountains can attest to their beauty and splendour.

A far better resort for advanced skiers is Jasná in the Low Tatras. Jasná, which includes Chopok Juh, offers steeper terrain, better snow, and generally longer runs than its competitors in the High Tatras. With the same vertical drop as Vail, Colorado (1,000 metres), the resort truly deserves its reputation for being the best in Slovakia. Its pistes include a steep, 2,500-metre-long World Cup racing trail with a vertical of 770 metres. Most slopes at Jasná face north and are tree-lined - two factors that allow them to hold snow longer than most other slopes in the country. However, there are also many acres of above-the-tree-line terrain and south-facing slopes accessible from the Chopok Juh base (a short drive from Brezno).

Jasná has the most ambitious lift development program in all of eastern Europe. For this coming season, Jasná is installing the country's first high-speed, detachable, 6-person bubble canopy chair. This lift, the first of its kind in Slovakia, will whisk people to Záhradky base area up to Rovná ho¾a (1,723 metres) in minutes. For the 2004-5 season, Jasná intends to build an eight-person, high-speed detachable chair on the Chopok Juh side of the resort from the Kosodrevina Hotel to the summit of Mount Chopok (2,024 metres). This new chair will link the two major base areas of Jasná together, and transform Jasná into a world-class ski destination.

In addition to lift upgrades, Jasná recently completed an award-winning four-star hotel, the Tri Studnièky. The four-star Grand Hotel is also relatively new. Some compare it to Austrian four-star accommodations with one important caveat - it is about half the price!

Jasná not only satisfies the advanced intermediate piste skier but also has some incredible backcountry terrain for experts. Alpinists, using crampons and ice axes, can hike from the lift station at Luková (1,680 metres) to Chopok. It is a relatively easy hike in the warmer months, but in the winter, one should not attempt it without a mountain guide and high alpine experience.

From Mount Chopok, one will find a smorgasbord of steep, south-facing, un-groomed back bowls - some of which are serviced by Poma lifts from the Chopok Juh mid-station. Others are uncontrolled for avalanches and require a ridge hike to access. Before making the hike, check on snow conditions at Chopok Juh because these exposed south-facing bowls don't hold snow as well as the tree-lined north-facing slopes of Jasná.

Experts interested solely in the back bowls of Chopok Juh might consider staying there instead of the Jasná base. At the base of the resort is the Hotel Srdieèko, a modest two-star hotel. At the Kosodrevina mid-station (1,515 metres) is a three-star hotel (the Kosodrevina) accessible only by a high-speed, detachable quad.

Finally, true alpine skiers can save a bundle of cash by staying at Chata M. R. Štefánika, a mountain hut run by the Slovak Mountain Rescue Service that sits on a 1,740-metre high mountaintop (Sk200 bed and breakfast - €5). The hut features a canteen serving local specialties and the highest tap beer in Slovakia. Mountain rescue personnel can advise skiers about avalanche dangers. Guide services may also be available through the Chata (see the link below for more details). One snowboarder hiking to Chata Štefánika claimed that it offered the best base for free riding in Slovakia. He spent the entire winter there exploring the endless lines of the Nízke Tatry.

A paradise for
cross-country skiers:

Cross-country skiing is one of the fastest growing winter sports in the world. Since 1998, participation in the sport has nearly doubled.

Arguably, Slovakia, with its abundant national parks and protected woodlands, has some of the finest Nordic skiing in all of central and eastern Europe.

The Kremnica area resorts of Krahule and Skalka host one of the largest Nordic races in the world - the 42-kilometre Biela Stopa race.

The historic town of Kremnica also has a Nordic ski museum in its tourist information office.

Another excellent base for Nordic skiers is Donovaly - a small resort just north of Banská Bystrica. Donovaly offers an excellent ridge run to Nižná Revúca.

Net assessment:
A glass half full!

As a world-class destination for alpine skiers and snowboarders, Slovakia still has a ways to go. More lift upgrades are needed to bring Slovak resorts up to Austrian or Swiss standards. The country's ski areas also need to improve snowmaking. The Carpathians do not get as much natural precipitation as the Alps, but increased their snowmaking could easily compensate for this deficit.

In two years time, Jasná will be a world-class resort with its new lifts and modern hotels. Potentially, the resort could become a Vail in the heart of Europe, but the costs and risks involved in this development are huge. The new Doppelmayer six-pack alone cost the resort $6 million dollars just to install, and the eight-pack will be even more expensive. Only a handful of resorts in the world possess an eight-person chair. However, the rewards for Jasná and Slovakia as a whole could be huge.

Slovakia and the neighbouring countries of Poland, the Czech Republic, and Hungary are slated to enter the European Union (EU) in the spring. Poland, for example, has a burgeoning population of 38 million and only one major ski resort, Zakopane, to satisfy its demand for winter sports. The prosperity that might arise from EU integration for Poland and other countries of the "New Europe" could potentially fuel a huge demand for winter sports, and Jasná, being a short drive from the major population centres of Vienna/Bratislava, Budapest, Krakow, and Prague, stands to benefit handsomely should this prosperity come to fruition. With new Sky Europe flights from major European cities to Bratislava, Jasná could also potentially tap into the lucrative western European ski market - especially for those on a tight budget.

Other Slovak ski resorts, Donovaly and Skipark Ružomberok (originally called Malinné), have some impressive terrain and have recently completed major lift upgrades. The Skipark just added a new gondola, and twelve other mid-sized and small resorts are in the process of lift upgrades, according to the Journal of Slovak Lift Operators. Other resorts such as Vrátna, Martinské Hole, Skalka, and Po¾ana are diamonds in the rough: the terrain is there; all that is required are lift and snowmaking upgrades. As more of the smaller resorts are modernized and regional ticket agreements are made, Slovakia may become an excellent venue for "ski safaris": skiing from one village to the next and then using public transportation to return to home base.

John Sherwood is a columnist for www.dcski.com, an online ski journal that covers the Mid-Atlantic U.S. ski scene. He is married to a Slovak and has made five trips to Slovakia in the past four years. When he's not hiking or skiing, he works as a historian at the U.S. Naval Historical Center in Washington, DC, and is the author of two books, Officers in Flight Suits: The Story of American Air Force Fighter Pilots in Korea (1996) and Fast Movers: Jet Pilots and the Vietnam War (1999).