Will ski mountaineers make it to the Olympics?

SLOVAK ski mountaineers have been enjoying worldwide success for over three decades. The 2002 - 2003 season was no exception. Current Slovak champion Miroslav Leitner won silver at the World Cup and gold in the Austrian Cup. Zuzana Dobošová gained bronze in the European Championships in the High Tatras, and duo Miroslav Leitner and Peter Svätojánsky scored third in the last World Championships in the French town of Serre Chevalier. 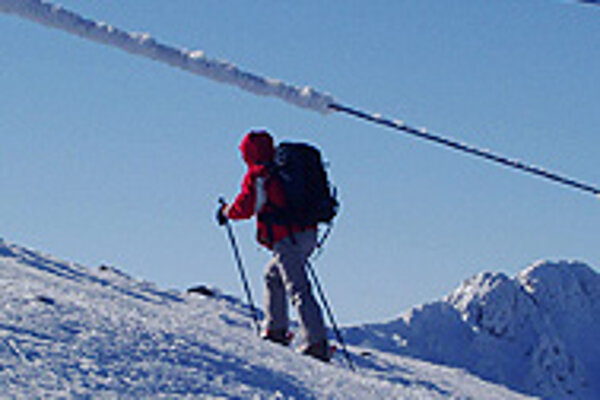 Font size:A-|A+
SLOVAK ski mountaineers have been enjoying worldwide success for over three decades. The 2002 - 2003 season was no exception. Current Slovak champion Miroslav Leitner won silver at the World Cup and gold in the Austrian Cup. Zuzana Dobošová gained bronze in the European Championships in the High Tatras, and duo Miroslav Leitner and Peter Svätojánsky scored third in the last World Championships in the French town of Serre Chevalier.

Though it breeds world-class athletes, this physically demanding sport is struggling for financial support, even when the country's financial minister, Ivan Mikloš, favours the sport himself. The sport is considered a marginal pastime and ignored.

Mikloš, who has devoted himself to it for 15 years, remembers how difficult it was to get the special gear for the sport during communism. "There was neither the money nor the possibility to get it. We had to change into traditional ski boots up on the peaks or in the folds, which wasn't comfortable at all," he told The Slovak Spectator, adding that he bought his first equipment in the early 1990s.

Despite his ministerial duties, Mikloš still finds time to increase his adrenaline level in this way when visiting his friends in the High Tatras, with whom he likes to ski the Malá and Veľká Studená dolina. But while Mikloš does it as his hobby, he still has something in common with professional ski mountaineers: They also have to keep other jobs to earn their living, and often the money needed to practice their sport.

The Slovak Spectator (TSS): The new ski mountaineering season starts December 30 at Štrbské Pleso in the High Tatras. What will this season bring?

Katarína Belicová (KB): There will be the second World Championship of Ski Mountaineering, taking place in Spain from March 2 to 6, 2004. This will be the highlight of the season. Also, for the first time ever, the World Cup will run with one round held [outside of Europe] on a different continent, specifically in the US. Slovak male duo, Leitner and Svätojánsky, will compete in the category of teams as well as singles in all rounds of the World Cup. Concerning female and junior representation, we assume we will nominate our representatives mainly to the championships in Spain.

A novelty of this season will be the Central-European Cup, which we have prepared in cooperation with ski mountaineers from the Czech Republic and Poland. It will give competitors from these countries the chance to measure their skills not only in large international events, but also near the borders of their neighbours. One competition will be held in January in Beskydy, in the Czech Republic. It will be a night contest, which is a new thing for Slovak competitors. We hope that during the opening of the season at Štrbské Pleso, they will have the opportunity to try this out.

TSS: When mentioning the High Tatras' Štrbské Pleso, to what extent are the Tatras suitable for ski mountaineering ?

KB: It is a dream paradise for ski mountaineers. However, the visitor restrictions enable only very limited movement in the mountains [as they are a national park]. This means that organising a competition there is connected with gaining exceptions for each specific event. So, while negotiating with particular ski resorts, it is necessary to cooperate closely with the Tatra National Park administration.

KB: This year [beginning 2003], we got the chance to organise the European Championships for the first time in our country, in the High Tatras. We had been asking for this opportunity for several years. The contest had the highest participation of all competitions organised under the International Council for Ski Mountaineering Competitions (ISMC). The ISMC lauded the competition for its high standard and expressed a hope for future cooperation.

TSS: What did the ski mountaineers who grew up skiing the Austrian or Italian Alps say about the terrain of the Tatras?

KB: I think, concerning the terrain, that we are comparable with Alp or Pyrenees countries, which have been organising ski mountaineering competitions for decades. The question, though, is how our cooperation with the stewards of the national parks will develop - whether we will be able to follow the tough criteria they impose when giving exceptions for contests.

TSS: Slovak ski mountaineers appear in leading places in European as well as world competitions. Is ski mountaineering in Slovakia really at such a high level?

KB: The success of Slovak ski mountaineers started in 1986, when the Filipskí brothers won the very demanding competition in Pierra Menta, France. Up to now, our skiers have enjoyed a significant position among the Alp competitors.

However, if Slovak ski mountaineering doesn't catch the speeding train in western Europe, we might possibly lose the leading places we currently hold. This concerns specifically the duo Leitner and Svätojánsky, who, in the European ratings, occupy the third and fifth places, respectively.

Unfortunately, they are the only team in Slovakia that trains very hard, as financial possibilities are very limited. Despite their great success, their budget has not increased, so they both also have to have regular jobs. As long as such top athletes are forced to keep their jobs to make a living while training, I can see little potential of maintaining the trend.

TSS: Back to the history of ski mountaineering. How did it start and develop when compared with other countries?

KB: In 1977 Stanislav Melek helped to found and held the first presidential position of the ski mountaineering commission within the Slovak mountaineering association JAMES. Since then, our athletes have begun to compete in events and have enjoyed success from the beginning.

At that time, ski mountaineers used more mountaineering technique than they do now. The extreme skiing on tough terrains was much harder than today, when things are moving towards an athletic style.

TSS: Ski mountaineering is also being discussed in connection with the Olympic games...

KB: Yes, it is the desire of everybody active in this field that it gets included in the Olympics.

TSS: For Slovakia this could mean winning medals, right?

KB: It could be possible. But I am afraid that by the time ski mountaineering becomes part of the Olympic games, our representative duo will no longer be at the productive age.

There are many places in Slovakia where one can practice ski mountaineering. Among the most popular are the trails in the High and Low Tatras (around the mountain's highest peak, Chopok), and the Veľká Fatra ridge. Some of the most interesting and non-demanding trails are the ones to Kamenná chata (Chopok area) and Štefánikova chata (Ďumbier area) in the Low Tatras.

A recently issued publication by Stanislav Klaučo documents about 40 ski mountaineering trails across the country, in Slovak. An electronic version and an English translation are being planned. To check weather and avalanche conditions, go to www.hory.sk, also in English. To get a guide, contact Spolok horských vodcov in Starý Smokovec, High Tatras at 052/4422-066. To rent ski mountaineering gear, visit Sport Centrum Gálfy, Starý Smokovec, High Tatras. See also www.skialpinizmus.sk.

Note: Because most mountain areas are protected, be sure to check trail restrictions before skiing.

Marta Ďurianová contributed to this article