Meet Christmas in the streets

FEW could imagine the capital's Main Square today without herds of people and the large happenings regularly held there, like the grandiose New Year's Eve show. But no more than a decade before, the place was empty. It served as an archaeological site, and only in the early 1990s did the reconstruction works that took place there for many years finally stop. 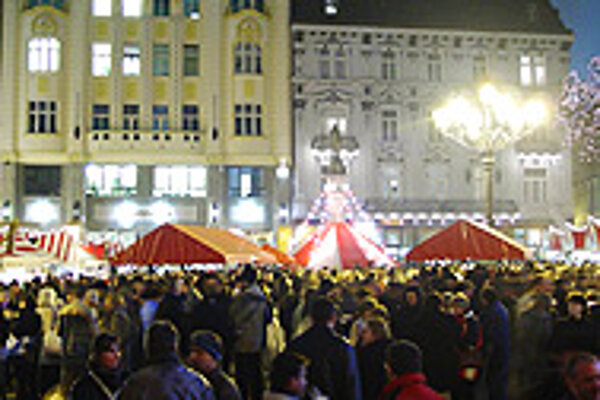 Font size:A-|A+
FEW could imagine the capital's Main Square today without herds of people and the large happenings regularly held there, like the grandiose New Year's Eve show. But no more than a decade before, the place was empty. It served as an archaeological site, and only in the early 1990s did the reconstruction works that took place there for many years finally stop. It was around that time that the town officials started thinking of the square's historically important role as the city's main meeting point. They put their heads together and searched for ways to best use the square. In the winter of 1993, they organised one of the first "people meeting" events there - the Christmas market.

"The idea originated in the minds of former mayor Peter Kresánek and current deputy mayor Štefan Holčík. They were inspired by Christmas markets in some of the European cities they visited, such as Nuremberg in Germany, Strasbourg in France, and Brussels in Belgium. Two of their ideas were that the market booths be designed in the colours of the town - red and white - and that they not offer commercial consumer goods, such as electronics or perfume," said Milan Vajda, the Bratislava mayor's spokesman.

At that time the market had 50 booths, half of what it has today. This winter, the market's 90 booths extend up into Františkánske Square. The number of people interested in running a booth increases every year, as does the number of visitors.

"Looking at the numbers, there is no doubt about the popularity of the event," Vajda said.

A similar goal of bringing people together and the increasing trend in popularity can be observed behind the organisation of Christmas markets in other towns around the country. The eastern town of Košice, as well as the western town of Trnava, regularly add new booths and renew old ones. But while the second largest city in Slovakia, Košice, has 40 booths lining along Main Street this year, Trnava scores far higher with 52.

The typical assortment offered at the markets ranges from Christmas decorations, CDs, postcards, various artworks, to other things that should not be missing at the Christmas table. And while listening to the live performances that often accompany such events, one can sip from the varené víno (mulled wine), medovina (heated honey mead), or punč (punch), as well as taste bits of specialties typical of the region, such as sausages, savoury pancakes (lokše), Gypsy livers (cigánske pečienky) in sandwiches, doughnuts, and various kinds of cake.

Huge Christmas trees traditionally dominate the markets, and individually the towns prepare additional lures for visitors. Children in Trnava will perform a live nativity scene at the town's Trojičné Square from December 17 to 19 and some of the booths there will bake fish. Bratislava has a large wooden nativity scene erected in the Town Hall's courtyard, and the market organisers came up with two novelties: a taste of roasted pig and sushi cuisine.

"The sushi bar is just an attempt to see whether [something different] can work or not. We will see. Obviously, it doesn't fit into the character of central-European gastronomy," Vajda said. According to him, the markets are "certainly the most attractive place for Bratislava citizens to meet with their friends over the four Advent weeks, especially on the weekends. For people working in the centre, they have become a public cafeteria during Christmas time, where they like going for lunch, and forgetting about their healthy diets, as the food there is rather heavy."

Foreign visitors to the town, primarily Austrians, find the booths attractive thanks mainly to their wide gastronomic character. "On the Rathausplatz in Vienna, they have a huge, quality Christmas market, but the gastronomic choice is very limited," Vajda said.

"Bratislava's market is maybe a fourth of the size of the one at Rathausplatz, but it is its almost family atmosphere that drags them here."