SHE WAS eight months pregnant when she performed at the renowned Bratislava Music Festival in the autumn of 2002. This summer, perfectly fit eight months after giving birth to her third child, she astounded the audience at the prestigious Salzburg festival. And most recently, on November 18, her clear soprano tone filled one of the world's most famous musical stages - Carnegie Hall in New York. 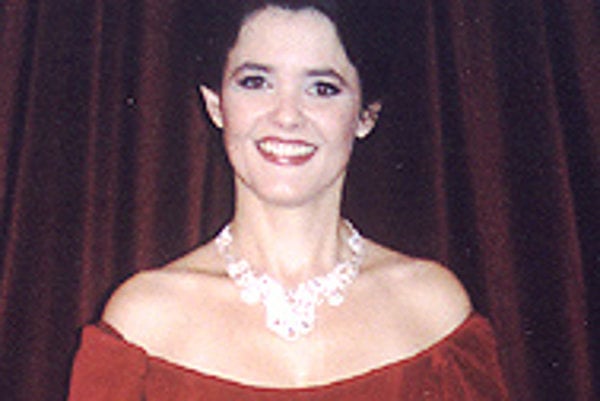 Font size:A-|A+0
SHE WAS eight months pregnant when she performed at the renowned Bratislava Music Festival in the autumn of 2002. This summer, perfectly fit eight months after giving birth to her third child, she astounded the audience at the prestigious Salzburg festival. And most recently, on November 18, her clear soprano tone filled one of the world's most famous musical stages - Carnegie Hall in New York.

An ambassador of Slovakia's opera scene to the world, coloratura soprano Ľubica Vargicová has been selected as Person of the Year by the staff of The Slovak Spectator for bringing this small central European country closer to the Western art-loving world through her music.

At 35, Vargicová, the soloist of the Opera of the Slovak National Theatre (SND), has performed on leading European opera stages and with world-renowned opera soloists, such as Italian bass-baritone Ruggiero Raimondi, Austrian mezzo-soprano Angelika Kirschlager, and American tenor Neil Shicoff. She has portrayed over a dozen of the main characters from the works of classical and romantic composers, including her favourites, Verdi's Gilda, Donnizzeti's Lucia, and Bellini's Amina in La Sonnambula. She has also been the highlight of several international festivals.

Despite her highly successful career, the mother of three has adopted none of the mannerisms of a star. Approachable and open, with a good sense of humour, Vargicová considers herself nothing more than an ordinary, though lucky, person with a positive approach to life.

"I feel like the child of fortune," she said. Knowing that her family has a non-musical background, she never dreamed of becoming an opera singer, and she tried to enter a conservatory just out of curiosity, this is easy to believe.

The high-profile performer, though, has always loved singing, and as a child she sang everywhere she went. Thanks to her thin, high voice she was nicknamed "Whistle".

As a young student, Vargicová started taking piano lessons together with her sister. Surviving the "torture" longer than her sibling, her relationship to music gradually formed. During elementary school she joined the school's choir.

When she finished her studies at the Bratislava Music Conservatory, her teacher, Kristína Figurová, advised her to study in the class of Vlasta Hudecová at the city's Academy of Music and Drama Arts. However, Hudecová sent her away for lack of spaces, and Vargicová decided to patiently wait until one opened for her.

Meanwhile, she applied for independent study at the Slovak Music Fund, and the SND offered her five small roles. She made her stage debut there in 1987 as Erster Knabe in The Magic Flute by Mozart.

She continued performing the five roles at the SND, even after she was finally accepted into Hudecová's class in 1989. In the first grade of the academy, she gave birth to her first child.

Vargicová does not train her voice daily, as it needs time to recuperate. With three children around, though, this is often impossible. "Sometimes we end up whispering or writing messages... Of course, when I was younger, I used to shout at them, but I don't do that any more," she said with a laugh.

The singer gives around four opera performances a month, with more and more being staged abroad every year. On one hand it pleases her, while on the other she regrets spending less time with her fans in Bratislava. When it is possible, she takes all her children (Lukáš, 13; Margaréta, 8; and Jakub, 1) with her. When it is not, she travels with only her husband. And then they both cannot wait to be reunited with their little ones, who are watched over by their grandparents.

"I had to learn to make compromises between my family and my work, and I manage," she said.

The Slovak Spectator talked to Vargicová about her recent performance at the Weill Recital Hall in the Carnegie Hall, her role as a representative of Slovak culture, and her experiences abroad and at home.

The Slovak Spectator (TSS): Artists can often do more for the positive image of their nation than politicians and diplomats can. Do you feel like an ambassador of your nation or that you deliver a deeper message when performing?

In a foreign country, even when we have great success, we remain outsiders who have to prove what they know. I have never really considered leaving Slovakia and trying to set down roots in a foreign land. I decided at the beginning of my career that Slovakia would remain my homeland.

TSS: You just recently performed with such a "mission" at Carnegie Hall, where you were certainly a success. How did you handle the performance?

ĽV: I was a little bit distracted and nervous. However, I tried not to think too much about where I was standing and for whom I was performing. Being fully aware of the weight of the performance would have made me more nervous. However, I always try to do my best regardless of where I am singing, be it Bratislava or Carnegie Hall. On the other hand, you cannot completely suppress your awareness of the place and in certain moments it dawned on me that I was actually there, singing at Carnegie.

Subjectively, for my inner world, I did not perform in the way I wanted to. However, the audience did not notice. I am very self-critical and never fully happy with my own performance. But I think the audience liked it.

TSS: Have you noticed any difference between the Slovak and American audiences?

ĽV: Not really. I knew that many Slovak expats were there and I was aware that people did not come there to criticize me. They were regular people who were enthusiastic about me coming there. I did not see them as a specific American audience. I wanted to offer them my best.

TSS: Singing in Carnegie Hall must be similar to what climbing Mount Everest is for athletes. Do you have any other ambitions or professional dreams that you hope to fulfil?

ĽV:I am happy with what I have achieved. I do not deny that I would take new chances if they come, but I am not building castles out of clouds anymore. I live in the here and now and I am happy.

ĽV: Yes, I hope that by being Slovak, my performances can increase that self-confidence. But, I also fight with this lack of confidence. It is also my problem. When I am on the stage, it disappears and each song gets better and better. I have never stepped on stage feeling that I am perfect and that I have nothing to fear.

TSS: How is Slovakia perceived abroad? Currently, Slovakia has often been praised in the world media for its economic potential.

ĽV: Sometimes I feel that only very few people know where Slovakia is. But then, I also see that people are starting to know who Edita Gruberová, Lucia Popp, or Peter Dvorský are and where they come from. Our excellent singers and the Slovak musical school are well known abroad.

TSS: Currently, many people struggle with social hardships. Does this tendency have an impact on their ability to enjoy art and music?

ĽV: Yes, you can feel some impact. However, I can also feel a change in the music as it becomes even more commercial. This is the time of musicals and lighter genres. Classical music is just not in right now and this is why I deeply appreciate it when people come to hear my performances.

TSS: To what extent is the main Slovak opera stage, the Opera of the SND, comparable with the top European opera stages?

ĽV: Comparable... well, it's ours. It has many problems - I shouldn't even say it - but it's our opera and I love it. It's a classical theatre and I would be unhappy if I had to go to a modern theatre. There are many modern theatres around the world with great acoustics, but they do not breathe with history. And that's what I like. I am a romantic type.

TSS: People and critics often compare you with the famous coloratura singer Edita Gruberová. Some even consider you to be her successor. What is she to you?

ĽV: I admire her as a singer a lot. She helps to spread the good word about us, and helps our singers get established abroad. Those who know she is from Slovakia can see that the [opera] school here is good.

I have been fortunate to be compared with her; it is a big compliment for me, though I don't know what it means to Ms Gruberová (laughs). I would very much wish to achieve what she has. She is the absolute top in coloratura singing.

Performances to the end of the year

The day after this interview, December 16, Vargicová travelled to perform in the southern Slovak town of Nitra. With one day of rest, she appeared as Lucia in Donizetti's Lucia di Lammermoor on the SND's stage, and on December 21 she is scheduled to sing at the Slovak Radio with tenor Peter Dvorský. Shortly before the end of 2003, on December 29, she will put on the dress of Violetta to sing the part from Verdi's La Traviata.