IN A SUPRISINGLY easy vote, chief military prosecutor Dobroslav Trnka was elected in a December 12 parliamentary secret ballot to lead the nation's prosecutors as the new attorney general for a seven-year term.
Trnka, a 40-year old army professional, will be the country's fifth attorney general since the fall of communism in 1989. He will also be the first to lead the office when Slovakia becomes a new EU member in May 2004. 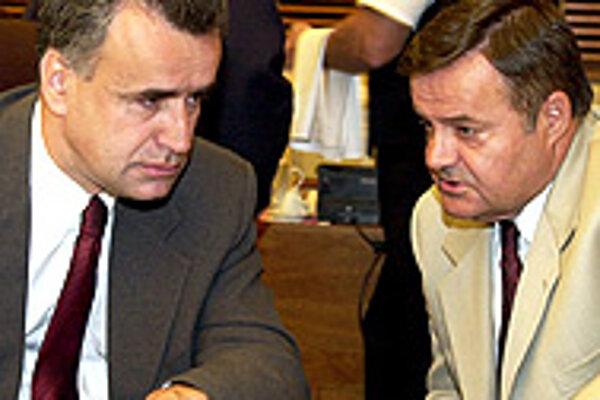 Font size:A-|A+0
IN A SUPRISINGLY easy vote, chief military prosecutor Dobroslav Trnka was elected in a December 12 parliamentary secret ballot to lead the nation's prosecutors as the new attorney general for a seven-year term.

Trnka, a 40-year old army professional, will be the country's fifth attorney general since the fall of communism in 1989. He will also be the first to lead the office when Slovakia becomes a new EU member in May 2004.

"I consider the election to be the peak of my professional career," Trnka said to The Slovak Spectator on December 15. Apart from leading the military prosecutor's office, Trnka is also the current deputy chief of the attorney general's office.

He would not, however, give any details regarding his plans for the chief prosecutor's office, pledging to present them to the media when he is officially named to the post.

President Rudolf Schuster will soon appoint Trnka to the post, as he is not expected to raise any complications or objections.

Schuster's spokesman, Ján Füle, said to The Slovak Spectator on December 15 that the president was pleased to see that the parliamentary vote went so smoothly.

"The president is especially happy that the attorney general's office will have a new boss because for quite some time [prior to the vote], it did not seem that it would go through so easily," Füle said.

Trnka was one of three candidates nominated for the post, and in the moments leading up to the vote, it was uncertain whether the chamber would gather enough support for one of the candidates. But shortly before the vote, MP Jirko Malchárek withdrew his candidate, Vojtech Ernest, thus increasing the chances for Trnka, who was seen as the stronger of the two remaining candidates.

In the secret ballot, which had to be repeated due to a technical confusion in the first vote, Trnka received 84 votes leaving behind his rival, chief special prosecutor Ján Bernát, who got 58 votes.

Trnka was pleased that he was supported by so many members of the 150-strong parliamentary chamber, "which means that some opposition MPs supported me as well", he said to journalists shortly after his election.

The self-described "temperately active sportsman", who in his spare time enjoys sports-fishing, tourism, and bicycling, said that he was neither extremely nervous nor exhilarated to take the post. "I take it professionally," he said.

"It is a major challenge to do it for seven years and I want to do it well," Trnka said.

"After that I can retire and spend my time gardening," he added with a laugh.

Trnka, a native of the western Slovak town of Skalica, finished law studies in the late 1980s and soon after, at the turn of the decade, was involved in the investigation of several events surrounding the fall of communism in the former Czechoslovakia in November 1989.

More recently, Trnka became known to the public as the head of a team of military prosecutors investigating the scandal surrounding illegal wiretapping at the Slovak Intelligence Service (SIS).

Trnka, among a number of other prosecutors, recently objected to Justice Minister Daniel Lipšic's plans to change the rules governing the operation of prosecutors and the attorney general's office.

Amendments to the existing legislation on the attorney general's office and on prosecutors are expected to increase the rights of the Justice Ministry towards prosecutors.

If the changes were approved, the Justice Ministry would, for example, be entitled to issue binding guidelines that would unify the exercise of justice in cases that are similar to one another. Currently, the unification of procedures is in the hands of the attorney general.

Based on the changes, as of May 1 next year, the Justice Ministry would also be entitled to demand that the attorney general launch proceedings in specific cases on public interest grounds. If the attorney general were to oppose, he would have to explain his position in written form.

Trnka, however, would not comment on how he expected the dispute with Lipšic over the planned amendments to develop.

Ivan Šimko, an independent MP who proposed that Trnka run for the post, was happy with the candidate's election, stating that, above all, Trnka was "[politically] independent and a fine prosecutor".

Trnka's current boss, Attorney General Milan Hanzel, said shortly after the vote that he was convinced Trnka "will represent Slovakia very well as attorney general" and he wished Trnka a quiet term uninterrupted by attempts to remove him from the post.

In the meantime, Trnka said he is preparing to "change my life, reorganize my time, and most likely spend much less time with my family and on my sports hobbies".