THE RULING Slovak Democratic and Christian Union (SDKÚ) has plummeted in popular support over the last three months, with one poll even marking a historic low of 4.1 percent for what was once the strongest ruling party.
The SDKÚ's plunge comes much to the joy of the opposition leaders, who are calling for early elections in the central European country. 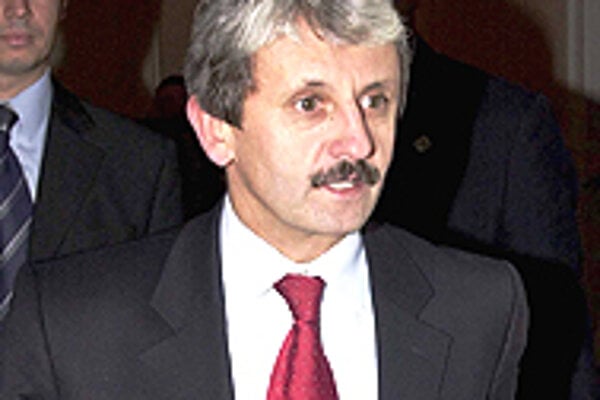 Font size:A-|A+
THE RULING Slovak Democratic and Christian Union (SDKÚ) has plummeted in popular support over the last three months, with one poll even marking a historic low of 4.1 percent for what was once the strongest ruling party.

The SDKÚ's plunge comes much to the joy of the opposition leaders, who are calling for early elections in the central European country.

Surveys by two polling agencies suggest that the strongest ruling party in the elections in 2002 would now fail to meet the required five percent quorum to make it to parliament.

Although other December surveys showed the PM's party receiving a higher level of support - 8.7 percent in a poll by the Statistics Office, and even 10.3 percent in a Markant agency poll - political analysts have warned the ruling party to take the numbers seriously.

SDKÚ representatives have in general downplayed the latest figures. While Milan Hort, the head of the party caucus in parliament, said he did not find them alarming, MP Roman Vavrík questioned whether the poll results reflect the real situation - referring to other polls that show the SDKÚ in better position.

SDKÚ MP Peter Miššík even said to the Pravda daily on December 16 that the party is currently in a "transition period" that results from the SDKÚ being associated with ongoing yet widely unpopular reforms.

"The reforms, which the public perceives negatively, have the biggest influence on the loss," Miššík said.

However, political analysts have discredited that argument by noting that SDKÚ voters - largely university educated, urban, and pro-Western - actually welcomed the reforms.

Michal Vašečka, political analyst from the Institute for Public Affairs (IVO) think tank in Bratislava, said: "Not only do SDKÚ voters expect the reforms to be carried out, but the argument that the low support is a cost of the reforms does not correspond with the situation a few months ago - when reforms were being implemented, yet the SDKÚ was popular with 13 to 14 percent."

Other analysts have agreed with Vašečka, who argued that the SDKÚ's steep fall has been caused by the recent turmoil within the party and on the national political scene. In August, PM Dzurinda for the first time publicly spoke of his suspicion that a certain group existed in Slovakia that was working against the interests of the state, intelligence service SIS, and the SDKÚ.

Another conflict linked to the group case came when Dzurinda fired Defence Minister Ivan Šimko, who refused to support the recall of head of the National Security Office Ján Mojžiš. Mojžiš was recalled a few weeks later. Dzurinda never properly explained his reasons for expelling Mojžiš, but information recently leaked to the press suggest that he considered Mojžiš to be the biggest aide of the possible leader of the group - businessman Miloš Žiak.

Further weakening of the SDKÚ came just weeks ago when a group of seven MPs, including Šimko, left the party caucus. They are now planning to form their own party to be called the Free Forum. In the MVK survey the Free Forum got 3.9 percent support.

The authoritative manner that Dzurinda showed in the case of Šimko and Mojžiš have, according to analysts, sent a bad signal to the SDKÚ's voters who, according to Vašečka, are liberal in thinking and like the SDKÚ because of its previously consistent democratic image.

Ľudmila Navrátilová from the Free Forum agreed that the SDKÚ's loss in support was a "result of the scandals" of the previous few months.

Opposition parties, meanwhile, are preparing for a referendum on early elections initiated by the Confederation of Trade Unions (KOZ) with a petition in which 441,794 signatures from citizens have been collected in support of the popular vote.

In a formal procedure, the president has to confirm the validity of at least 350,000 signatures and then call a referendum on early elections that must take place within 90 days of that announcement.

The most popular opposition party, Smer, led by the ambitious Robert Fico, scores about 26 percent of voter support in polls, and the leader remains by far the country's most trusted politician. Smer also helped the KOZ collect the signatures.

Despite the high number of signatures, however, the success of the likely referendum remains unclear because, according to Slovak law, more than 50 percent of voters must participate for the popular vote to be valid.

Vašečka, as well as sociologist Ivan Dianiška from the Focus agency, doubted that the turnover will be this high. In Slovakia's 11-year history only one referendum has ever reached the required turnout - the referendum on the country's entry into the EU.

Moreover, Slovak lawyers disagree over whether the result of the referendum is actually binding for MPs, two thirds of whom - that is 90 out of 150 - would need to approve a law shortening the current election term to organize the early elections.

SDKÚ down but not out

The SDKÚ's falling popularity may be pleasing for the opposition and the unions, whose goal is bringing the Dzurinda cabinet down, but analysts say the PM's party is definitely not out of the game.

"The SDKÚ has already once risen from the dead, although at that time the [popular] support was not so alarmingly low," Dianiška said, referring to the situation in the SDKÚ before the 2002 parliamentary elections - when the party had seven to nine percent support in various polls but managed to get 15 in the elections.

According to Dianiška, much depends on what happens with the Free Forum of Šimko, who so far has failed to present a clear program or political goals, and also on how the PM reacts to the current support crisis.

"The SDKÚ definitely is not out of the game," added Vašečka.

"If they manage to convince the voters that they are going back to the original style, their support could grow. Even in the theoretical early elections, the SDKÚ would certainly have to be dealt with. Many of their voters, though now disappointed with the style of SDKÚ leadership, would probably grit their teeth and vote for the party again."

But how long the SDKÚ can afford to push its voters into compromising their own ideals remains unclear.