Radošinci rejoice with work, as usual

RADOŠINSKÉ naivné divadlo (RND) was born the same day as Jesus: December 25. Stanislav Štepka, a local university student of Radošina, a small town near Piešťany, founded it forty years go, offering his own way of "looking at the world". His original humorous look, intertwined with songs, has rapidly grown in popularity and citizens have started to consider the RND "their national theatre". 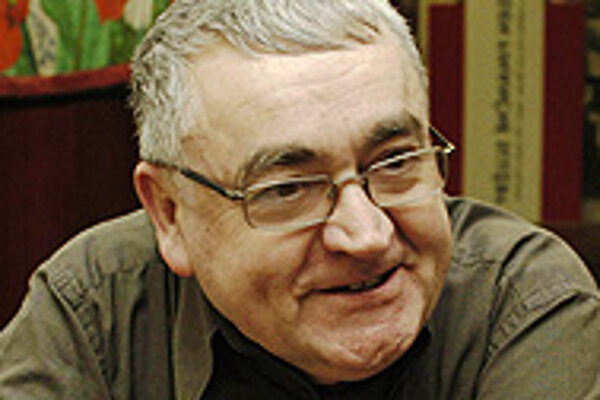 Font size:A-|A+
RADOŠINSKÉ naivné divadlo (RND) was born the same day as Jesus: December 25. Stanislav Štepka, a local university student of Radošina, a small town near Piešťany, founded it forty years go, offering his own way of "looking at the world". His original humorous look, intertwined with songs, has rapidly grown in popularity and citizens have started to consider the RND "their national theatre".

Today the theatre's popularity reaches far beyond the country's borders. Its 6,200 performances - each sold out, some of them even years ahead - have been seen by two million viewers at home and abroad, including the Czech Republic, Italy, Austria, Germany, Hungary, the USA, and Canada.

Just last weekend the theatre celebrated the 40th anniversary of its founding in the town of its origin - Radošina, from which it had to move to Bratislava for political reasons - and soon it will be preparing to celebrate two important birthdays next year: the 60th birthday of director Štepka, and the 65th birthday of the theatre's primary musician and composer, Ján Melkovič.

"We will celebrate everything with work, as usual," said Štepka, the head, arms, and legs of the theatre that never stops working. As an actor, he has not missed any of the theatre's 6,200 performances. Having 28 performances a month, he says it is like any other job people do. "They just don't count the days [they go to work]."

Though encountering a heavy snowstorm on his 120-kilometre route from Radošina and thus arriving late to the Bratislava premiere on December 15 of his 41st play, dedicated to the theatre's 40th anniversary, the director still found time to talk to journalists, pose for a photographer - meanwhile occasionally slipping away to rehearse a song or a line from the text - and even to accept a huge basket of goodies from his colleagues with congratulations on the occasion.

"And let your pen never run dry," a member of the well-wishers finished the congratulations with a suggestive wink and nod to the audience, showing the typical humour of the Radošinci, as they are familiarly called. The oldest actress of the theatre, Katarína Kolníková, branded Štepka with a big kiss, and the theatre's manager pointed to two mushroom-shaped piggy banks arranged at the top of the basket load: "In this one we will save money for [going to] America and in this one for Canada."

On the occasion of celebrating their anniversary in Radošina, Štepka introduced the first volume of his book Chronicle of a Comic. The book captures the history of the theatre and the events that led him to write the first five plays. He also talked about his comedy-play Hostinec Grand (Grand Inn), currently being issued on CD, and the DVD release of an hour-long documentary on the theatre's 40-year history filmed by Štepka's son Juraj. For non-Slovaks, they are preparing a large English-language overview of their work on the theatre's website (www.rnd.sk).

When Štepka founded the RND in 1963, or "maybe the theatre founded us" as he likes to put it, he could barely imagine the success the theatre would enjoy. "We were happy they [the audience] didn't beat us up at that time," he recalled with a laugh.

"We really wanted to do something different. You know - it's that desire of young people to do something that 'for heaven's sake is anything but traditional theatre'. At that time, the small or short stage forms that started in the Czech Semafor theatre [Jiří Suchý and Jiří Šlitr] were very popular and in Slovakia were performed by Milan Lasica and Julo Satinský. We also wanted something like this.

"However, our choice of place and time was not fortunate. We came up with a play on Christmas, pushing away a local amateur theatre that had always performed a Christmas play there at that time, offering the audience our own ideas. But the people were not much interested in them, and we became offended that they didn't understand our thoughts... But the problem was that we didn't understand them," Štepka confessed.

The failure sharpened his interest in theatre, making him increase his visits and readings at other theatres. His next play, Pitva (Autopsy), written three years later, has had 101 reprises by now.

Štepka remembers the first seven years of the theatre to be the most "beautiful". During that time they were trying to find their audience as well as themselves.

"Our audience is the basis of our success, as well as our thinking. We have never tried to do theatre just to show off, to show how theatrically skilled we are and what tricks we can play on our viewers, so that they would have to think about them for a long time. We have always approached our viewer with respect and thought of the theatre in terms of a good restaurant - where one can find a good menu, perfect waiters, not even mentioning the chef, and where people like to return, even for the same meal they had last time," Štepka said.

The founder, playwright, director, actor, singer, and lyricist Štepka originally named the theatre the Slovak Naive Theatre. The political authorities of the time, though, objected to the title. "Everybody called us Radošinci anyway, so we changed the title," says Štepka.

The word "naive" in the name implies the childish perspective, the naive eyes through which the theatre sees the world. Today there is nothing more behind it, but in the past, during heavy communist censorship, the naive look often also served as a cover for deeper issues that satirized social and political themes.

For example, the authorities suppressed the official legal release of the RND's most popular play, Jááánošííík, which mocked the nation's folk hero Juraj Jánošík (comparable to the English outlaw Robin Hood) for nine years, as the play reversed the overblown communist practice of making a hero out of an ordinary working man - it made the hero an ordinary man.

The world of Štepka, which he portrays and tries to preserve in his plays, is "a world in which they need postmen," he said. "A world where, thank god, no emails exist yet, where people do not communicate electronically. Where a postman still comes to a house. The postman always brings that little hope that he will deliver something - well, he delivers many other things too - but there is that hope that he will bring a nice postcard, a letter from somebody, and smile nicely.

"We have always tried to be such postmen, even those which dogs sometimes bark at. But I feel that we have always brought good news rather than bad," said Štepka.

This December 25 he plans to stay at home, "listening to silence".