Royal crown counts down the year

TO CELEBRATE the coming of the new year in Bratislava's historical centre has become a tradition that lures tens of thousands visitors to the capital every year. And each time around, the organisers try to perfect the festivities a bit more.
"We aspire to make the welcoming of the new year in Bratislava the central celebration in Slovakia, also visited by tourists from abroad," the city's mayor, Andrej Ďurkovský said. 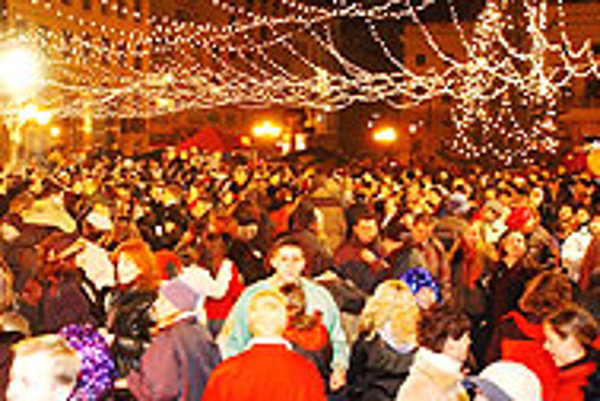 Font size:A-|A+
TO CELEBRATE the coming of the new year in Bratislava's historical centre has become a tradition that lures tens of thousands visitors to the capital every year. And each time around, the organisers try to perfect the festivities a bit more.

"We aspire to make the welcoming of the new year in Bratislava the central celebration in Slovakia, also visited by tourists from abroad," the city's mayor, Andrej Ďurkovský said.

Similarly to the previous four years, the celebration programme will be centred on the Main Square under the historical Old Town Hall. Other shows will be spread across Hviezdoslavovo Square and along Michalská Street. This year, though, brings the novelty of a countdown of the last seconds of the old year.

"Just as New York has its [New Year's Eve] ball that descends the flagpole atop Times Square, and Sydney has its midnight firework display over the harbour, Bratislava will have its royal crown," said Milan Vajda, the mayor's spokesman.

A copy of the royal crown from St Martin's Cathedral, a large illuminated object three metres in diameter, will gradually ascend the space in front of the Old Town Hall on the Main Square up to a height of 10 metres. With the beat of the last second of the old year it will stop and stand glowing above the heads of the celebrating crowd until the end of the party.

"We would like to return to Bratislava's traditional role as a coronation city. By crowning the incoming year of 2004, Bratislava citizens will also crown their city a metropolis of a new country in the European Union," said Vajda.

As is the tradition, shortly after midnight the focus of the celebrating people will turn to the Castle hill, above which fireworks will be displayed.

Visitors can keep warm during the hours waiting for the midnight countdown and fireworks by dancing to numerous music performances spread around the city's historic core, starting at 15:00 on Hviezdoslavovo Square. Two and a half hours later, a mega show breaks out on the Main Square with nine bands playing through midnight. At 20:00, dance-restless visitors should move to Michalská to join a laser disco party winding through the street.

"The main programme on the Main Square is directed towards happy, energy-loaded performances. The names of some bands might not ring a bell, but the show they can put on is terrific," said Pavol Murín, the programme manager.

He singled out the Slovak band Captain Slice, a "flower power" revival full of colourful costumes and wigs starting at 18:15, and the Czech Rock'n'Roll Band of Marcel Woodman, a twelve-member locomotive of catchy rhythms and daisy entertainment that will arrive on stage an hour before midnight. The repertoire of both bands contains classic hits in several languages as well as original arrangements.

Not only the bands, but also the masters of ceremony at the Main Square promise to speak a language other than their mother tongue. "If there is demand, it's not a problem to talk in English," said Miňo, who will accompany the show together with Olga Záblacká.

New Year's Eve, or Silvester as it is called in Slovak, has been annually organised under the title "We Enjoy Being Bratislavans". But the other novelty of this year was not only designed for Bratislava citizens.

A large cylinder box will stand in the centre of the celebrations, into which visitors can throw letters with their personal wishes for 2004. The Bratislava mayor will then read the wishes and those having something to do with the capital will serve him as ideas for his work.

"It could become a nice tradition that next year at the New Year's Eve celebration 'the fathers of the town' could tell the authors of the wishes that what they asked a year ago has become reality," the mayor said.