PRESIDENT Rudolf Schuster appears determined to keep up his fight for a stronger role for the head of state in Slovak society. Although Schuster has yet to say his final word on whether he will run for president again, critics say he is already setting the stage for his re-election bid in 2004. 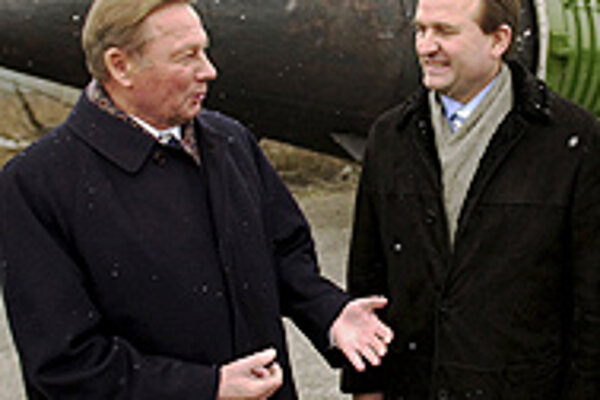 Font size:A-|A+0
PRESIDENT Rudolf Schuster appears determined to keep up his fight for a stronger role for the head of state in Slovak society. Although Schuster has yet to say his final word on whether he will run for president again, critics say he is already setting the stage for his re-election bid in 2004.

In his New Year's address, Schuster pointed out that Slovakia needs an independent president.

"Even though the presidential powers aren't extensive, the role of the head of state is irreplaceable in a parliamentary democracy," said Schuster.

"In Slovakia, the rule of political parties is strengthening more and more and it restrains civic activities. Your vote will decide whether the trend of the growing power of parties will be maintained, or whether it will find a counterbalance in the head of state," Schuster told Slovak citizens in connection with the upcoming presidential elections.

Speaker of Parliament Pavol Hrušovský has announced that the first round of elections is to be held on April 3. If none of the candidates gains more than 50 percent of all cast votes, the top two contestants will meet in a second round two weeks later.

Foreign Minister Eduard Kukan, member of the ruling Slovak Democratic and Christian Union (SDKÚ), currently leads the polls. According to the Focus agency, as many as 21.9 percent of voters favour Kukan for the post.

Leader of the opposition Movement for a Democratic Slovakia (HZDS) party and former PM Vladimír Mečiar, who has yet to confirm his candidacy, is in second place with 19 percent. He is followed by Ivan Gašparovič, former deputy speaker of parliament and current boss of the non-parliamentary Movement for Democracy, formed by former HZDS members. Gašparovič is backed by a bloc of nationalist parties and the parliamentary People's Union - also a party made up of HZDS renegades.

In the Focus poll, Schuster received the support of just over one tenth of voters, putting him in fourth position. The second best-ranking candidate without party support is Martin Bútora, Slovakia's former ambassador to the US, with 8.5 percent.

Schuster, who was the boss of the now-dissolved Party of Civic Understanding, a former ruling party, before running in the first direct presidential elections in 1999 with the support of all ruling coalition parties, is waiting to make a final decision on whether to run for a second five-year term.

"I have not yet made up my mind," Schuster told the SITA newswire.

Not much time remains - would-be contestants have to announce their candidacy by the end of January.

In recent months Schuster has exercised the few powers he does have to a very great extent. Primarily, he has often used his right to block legislation passed by parliament. Laws approved by the legislation have to be signed by the president. In the event that he declines to do so, the parliament has to discuss the legislation again. Whereas only a simple majority of voting MPs is required to pass laws the first time, an absolute majority of the entire 150 member assembly is needed to pass laws returned by the president.

In recent weeks the president has returned to parliament legislation setting ground for a new pension system, enabling the privatisation of remaining state property, and bringing tax reform, all much hailed by Western experts.

Representatives of the ruling coalition, which has lost its majority in the legislature and has to put significant effort into ensuring the required support before each new vote, have been critical of Schuster's vetoes.

"We have gotten used to the fact that the president, in my opinion, does not fully respect the constitutional division of powers," said PM Mikuláš Dzurinda in early December, after Schuster returned yet another set of laws.

Dzurinda suggests that the president is trying to break tradition and take a more active part in the law-making process. The ruling coalition has nonetheless found the strength to approve all key reforms a second time. By opposing these reforms, most of which will have some negative social impacts, Schuster is aiming to gain points with voters ahead of next years' elections, say critics. Schuster himself denies such claims.

"When I return laws I'm accused of doing it for political purposes, as part of my presidential campaign, which I have not even announced and, I can tell you with a clear conscience, that I have not even decided on yet," he said in the state of the country address in December 2003.

Perhaps more worrying than troubles during the legislative process for the coalition is the planned referendum on early elections. The labour unions, supported by the opposition parties Smer and the Communist Party of Slovakia started a petition in mid November 2003 asking for such a referendum to be called and it took them just over a month to collect more than the statutory limit of 350,000 signatures.

Even after this number is reached, before calling a referendum the president still has the right to consult with the Constitutional Court on the legality of the question being asked in this possible referendum, which some experts have put in doubt, arguing that the length of the election term is set by the country's fundamental law.

President Schuster has announced he does not plan to turn to the Constitutional Court on this issue. The results of this kind of popular vote are not binding for the parliament, but politicians across the political spectrum agree that if a referendum is valid and approves early elections, MPs will have to listen to the will of the people. With results of any such referendum uncertain, the ruling coalition will want to make sure that less than the 50 percent of voters required by the constitution attend it, in which case the results would be void.

"I will ask the people to ignore the referendum," said PM Dzurinda to the TA3 news channel.

That tactic has worked well in the past. Out of the four referenda held throughout Slovakia's 11-year history only one was successful - last year's vote on EU entry, which attracted just over 50 percent of citizens. All other referenda failed due to low voter turnout.

However, Schuster now says he is considering calling the referendum on the same day as the first round of presidential elections.

"I don't see it as a problem, but I have not decided yet," said Schuster for the SITA news wire. The president feels tying the two would save money.

This leads some insiders to conclude that Schuster is intentionally helping the opposition, which hopes the popular vote will succeed.

"The president's plan is clear evidence that Schuster is not non-partisan and that he wishes for a change of the current coalition," said Béla Bugár, deputy speaker of parliament and head of the ruling Hungarian Coalition Party.

Early elections would most help Smer. According to a survey done by the Statistics Office released on December 15, 2003, Smer is currently supported by over 30 percent of Slovaks. The opposition party received only 13.5 percent of the vote in the 2002 parliamentary elections. Smer is followed by HZDS, which has around 18 percent of the voters behind it.

In return for helping Smer come to power, say some media reports, Schuster can hope for what he now criticizes - party support in this year's presidential elections. Smer representatives have said repeatedly that they will not put forward their own candidate and have declined to comment on supporting Schuster.

"Presidential elections are fairly low on the list of our priorities," said Smer boss Robert Fico.