DURING 2003 the ruling coalition managed to pass numerous laws that are likely to shape the country's future for years to come, despite the politically turbulent times the four cabinet parties continue to face.
In the sphere of legislation, the ruling parties remained strong enough to push through dozens of laws that were applauded by analysts who hope they will reform many areas, including education, taxes, and retirement, in this post-communist country. 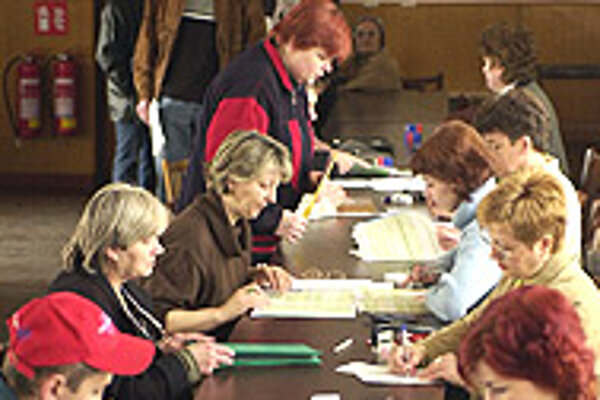 Font size:A-|A+0
DURING 2003 the ruling coalition managed to pass numerous laws that are likely to shape the country's future for years to come, despite the politically turbulent times the four cabinet parties continue to face.

In the sphere of legislation, the ruling parties remained strong enough to push through dozens of laws that were applauded by analysts who hope they will reform many areas, including education, taxes, and retirement, in this post-communist country.

Critics have at times argued that some of the 155 laws that were passed in parliament in 2003 went through at the at the expense of the original cabinet plan. Despite the criticism, analysts both at home and abroad welcomed many much-expected pieces of legislation.

In addition to the big reform packages, a number of laws that the right-wing cabinet, led by PM Mikuláš Dzurinda, pledged to the electorate in its program have been passed. These include a series of laws on health care that took effect in 2003, starting off reform in the indebted sector.

A law introducing fees for university education was passed, as was a law on large-scale privatisation that will allow the sale of stakes in major firms currently in state hands.

The Slovak Spectator has prepared an overview of some of the most important changes in Slovakia that take effect in January 2004. Due to space constraints it was not possible to include all changes in this account.

With the tax reform, Slovakia will now see all citizens and companies paying 19 percent of their gross earnings in tax as of January regardless of how much they earn. Before the unified tax, Slovakia used five tax rates for individuals ranging from 10 to 38 percent, based on individual incomes, and a rate of 25 percent for corporations. The Finance Ministry argued that the tax reform would increase or at least maintain the net earnings of all employees. Non-taxable income was increased to more than Sk80,000 (€1,948.39) per year up from the previous Sk38,760 (€944).

The tax reform promises the simplification of Slovakia's tax system. To compensate for the lower tax income, the tax reform also introduces a unified 19 percent value-added tax (VAT) on all consumer products. Prior to the tax reform, Slovakia had two VAT rates - at 14 and 20 percent. The unified 19 percent VAT is thus expected to increase the prices of some items, such as drugs, basic food items including bread and milk, books, health care utilities, transportation, energy, water, restaurant services, construction works, and several others that were previously taxed at the lower VAT rate.

As of January 1, 10 and 20 halier coins are out of print. The abolition of the small coins was driven by economic reasons: the cost of their production exceeded the actual value of the coins. During 2004, commercial banks and the central bank will collect these old coins free of charge. The smallest coin in Slovakia is now the 50 halier coin.

The retirement age has been increased to 62 for both men and women. Until now, women retired earlier than men. The retirement age will be gradually prolonged to 62 by nine months a year. Currently, men retire at 60 and women leave work between the ages of 53 and 57, depending on the number of children they have.

A law on large-scale privatisation will enable the government to sell its remaining stakes in major firms. Before the passage of this law the state had to keep a majority stake in all firms that it sold to investors. Among the firms whose stakes the cabinet plans to sell are power producer Slovenské elektrárne as well as heating firms across Slovakia. The cabinet has decided that, for now, it will not sell its remaining stakes in gas utility SPP and crude oil transportation firm Transpetrol. Both are minority owned by foreign investors.

Five of the 33 laws that the Justice Ministry proposed last year take effect in January. A new law on judges introduces stricter punishment of justices who commit crimes or neglect their duties.

Lawyers convicted of corruption and committing serious deliberate crimes will be banned from working in the profession.

Court clerks will start to carry some of the burden formerly on the shoulders of judges, especially in simple legal cases. A new system of electing chairs and vice-chairs of the Judicial Council, an independent judicial authority, has been introduced along with new rules for naming the members of disciplinary senates.

Slovakia will also see the creation of a judicial academy, an institution for the life-long education of justice employees. Mediation and probation officials respectively will start working to ensure the out of court settlement of simple cases and oversee former convicts in order to prevent them from repeatedly committing crimes.

As of January 1, 2004 two special units in the Slovak police are coordinating the fight against organised crime, including mafia groups.

A new system of state administration has begun operation. The previous 79 district offices have been compacted into a new set of 50 in order to cut the number of bureaucrats in these institutions. At the same time, specialized small offices dealing with social affairs, transportation, forestry, the environment, land affairs, educational issues, and construction will be created.

The changes are linked to the ongoing public administration reform in which a set of responsibilities that were carried out by the central government are being transferred to municipal and regional governments.

University students will partly pay for their education. At the same time, the introduction of a new social aid scheme enabling all students, including those from low-income families, to study at universities is expected.

The state will pay elementary and secondary schools per number of pupils rather than per number of classes opened in a school year, as was the case until recently. The new system puts state and private schools on an equal level in terms of financing.

An agricultural payment agency has been established to secure the drawing of EU funds for and to oversee direct payments to local farmers.

A new land restitution law will enable owners of land that was confiscated during communism between 1948 and 1990 to demand the return of their property. The law applies to those landowners who failed to request the return of their land in the early 1990s. If it proves impossible to return a specific piece of land to the owners due to, for example, the land's use as a cemetery, or if buildings were in the meantime built on the property, the state will secure a comparable piece of land or it will pay the landowners.