Strong growth of gross domestic product will continue and the Slovak crown will gain value; deregulated prices will rise, lightening consumers' pockets and putting pressure on the standard of living
IN 2004 the Slovak economy should experience an economic growth similar to that of last year. However, the average citizen will still not fully feel the positive effects of the recent economic and social reforms, analysts say in their prognosis. 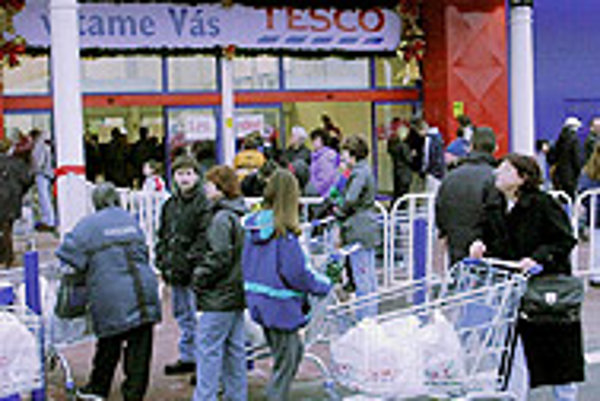 Font size:A-|A+0
Strong growth of gross domestic product will continue and the Slovak crown will gain value; deregulated prices will rise, lightening consumers' pockets and putting pressure on the standard of living

IN 2004 the Slovak economy should experience an economic growth similar to that of last year. However, the average citizen will still not fully feel the positive effects of the recent economic and social reforms, analysts say in their prognosis.

In its latest official Monetary Programme, the National Bank of Slovakia (NBS) predicted middle year-on-year growth of the 2004 Slovak gross domestic product (GDP) at 4 percent, in a range between 3.7 and 4.3 percent. This is one of the highest figures among European states, many of which are suffering from an economic recession.

Membership in the European Union; the tax, pension, and health care reforms; and the process of curing public finance are the factors that should most influence the Slovak economy in the forthcoming years. But, at the same time, the impossibility of a precise prediction of the results of reforms represents a certain risk for the economic future of the country.

According to analysts, economic growth this year should sprout from implemented reforms and investments. The introduction of the flat income tax rate at 19 percent will enable companies to invest money saved by the cut from the previous level of 25 percent.

Tatra banka analyst Róbert Prega agrees: "Unlike in 2003, domestic demand should become a significant source of economic growth this year. We expect that household consumption will start to grow this year and, thanks to recovering investment demand, the generation of gross fixed capital should become the most dynamic part of GDP."

Analysts and the central bank have not hidden the fact that price deregulation and the recently adopted restrictive steps aimed at cutting the public finance deficit will affect households as well as domestic demand, but the negative impacts should be less painful than they were last year.

Acknowledging this, Marek Gábriš of ČSOB then added: "Moreover, tax reform and the potential easing of monetary policy could stimulate corporate investment activity. We can predict some level of recovery in household consumption due to the expected [favourable] development of real wages."

However, Pavol Ondriska with Slávia Capital thinks domestic demand is at risk, as he is not sure whether the reformed business environment is presently strong enough to stimulate the investment activity of firms: "Unfortunately, household consumption will probably decrease again." He emphasized economic recovery in Europe as the main support for the predicted strong growth in Slovakia.

The expected economic success of business partners in neighbouring countries, which should pull Slovak exports forward next year, also appears in the Monetary Programme of the NBS. The foreign trade that so pleased economic experts last year should thus also play a positive role in the economy in 2004.

"We suggested that exports would have a strong effect on GDP last year. But the final result is much better that we had thought. And it happened despite the weak economic growth of other European countries. Exporting capacities built in recent years were probably the most helpful [for that process]," said Gábriš. Slovak exports were, for example, almost 27 percent higher in November 2003 than they had been in the previous November.

However, analysts have said that the year-on-year growth of exports this year should not be as surprisingly high as it was in 2003.

The NBS predicted: "After the significant growth in automotive industry exports in 2003, we can expect a milder increase in 2004. In line with the export limits of the European Union, we should anticipate a stagnation in the export of iron and steel.

"Imports should also show a slower growth rate, but generally, in 2004 the deficit of the current account of the balance of payments will grow."

According to economic experts and the NBS, the growing deficit will particularly result from stronger economic and investment activity; thus it should not cause much concern. Generally, this means that companies and investors in Slovakia will spend more on equipment, know-how, production capacities, and the strengthening of their international competitiveness.

According to analysts, the year 2004 should be successful for the Slovak crown as well. "We expect that the positive trends characterized by the strengthening of the Slovak crown and the lowering of exchange rates will last this year as well," Prega said.

The strong crown exchange rate should be based on an overall favourable evaluation of the Slovak economy by foreign investors, the strong growth of GDP, and the inflow of foreign investments. Prega predicted that the crown would strengthen this year to Sk40 /€1.

Unlike economists, citizens of the Slovak Republic, unfortunately, do not have any big reason to celebrate the coming of 2004. They will feel the reforms and price deregulation intensely in their wallets.

Benefits from the flat income tax rate and higher tax deductibles will substantially diminish as a consequence of the higher value-added tax (VAT), excise taxes, and higher energy prices that will influence literally every economic sector.

Energy prices were in the past subsidized by the state. According to the government and the highest energy regulation body, the Office of the Regulation of Network Industries, the prices did not fully reflect costs for energy production. Because Slovakia is trying to create a free-market environment and the state is suffering from a lack of money for further subsidies, price deregulation was inevitable.

The price deregulation started several years ago and it has been carried out gradually. Last year's government measures, which took effect from the beginning of this year, should draw the prices significantly closer to the market level.

"Gas prices will rise the most - by 27.8 percent for households. Heat prices, which depend on gas, will be hiked by 2 percent. Electricity will be 8.3 percent more expensive. We will pay about 30 percent more for water distribution. In addition, the prices will be even further increased by the higher VAT," said Gábriš.

According to the analyst for ČSOB, the new VAT is one of the highest within the European Union. The former 14 and 20 percent VAT rates were unified at 19 percent at the beginning of this year. "Even countries that have similar or higher rates use a lower VAT on selected goods," added Gábriš.

By entering the European Union in 2004, Slovakia will adopt the common EU agricultural policy. According to analysts, this will probably bring another price hike on selected foods.

The NBS also foresees a negative impact on food prices due to the unified VAT and 2003's weak harvest caused by droughts. "Food prices should increase this year by 1.2 - 5.7 percent," predicts the central bank.

In May this year, the date when Slovakia becomes a member of the EU, the excise tax on cigarettes will take effect. This will increase the price of a cigarette box by Sk1 (Ř.02).

In line with the expected price hikes and the government's measures, the central bank predicts inflation at the end of 2004 in the range of 5.5 - 7.3 percent and average inflation at 7.2 - 8.2 percent.

Ondriska said: "An evaluation of 2004 will depend upon the viewpoint. A common citizen will have to face new pressures on the deterioration of his living standard and so he will have pessimistic expectations.

"A deeper view will show us that reform steps move the Slovak economy closer to macroeconomic stability, which is one of the foundations for long and sustainable economic growth and, consequently, for a rising living standard. Thus, expectations for financial markets will be positive," he continued.

The most important political event in 2004 will definitely be Slovakia's joining the European Union in May. As analysts have said, from an economic point of view, the short-term impacts will not be that visible.

The preparations for Euro-integration have been the impetus for the economic and political changes of the last 10 years, and the most important reforms have largely been completed.

It is likely that Slovak companies may experience difficulty withstanding tougher competition in a united business environment.

"The long-term effects will be positive - the opening up of the market to know-how, the possibility of working and studying abroad, and increased foreign investments. This moment should lead to the increase in sophisticated production and services and consequently to a rising living standard in Slovakia," said UniBanka analyst Viliam Pätoprstý.