MARTINA Moravcová, the most famous Slovak swimmer of all time, has written a fascinating, if a little premature, autobiography.
Her book, Martina with Eva's Descent (Martina s rodokmeňom Evy, Bratislava: Ikar, 2003), co-authored by Ľubomír Souček, illuminates the challenges of being a world-class Slovak swimmer, how being famous in Slovakia has changed since the fall of communism, what it is like for a foreign athlete to study in the United States, and how the nature of swimming has changed over the past two decades. 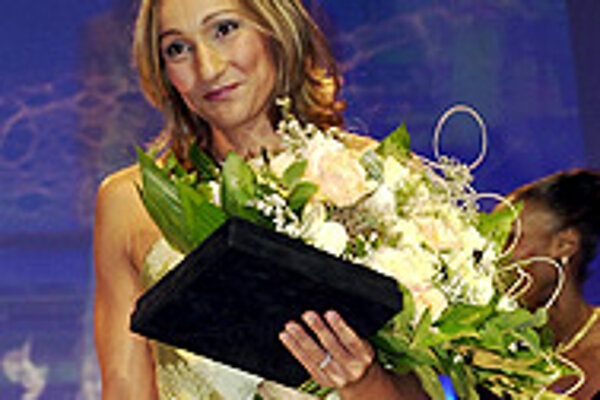 Font size:A-|A+0
MARTINA Moravcová, the most famous Slovak swimmer of all time, has written a fascinating, if a little premature, autobiography.

Her book, Martina with Eva's Descent (Martina s rodokmeňom Evy, Bratislava: Ikar, 2003), co-authored by Ľubomír Souček, illuminates the challenges of being a world-class Slovak swimmer, how being famous in Slovakia has changed since the fall of communism, what it is like for a foreign athlete to study in the United States, and how the nature of swimming has changed over the past two decades.

Moravcová won two silver medals at the 2000 Olympics. She has won 19 medals in the World Championships, including 6 gold ones. Half of the 36 medals she has won in European championships are gold. She has set three world records and close to 200 Slovak marks.

Last month she was chosen Slovak Athlete of the Year for the sixth time in the 11 years the award has been given. Probably in no other country has a woman dominated such an award.

In the book she is both proud of and modest about her success. She argues that she is only trying to swim the best she can, but she also happily counts up her successes.

In communist days the media would have praised her accomplishments and the public would have allowed her her privacy. Today, some media criticize her when she does not always win and she can't escape attention when she goes out into public in Slovakia.

Some of the complaints about her reflect the amounts of money she makes for winning races and setting records, a source of income not available to swimmers a decade ago, although the sums she wins pale in comparison to the income of soccer or hockey players, as she reminds us.

She acknowledges that her fame might not be so far-reaching if she were still swimming for a united Czechoslovakia since she would not be the only big fish in a little pond.

Yet since 1995, when she left Slovakia to attend Southern Methodist University (SMU), she has not lived here, but in Dallas, Texas, where she can train year-round in an outdoor 50-metre pool and help recruit for the SMU team.

Born to two former competitive swimmers, Moravcová almost never left the hospital after she was born with a serious case of newborn jaundice and double pneumonia. That experience did not seem to leave any mark on her. She grew up as an energetic, strong-willed, and highly competitive individual, even engaging her friends in worm races.

One of the most interesting parts of the book is Moravcová's description of the time she spent at SMU. She could not figure out at first if her times were good or not because she was swimming yards, rather than meters, for the first time. Even though she had a good command of English, she struggled during her first semester to understand all the lectures and textbooks.

She partied a lot that first year, too, describing one party where she got roaring drunk because she had not had enough to eat.

Perhaps the most interesting lesson she learned in the U.S. was the value of teamwork, a contrast to the individualized nature of swimming at the world level.

After completing her college swimming career, Martina's performance began to tail off. She swam tired and in pain and could not keep up with the workouts to which she was accustomed. She lost 30 percent of her muscle mass. Doctors at SMU initially thought it might reflect over-training or a virus, or be related to menstrual irregularity.

Back home in Slovakia, her mother, not restricted by cost or insurance laws, found the doctors who might best be able to identify the problem. They diagnosed her problem as Graves' disease, which causes an overactive thyroid. In order to have the best chance of maintaining her swimming career, Moravcová chose the most radical of three options for treatment: total removal of her thyroid.

Moravcová told the daily SME that she had long thought about and been encouraged to write this book. What finally persuaded her to go ahead was seeing the success of U.S. cyclist Lance Armstrong's autobiography.

If only she had ended the book after her success at the Olympics in Australia, or perhaps after her marriage to Martin Valek. After that the book lacks perspective. Her life has become so busy, even when out of the limelight in the United States, that she has little time to reflect. In much of the book she draws on material published in the press, especially by the second author, who is a reporter for the newspaper Sport.

Moravcová could well end her swimming career later this year in two major world events - the Olympics in Athens and the World Swimming Championships in Indianapolis, Indiana, a city where she achieved her greatest success as an "American" swimmer. In 1997 she was selected "swimmer of the championship" as she led her SMU team-mates to a second-place finish in the NCAA championships.

The Eva in the title is the swimming pool where she got her start in Piešťany. Today it is in wretched condition. Some people would love to see it replaced. Some think the new pool should be named Martina. But no one can find the money.

A Slovak government strapped for money cannot pay for it, and rich benefactors are still scarce. It points to a major challenge for sport in Slovakia. How can a country with the population of a middle-sized U.S. state (like Indiana) afford to support world-class competitors?

Instead, it exports its best hockey and soccer players, as well as people like Martina Moravcová. But even if she is overseas, we can share her life in this book.

Owen V. Johnson teaches journalism and announces swimming at Indiana University, where he also competes in master's swimming. He is spending this year doing research in Slovakia on the history of Slovak mass media in the 20th century.