2004 will be the year of conferences

ONLY when a burglar came to her house, knocked her down, and robbed her did she realise that the date of birth written on her identification card was inaccurate. The burglar was supposed to come a week later, the stars told her. The unexpected accident thus made her recalculate her birth. 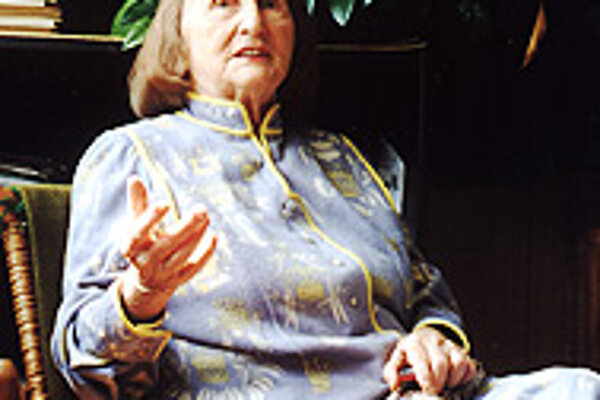 Font size:A-|A+  Comments disabled
ONLY when a burglar came to her house, knocked her down, and robbed her did she realise that the date of birth written on her identification card was inaccurate. The burglar was supposed to come a week later, the stars told her. The unexpected accident thus made her recalculate her birth.

"I found out that I was actually born two days earlier, on Sunday. My mom used to tell me that when I popped out, the house smelled of beef soup; in a village, beef soup was cooked only on Sundays. Then, it must have been truth. Later, I discovered that the date on my ID actually refers to the day I was baptised," says renowned actress Vilma Jamnická.

Recently reaching 97 years, Jamnická has lived for nearly a century, divided between her two passions - theatre and astrology.

The latter is the one that she has become increasingly devoted to these days, as turbulent events have occurred around the globe. The Slovak Spectator talked to her about these events and about what the new year will bring for people around the world.

The Slovak Spectator (TSS): In general, what will the year of 2004 be like according to the stars?

Vilma Jamnická (VJ): Mars [the planet of war] is on the side of Europe. In 2004, however, it will not be a war planet. Meeting with the Sun, Venus, and Mercury, it will create only conferences, though they will be characterised by fiery talks.

We will see two big conferences in Europe this year. The first one will take place in May, when we [Slovakia] should be accepted to the European Union. But because Mars crosses the route of Saturn, there will be a certain resistance there - I would say a reaction from the current EU states to what role we, the relatively smaller states that are to become new EU members, are to have in the union.

TSS: What about the second big conference?

VJ: If they keep the May 1 expansion date, the other big conference will be held in the EU in October and it will determine the conditions and the position of the new member states in the union. This conference will be joined by Jupiter, a planet of well being and good will. Despite the presence of Mars, it will again be nothing more than a conference with very fiery debates. Jupiter will make sure that it all ends well, but very many questions will remain open.

VJ: It does not look much like fighting because Mars will not run through the super-planets. It will start crossing the routes of the super-planets again in 2005, which will result in a few short wars. I think that George Bush will use his energy to practise his ideas [in the Middle East] if he is elected to the presidential post again.

This, though, will last only until June. Then Mars will jump to the other side and will not participate in any war.

TSS: Can you say whether US President George Bush has a chance to be reelected in the next elections?

VJ: I do have Bush's horoscope but I haven't dealt with this issue yet. He has a chance to win... He thinks that everything is going as smoothly as it did when his father forced Saddam Hussein out of Kuwait. But Arabs will not let their "Aladdin's lamp" go. They want to protect their oil fields.

There will be occasional terrorist acts this year, such as falling planes and so on. Terrorists defend themselves in a terrible way. There are people who back them so when Bush goes after them, it is like poking in a wasp nest. They sting on all sides, they are not afraid to sacrifice themselves... But they don't have the big weapons. Bush has them.

TSS: We will not achieve ultimate peace this year then?

VJ: One has to study peace. It is necessary to study math to be able to achieve big things. One must learn everything because nothing falls down from the sky. Especially not peace. And this is exactly what the EU is preparing us for.

TSS: You knew several years before the September 11, 2001 attack on US targets that something like that was coming...

VJ: I was following the path of the planets; I knew something big was going to happen. Uranus, the planet of terrorism, was in conjunction with Neptune, the planet of geniality, at the end of Capricorn during the last decade. But not everything is written in the stars. I was looking for what would happen, but I couldn't see anything... It was then that the terrorists agreed on their secret mission, misusing American hospitality as they enrolled in the pilot training programmes.

I named the conjunction of Uranus and Neptune "the genius of terrorism". Terrorists have the courage to throw their lives into death in the belief that they will be rewarded for fighting for their motherland. They believe they will go to heaven. But there are several grades of heaven. They believe in reincarnation, and that they will be reborn as something higher than what they were before they sacrificed their lives.

TSS: You also foresaw the war in Iraq last year...

VJ: Iraq was quite a hard fight and although it [Iraq] was conquered, they [terrorists] are not giving up. We still don't know how it will go. Saddam Hussein is not necessarily the main person. They still have no trace of Osama bin Laden.

There don't have to be wars. Mars moves quite fast. From Afghanistan it moved to Iraq, and now is heading to Iran... The fact that Mars touches other planets, such as Pluto, creates conditions for war, but there also needs to be someone who is so eager to fight or take revenge that he will start the war. There is a debate whether [the war in Iraq] is revenge for [attacking] the twin buildings or whether it is about the 'Aladdin's lamp'.

TSS: Focusing specifically on Slovakia, what will the year bring? People have seen many political problems...

VJ: Yes, there are problems but it seems like [Prime Minister Mikuláš] Dzurinda will stay in power. There are no signs of Dzurinda being so endangered that he would not be able to keep his position.

TSS: No early elections then?

VJ: For Slovakia it is not truly important whether or not there will be early elections. Much more important for this country is the acceptance to the EU. There are many planets giving the basis for heated debate [on this matter].

TSS: The year of 2004 is also the year of presidential elections in Slovakia. Do the stars say anything about the new president or the individual candidates?

VJ: I have a feeling that the current President [Rudolf] Schuster will stay in power, but that's just my personal observation. I do have the president's personal data but I have yet to look at it closely. So this is just my feeling.

VILMA JAMNICKÁ was born on November 11 (or November 13, according to her ID), in 1906 in Barchov, Czech Republic. She married Ján Jamnický, director, actor, and founder of the University of Performing and Drama Arts in Bratislava. Widowed for over 30 years, she lives in Bratislava.

Even though Jamnická started acting young, she says that most of the roles came after she retired in 1969. She starred in dozens of theatrical plays and several movies, including the recent Juraj Jakubisko film Lepšie je byť bohatý a zdravý ako chudobný a chorý (Better to be Rich and Healthy than Poor and Sick).

Thanks to her husband, she knows all the religions of the world. It was also thanks to him that she started to devote herself to astrology some 60 years ago. Persecuted during communism for her acting, widowed and childless, the vital Jamnická says she likes to live alone so that she can fully practice her hobby.

"If I had children, I would have to be there for the family and could not do what I wanted," she says. "I didn't have children and I am happy. If I had them I would be happy as well. People should not lament over what they don't have, but rather be happy about what they have in their life."

As a devoted astrologist, Jamnická has published several books on the matter. She is a respected and well-known figure among the local community of astrologists. Even though astrology is not appreciated as much in Slovakia as it is in Germany, for instance, and not certified as a science, Jamnická cannot complain about a lack of customers.

In three years, she will reach 100. Though her predictions usually come true, the stars have failed three times to predict her own death. Jamnická plans to detail what she has been through in her life in a book she is working on that should be published under the title I Lived the Whole Century.

Even though politicians do not come to her to ask for horoscopes - she does them secretly anyway - there has been one exception. Long ago, when they were colleagues in the theatre, she predicted the destiny of former culture minister Milan Kňažko.

"I told him that the stars said too much about him. According to the forecast, he should have been a terrorist, but I called him a revolutionary. And in fact, he was one of those who led the [Velvet] revolution in Prague in 1989," Jamnická says.