THE IRISH band Bell X1 is scheduled to play at the Slovak Pub in Bratislava on January 11. The concert is part of their Irish-government-supported tour of some of the states acceding to the European Union.
A day before playing in Slovakia, the band could be heard in the Czech Republic. 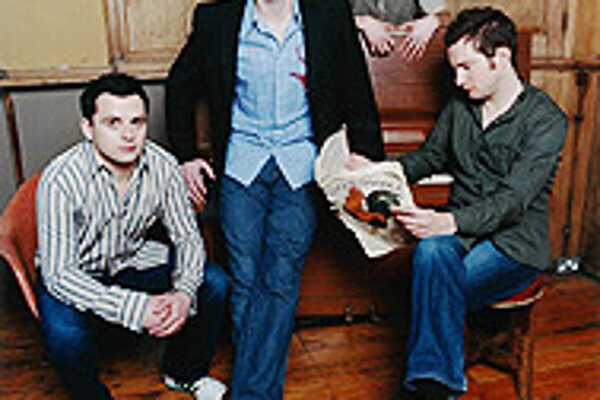 Font size:A-|A+0
THE IRISH band Bell X1 is scheduled to play at the Slovak Pub in Bratislava on January 11. The concert is part of their Irish-government-supported tour of some of the states acceding to the European Union.

A day before playing in Slovakia, the band could be heard in the Czech Republic. After Bratislava it heads to Hungary (Budapest's Ship A38 on January 12) and Poland (Krakow's Klub pod Jaszczurami on January 13 and Warsaw's St Patrick's Very Irish Pub on January 14).

"We've heard so many good things about many of the countries from our friends The Frames. So when we were approached by our government with a proposal that they would support a tour, we jumped at the chance," Paul Noonan, who sings and plays guitar in the four-member Bell X1 told The Slovak Spectator.

On their tour, Bell X1 are introducing their second record, Music in Mouth, which was released in the United Kingdom and Ireland last year on Island records and settled in the top 20 for a number of weeks in their home country. According to the band, it is a joyful record of love songs, "one that celebrates the people in our lives".

During the show, the band features a plethora of instruments, from banjo to sampled beats and what they call "farty" bass.

Even though they know little about the countries they are going to visit, they say that they are looking forward to spending some time in these places, especially during a period of change.

"We have never been to Slovakia before, and all we know we've heard from friends who have visited it. I know there is a strong presence of traditional music, of which people are very proud, much like it is in Ireland," Noonan said.

As the citizen of a country already integrated into the European family, he said he does not know "what tangible difference EU membership will make to peoples' lives in the short term. But anything that brings down borders and welcomes folks to a more level playing field is a good thing, I think!"