Dancing through winter to spring

THE HOLIDAY of the Three Kings, who travelled to the town of Bethlehem to bow to the newly born Jesus, ended the Christmas season last Tuesday. Simultaneously, it started the period of dance and entertainment - Shrovetide, or fašiangy.
From now until Ash Wednesday (February 25), six weeks before Easter, social happenings are scheduled to take places across the country, mainly during weekends. 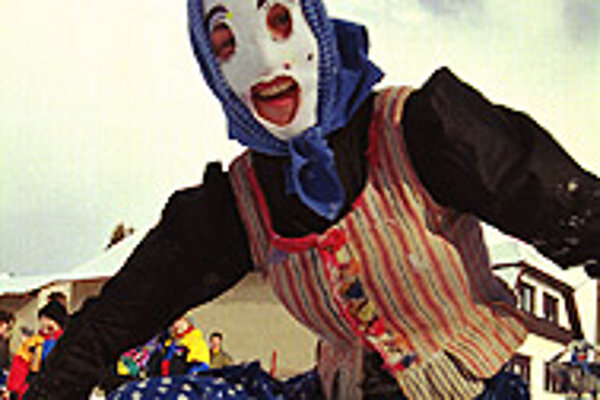 Font size:A-|A+  Comments disabled
THE HOLIDAY of the Three Kings, who travelled to the town of Bethlehem to bow to the newly born Jesus, ended the Christmas season last Tuesday. Simultaneously, it started the period of dance and entertainment - Shrovetide, or fašiangy.

From now until Ash Wednesday (February 25), six weeks before Easter, social happenings are scheduled to take places across the country, mainly during weekends. A symbolic burial of a double bass on the last Shrovetide Tuesday will mark the end of this entertaining period. Then Lent, the 40-day fast until Easter, will begin.

In the past, Shrovetide was the symbol of joviality, feasting and dancing in the villages and throwing elaborate balls and carnivals in the cities. By and large, the tradition has survived until today, albeit in a reduced and a slightly altered form.

Whereas in the cities there are the grandiose balls that loudly declare the ball season is here, villages use a quieter, though similarly effective, form of reciprocal communication: posters inviting citizens of one village to come to the festivities organised by another one.

The ball in the Opera House of the Slovak National Theatre opens this year's season on January 10. The interior decoration of more than 12,000 flowers is said to have been prepared by 60 people for three days and nights. Opera soloist Ľubica Vargicová, as well as Czech and Slovak popular singers - including the Elán band, the Devil's Violin of Berky Mrenica, and the Boom Band - are among the performers on the ball's programme, directed by Ján Ďurovčík.

"Since this is the fourth ball in the Opera, it is difficult to come up with something new that loses none of the majesty and magnificence," Ďurovčík told the SITA news agency, expressing his belief that the guests will find the entertainment to be as grandiose in style as usual.

Other balls in large cities and those held by companies will follow. Among them are the traditional Orava and Záhoracký balls, which take place at the former Culture and Leisure Park (PKO) in Bratislava on January 31 and February 7, respectively. Trnava will hold its annual charity ball on February 20, and Liptovský Mikuláš will organise its beneficial ball on January 17. The town of Dolný Kubín will throw its ball connected with the Ball of Health Officers on January 23. Health workers will also dance in Košice at the Ball of Child Oncology on January 31.

Apart from the balls, museums and galleries across the country will also celebrate the period by reviving the old time traditions kept mainly in rural areas. Castles and manor houses will organise entertaining events close to the end of the Shrovetide period. Budatín Castle in Žilina, for example, will hold the Fašiangy at the Castle happening on January 22 from 9:00 to 15:00. The park at the Manor House in Budimír, a few kilometres north of Košice, features three non-traditional large-scale sculptures created by Ladislav Gajdoš for his Slovak Shrovetide cycle. Malá Lehota, a village in the Žarnovica district, will, for the 16th time, bring together bagpipers, primarily from the surrounding countries, on the last Shrovetide weekend, from February 20 to 22, to hold the traditional Bagpipers' Fašiangy.

In villages, Shrovetide was traditionally connected with pig slaughtering, fun in masks, and lively music. On the last Shrovetide Sunday, men dressed in masks were accompanied by music as they wandered from door to door, where they were offered cakes, sausages, eggs, and something to drink. The whole village celebrated with them.

Few places still keep the original spirit of these traditions alive. To avoid missing the opportunity to experience the mask parades on the last Shrovetide weekend, head to tiny villages nestled under mountains, like Nolčovo, which is northeast of Martin; Leštiny and Istebné, which are near Dolný Kubín; Batizovce, under the High Tatras; or Rudno nad Hronom, south of Žarnovica.