FOLLOWING weeks of uncertainty, former Defence Minister Ivan Šimko has decided his newly founded Free Forum (SF) party will not enter the ruling coalition as long as PM Mikuláš Dzurinda stays in office. As a result, the current coalition has definitely lost its parliamentary majority.
"We can only support a cabinet which is not headed by Mikuláš Dzurinda," said Šimko, who is now a member of parliament, on behalf of the SF at a press conference on January 14. 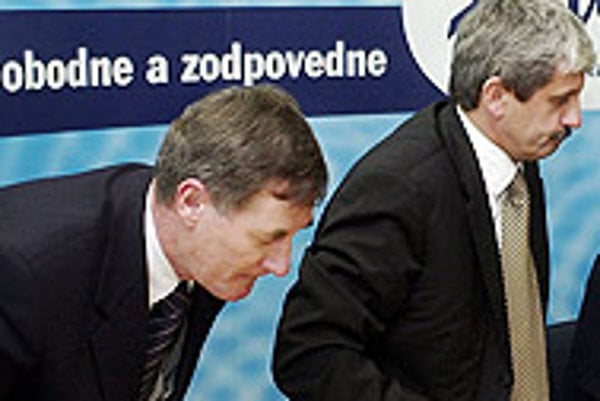 "We can only support a cabinet which is not headed by Mikuláš Dzurinda," said Šimko, who is now a member of parliament, on behalf of the SF at a press conference on January 14.

"The SF is not interested in any cabinet seat or any position within the coalition, and we are willing to support and become a part of the coalition only under the condition that there is a change of prime ministers," he added.

The SF has pledged its support for all future legislative proposals that will be in line with the government's manifesto. However, Šimko's party will decide whether to vote in favour of specific drafts on a case-by-case basis. The same will go for any votes of confidence in governmental ministers.

Šimko's statements came after a meeting with the heads of the four coalition partners in which top coalition representatives hoped to reach an agreement with Šimko's faction and ensure that the government could again rely on the backing of more than 75 MPs out of the 150-member legislative assembly.

After the September 2002 general elections, the ruling coalition started off with a tight majority of 78 seats in the legislature but continued to lose ground throughout the previous year. The hardest blow came when Šimko and his group of six former members of PM Dzurinda's Slovak Democratic and Christian Union (SDKÚ) decided to leave the party's caucus at the end of the year.

The ruling parties now officially hold only 68 seats in parliament.

The SDKÚ is unprepared to let Šimko have his way. SDKÚ vice-chairman and Finance Minister Ivan Mikloš called the SF's demand to replace Dzurinda "absolutely ungrounded", according to the SITA news wire.

"It shows that Šimko is driven by his hurt feelings and by a need for revenge," he said, and added that it is improbable that the SDKÚ will consider his call for Dzurinda's withdrawal.

Coalition partners seemed upset about the failure of the talks.

"The conflict between Dzurinda and Šimko threatens the stability of the entire country," reads a statement issued by Pavol Hrušovský, boss of the Christian Democratic Movement, a ruling coalition party.

"The Christian Democratic Movement feels the situation should be solved by adding the SF as a fifth member to the coalition. Both Dzurinda and Šimko turned down this possibility. The two of them are therefore responsible for further developments in Slovakia," Hrušovský added, stressing that his party remains open to agreements that would lead to the restoration of a parliamentary majority.

The opposition party Smer has declined to comment on the recent developments.

"We see no reason to waste our time and energy explaining things for which Dzurinda has only himself to blame," said Smer chairman Robert Fico.

Fico stressed that he is currently focusing his efforts exclusively on bringing about early elections.

However, Fico said he remains open to any attempts to recall the present cabinet. "I will welcome any legitimate means of ending the looting currently organised by Dzurinda," said Fico, who has repeatedly accused the government of cronyism and of selling state property to foreign investors under unfavourable terms.

Smer is currently by far the most popular political party. Nearly a third of decided voters would vote for the party, according to the results of a survey conducted by the state Statistics Office that was released on December 15, 2003. The opposition party Movement for a Democratic Slovakia (HZDS) is in second place with 17 percent, said the poll.

However, the HZDS was reluctant to praise or condemn Šimko's demands.

"These are internal problems of the ruling coalition in which we don't plan to get involved in any way," said HZDS spokesman Igor Žvach.

The HZDS received 19.5 percent of the votes in the 2002 parliamentary elections. Its popularity figures fell after internal disputes led to the breakup of the party, which was headed by former PM Vladimír Mečiar. After the split a group of 11 MPs left the HZDS caucus.

However, in recent months the HZDS has been regaining some strength, with support rising by over 4 percent in the last month of 2003, according to the Statistics Office. Some analysts point out that the HZDS does not want to rush into early elections, which would now bring it little gain.

The SF was launched in mid-November as a platform within the SDKÚ by Šimko, the union's co-founder and Dzurinda's long-time political twin, who as defence minister refused to vote in line with party orders in a crucial cabinet vote in September 2003.

As a result, Dzurinda stripped him of both his ministerial seat and the post of SDKÚ vice-chairman, claiming that party discipline was a crucial element for the function of the coalition.

The SF's main aim was initially to facilitate free discussion within the SDKÚ and promote a return to the party's original values. Šimko claimed that Dzurinda used authoritarian methods within the party, placing personal interests over the interests of the country and made it his priority to transform the SDKÚ from within.

In early December of 2003 it became clear that a truce between the two warring factions within the SDKÚ could not be reached, leading Šimko to announce that he and a group of his faithful were leaving the party and starting their own.

From the start, Šimko failed to specify under what terms he would back the coalition. For his part, Dzurinda declared in early December that "no seats in the cabinet are free" for Šimko or his people, which has since become his mantra.

Now Šimko's party is even clearing the positions it already has. Deputy speaker of parliament Zuzana Martináková, a founding member of the SF, has announced her plans to resign from her post despite the fact that no member of the coalition has called on her to do so.

"I will be a member of a different party than the one which nominated me to the post of deputy speaker and it is an unwritten political rule that I should make this post available," she said on January 9.

Finding a replacement for Martináková may prove to be a headache. When the leader of the co-ruling New Citizen's Alliance left that position, for which there are four seats, to serve as Economy Minister in September 2003, the already divided coalition was unable to elect his successor. The seat he held has been vacant ever since.

In the event that the ruling parties prove unable to reach a deal with the SF, the minority government will be forced to look for other ways of making sure their agenda passes in the legislature. No one has yet suggested that the coalition could achieve a majority by taking on board one of the opposition parties.

Smer has repeatedly stated that early elections are the only option for them. The HZDS says it will only support a minority government in the event that an agreement is made on the date of early elections.

Speaking on behalf of the Hungarian Coalition Party, Bugár has argued that the HZDS breakaways united in the People's Union party (ĽÚ) should not become the coalition's allies.

"That is out of the question," he said, arguing that even the ĽÚ's vice-chairman, Oľga Keltošová, has publicly opposed such cooperation.

Numerous representatives of the coalition have admitted that, if no agreement is found, perhaps the MPs will vote to end their own terms prematurely.

"There are still solutions other than early parliamentary elections," said Bugár.

"But it is going to take some common sense," he added.