Vote on early elections not binding on MPs?

A NEW TURN came in the debate over possible early elections in Slovakia with the statement by the country's Constitutional Court President Ján Mazák that the result of a referendum is not binding for MPs.
Mazák, who heads Slovakia's authority for resolving legal disputes, said on January 8 that the result of a referendum did not automatically bind any state bodies to act in a certain way. The people's vote, he said, is only of an advisory character for lawmakers. 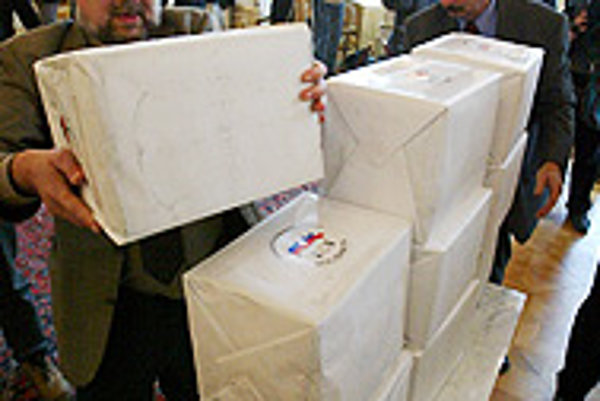 Font size:A-|A+0
A NEW TURN came in the debate over possible early elections in Slovakia with the statement by the country's Constitutional Court President Ján Mazák that the result of a referendum is not binding for MPs.

Mazák, who heads Slovakia's authority for resolving legal disputes, said on January 8 that the result of a referendum did not automatically bind any state bodies to act in a certain way. The people's vote, he said, is only of an advisory character for lawmakers.

The statement shed a new light on the planned referendum on early elections initiated by the Slovak trade unions. Their petition calls for the vote in the hope of bringing down the current right wing cabinet led by PM Mikuláš Dzurinda.

The Smer party, which is the strongest political supporter of early elections, was outraged by Mazák's statement and called for his resignation.

Several other lawyers, such as co-author of the Slovak Constitution Peter Kresák, share Mazák's opinion that the results of the referendum are not binding for MPs.

If more than 50 percent of voters participate in the referendum and the majority vote for early elections, MPs will still have to approve a law shortening the current cabinet's term by a majority of three-fifths, or 90 votes, before elections can take place.

In an official statement on January 9, President Rudolf Schuster said that it was unfortunate that Mazák made the comment regarding the referendum.

"It is as if he wanted to tell the citizens that it does not matter whether they go to a referendum or not because the parliament will make its own decision anyway," Schuster said.

But Mazák defended himself by saying he was talking about referenda in general, regardless of the current political situation.

"The verdict said that a referendum decides matters on which the parliament cannot, is not willing to, or is unable to decide - except for issues that are specifically set in the constitution, that is, basic human rights, the state budget, and taxes," he said.

"It is a mistake to say that the referendum cannot be held on the issue of early elections," Šafárik added.

"Except for the issues named specifically above, the referendum can be held on any matter of public interest. Ignoring the referendum would clearly mean the dismantlement of the legal state."

While lawyers and politicians are split over the binding character of referenda, President Schuster has not yet stated what action he will take in response to the petition, which was delivered to his office on January 13. Almost 600,000 signatures were collected.

In an official procedure, the president's office first has to confirm that at least 350,000 signatures are valid. If so, the president announces the referendum.

According to the constitution, the president can also turn to the Constitutional Court if there are some doubts about the referendum or about the question that the voters are expected to vote on.

PM Dzurinda, meanwhile, insisted that the referendum was "dishonest and unfair".

"The cabinet has decided to carry out unpopular reforms in its first year in office and when someone tries to capitalize on this, then I think it is dishonest," Dzurinda said on January 11.

Robert Fico, the head of the Smer party, maintained that the current cabinet needed to be replaced because its "current style of politics damages the social fabric of the state".

But Fico stands alone in pushing vehemently for early elections.

Although the Communist Party, which is part of the opposition, has also protested the current cabinet's right wing reforms, the second biggest opposition group after Smer, the Movement for a Democratic Slovakia (HZDS), is not convinced of the necessity of overturning the cabinet.

HZDS chairman Vladimír Mečiar said in a political discussion on the public channel Slovak Television on January 11 that he agreed that a legally binding referendum was "a basic human and civic right" but pointed out that there was no alternative to the current cabinet so far.

"There has to be an alternative to this cabinet. The alternative is missing and [an agreement] is not anywhere in sight among the opposition parties, about which I am very sorry," Mečiar said.

Fico, however, accused Mazák of opening a campaign against early elections and insisted that people had a right to elect and to recall their cabinet.

During his recent visit to Slovakia, Bruce Jackson, chairman of the US Committee on NATO, told the private SITA news agency that NATO would not like to see a new government every six months, as a government should have time to elaborate and carry out a reform agenda.