INTOLERANCE towards refugees in Slovakia is minimal. However, the country's asylum system is fragile and might not be effective enough to handle the increasing number of asylum seekers once it enters the EU. The numbers are critical. In 2003, only 10 of 10,350 asylum seekers in Slovakia received a positive decision on their application. 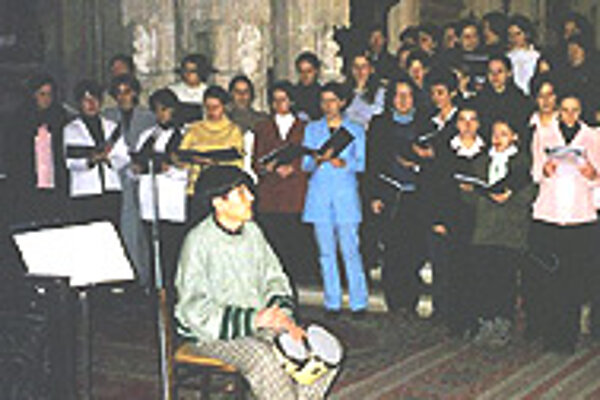 Font size:A-|A+0
INTOLERANCE towards refugees in Slovakia is minimal. However, the country's asylum system is fragile and might not be effective enough to handle the increasing number of asylum seekers once it enters the EU. The numbers are critical. In 2003, only 10 of 10,350 asylum seekers in Slovakia received a positive decision on their application. The vast majority of asylum seekers simply "disappeared", moving westwards or into the market of human trafficking, said Pierfrancesco Maria Natta, the representative of the United Nations High Commissioner of Refuges (UNHCR) to Slovakia in an interview with The Slovak Spectator.

The Slovak Spectator (TSS): The new law on asylum took effect in early January 2003. Has the legislation brought some improvements to the field?

Pierfrancesco Maria Natta (PMN): The 2003 law harmonises Slovakia's asylum legislation with EU laws. The main improvement is the introduction of appellate courts to review asylum cases a second time. The move provides more safeguards to prevent the return of asylum seekers to countries where they face threats to their lives and violations of human rights. It was a good decision to have the courts involved in the process.

TSS: The UNHCR proposed the formation of a working group to evaluate the most urgent asylum policy issues and legislation and the situation of asylum seekers in Slovakia. Has the operation of this group been effective?

PMN: In fact, the task force here in Slovakia, which is divided into four working groups, has created a model of cooperation involving all the parties of the refugee programme so effective that it could be applied in other countries of the region. The initial idea was to monitor the current refugee system prior to the country's entry into the EU. The UNHCR, International Migration Office, European Commission Delegation, the Dutch and the US embassies, and the third sector are involved, along with the Slovak Interior Ministry, which can well use the findings to revise the country's asylum and migration policies. The process will flow into a comprehensive report that should come out in February and include recommendations for improvements. It is indeed a success that the parties have taken the commitment to work together and prepare for the crucial months that will bring on increasing number of asylum seekers to Slovakia. However, it will be important to implement the recommendations for urgent changes in the system.

TSS: How will EU entry influence the country's asylum policy? How will the application of the Dublin II regulation and Eurodac affect Slovakia?

PMN: Within the EU there is a process of harmonising the asylum legislation of the member and candidate countries. However, the result is that individual countries, which were giving different guarantees to asylum seekers, are now reducing them to the minimum level that will become the standard requested by EU legislation. That is a negative factor. For example, Slovakia has quite a good model, but now when the country joins the EU and fits its laws to the requested minimum standards, the situation of refugees will not improve.

Last month, the UNHCR requested that the Italian presidency not approve a new directive in order to avoid having standards pushed to an acceptable minimum level. However, the real problems for Slovakia will start with the Dublin II regulation and Eurodac. The latter will drastically change Slovakia's asylum conditions, turning it from a transit country to one hosting applicants for refugee status. In fact, these two mechanisms will allow EU countries to send applicants back to the border countries where they have requested asylum. This will surely put an unbearable burden on the Slovak system.

TSS: In late September, the UNHCR's Bratislava office issued a statement expressing concerns over the high disappearance rate of asylum seekers in Slovakia. Over the first eight months of 2003, more than 5,000 people applied for asylum. Nearly all of them left for Western countries before receiving a decision.

PMN: We expressed concern in particular over the fate of 2,000 unaccompanied minors who "disappeared" in 2002. We know that the vast majority intended to reach wealthier countries, but they applied for the protection of the Slovak authorities and this should have prevented their contact with underhanded smugglers and human traffickers. The situation has not improved and nearly all the applicants in 2003 also disappeared. It is necessary to stress that this is not an isolated phenomenon. Two-thirds of Austria's applicants also disappear. The phenomenon is aggravated by Slovakia's low acceptance rate, which is the lowest in Europe. Last year, only 7 or 8 people were recognized out of 10,000 applicants.

TSS: In early 2003, the UNHCR launched a campaign to increase the awareness of refugees among Slovak citizens. Has the campaign been successful?

PMN: We have an ongoing campaign. Every year we try to target the universities, schools, parliament, and other state and public administration bodies. We had a high-profile program on World Refugee Day, June 20, and presented Speaker of Parliament Pavol Hrušovský with a special handbook for parliamentarians on the protection of refugees.

TSS: Do you feel that Slovaks are becoming more open towards foreign nationals and, most importantly, refugees? Or does this central European country still struggle with the post-communist paranoia of foreigners?

PMN: Two years ago we ran a survey on the Slovak public's attitude towards refugees, which showed that there is only a minimal intolerance towards them in this society. This is an interesting phenomenon because foreign media have often criticized Slovakia for being intolerant, particularly towards the Roma. But this might be a consequence of Slovakia having produced refugees in the past. Czechs and Slovaks sought shelter with Western countries when they were escaping from the communist regime. For example, in Gabčíkovo and Rohovce, where we have refugee camps, we have not seen many cases of intolerance by the locals.

TSS: The UNHCR says that the number of asylum seekers in Slovakia has been the highest in central Europe. Do you expect this number to increase even more during the upcoming years?

PMN: Yes, in the last three years a sharp increase of applicants has been noticed, particularly from countries that do not normally produce refugees (such as India, China, and Bangladesh). Human traffickers have targeted Slovakia as a soft spot for running their illegal business. The fact that all three of the country's refugee centres are located only a few kilometres from the western border was a strong incentive for human traffickers to pick Slovakia. The situation will probably get even worse after the country enters the EU, if the system is not modified.

The previous system was designed to make incoming people move westward. Slovakia did that to Austria, which did it to Germany, and Germany did it to France, etc. But the Dublin regulation puts an end to this system and will send asylum seekers back to the country where they first requested asylum.

TSS: Your organisation has been critical of the Migration Office and related departments of the Interior Ministry. What are the greatest shortcomings of the Slovak asylum system? Is it only the lack of trained staff?

PMN: I need to clarify that we are not criticising the migration office itself, but the system. The office is understaffed and the employees work under very difficult conditions with salaries not equal to the importance of their tasks. However, our task is not that of criticising, but that of finding solutions in cooperation with the government. We believe the task force I mentioned earlier has achieved that goal.

Concerning the gaps, the task force has found that a system that on paper was valid 10 years ago ,when there were 112 times less applicants, cannot be effective today. The shortages in staffing, the low salaries, the lack of material resources, the absence of career incentives, and the location of the refugee centres are all factors that have a negative impact on the system. Besides, the asylum agenda is not truly among the priorities of the government.

Ten years ago, three or four people were handling asylum interviews and related duties. Today, there are 17 interviewers on the staff, which indeed is an increase, but in relation to the number of asylum seekers it is insufficient. For example, in the Czech Republic, there are 65, without mentioning the interpreters.

This is why the UNHCR has suggested that the processing of asylum seekers be done by EU teams. This way countries in the centre would share their human resources with countries at the border. The cost of these activities would then be a European one.

TSS: Do you feel that the third sector and NGOs have been active enough at raising awareness about the problems of refugees?

PMN: There are only four (very dedicated) NGOs working in this crucial area and they are heavily dependent on UNHCR aid. In this context it is interesting to know that the UNHCR brings $600,000 (€470,072) annually to the country. The government provides the UNHCR with free utilities and €10,000 annually. We hope that this contribution will increase in the future. The NGOs are only minimally financed through governmental projects. But we do hope EU entry will change this attitude.