THE ŽILINA region is trying to overcome the consequences of its recent industrial past.
After the second world war, officials of the socialist government approved the development of heavy industry oriented towards military production in this region's green, rural lowlands and pastures.
After the dissolution of the military Warsaw pact, of which the former Czechoslovakia was a member, conditions changed and military production stopped. 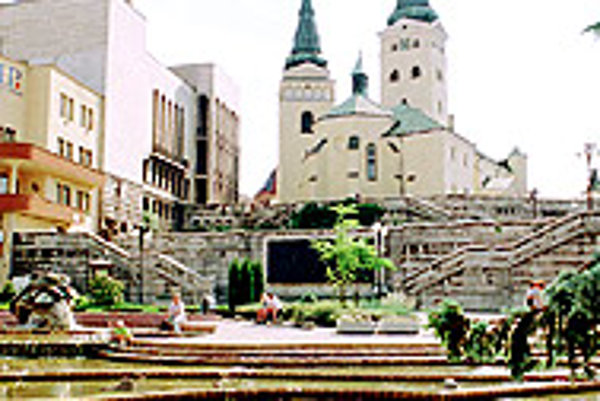 THE ŽILINA region is trying to overcome the consequences of its recent industrial past.

After the second world war, officials of the socialist government approved the development of heavy industry oriented towards military production in this region's green, rural lowlands and pastures.

After the dissolution of the military Warsaw pact, of which the former Czechoslovakia was a member, conditions changed and military production stopped. Production capacities have since remained unused and the region's unemployed often try to find jobs nearby in the Czech Republic and Poland.

One of the priorities of the last few governments has been to switch the region's industrial production from military to civil ends. Meanwhile, in spite of 50 years of industry, the region is rich in natural beauties, but tourist services remain under-developed.

Change seems to be the way to future success. However, it will not be simple or painless. The region needs clear business plans, modern know-how, and investments that, today, mainly come from foreign sources. The region is still holding onto its industrial tradition but it is looking for ways to branch out.

The Žilina region is located in the northwestern part of the Slovak Republic. It borders Poland and the Czech Republic. Varied landscape is typical of the region.

There you can find densely inhabited lowlands near rivers like the Váh, Kysuca, Turiec, and Orava, and almost unsettled mountainous countryside in parts of the High and Low Tatras, Chočské vrchy hills, Veľká and Malá Fatra, and Javorníky and Strážovské vrchy hills.

As a result, more than half of the region's territory, 51.2 percent, is protected by the state as part of special natural areas.

With an area of 6,788 square kilometres, the region is the third largest in Slovakia. It has 693,000 inhabitants, ranking it the fourth most inhabited of the Slovak regions.

The unemployment rate in the Žilina region reached the fourth lowest position in Slovakia in 2002, which, however, still comes to 17.3 percent. Employees here earn an average monthly salary of Sk12,057 (€296.48), a figure close to the median when compared to the other regions in Slovakia.

Of the Žilina region's four universities, the biggest is Žilinská univerzita. In line with the economic character of the region, its faculties mainly provide a technical education, for example through the faculty of operation and management in transport and communication, and the management and information technologies, construction, electrotechnical, and civil engineering faculties.

The private Catholic University focuses on pedagogy and philosophy. Jessenius medical faculty, which belongs to the Commenius university of Bratislava, operates in Martin. Finally, there is the Military Technical Academy in Liptovský Mikuláš.

The economy of the region is based on industry and construction. This is the result of the lack of fertile and arable soil in the region as well as the proximity of industrial zones in the neighbouring Czech Republic and Poland.

Industry and construction generate about 32 percent of Žilina's gross domestic product (GDP). The region reaches an almost 11 percent share of the overall generation of GDP in Slovakia, ranking Žilina fifth of all Slovak regions.

Industry and construction is followed in GDP by commerce, hotel services, transportation, telecommunications, and then banking and insurance services.

The economic character of the region also derives from the socialist past when the government located military production here, especially in the town of Martin. Connected industries like metallurgy, machinery, and electrotechnics were also attached to this kind of production.

After the Velvet Revolution and the collapse of the market of the former Warsaw military pact, military production was suppressed.

Some of the industries switched to civil production, though some could not. However, the mechanical and electrotechnical industries left well-educated, unemployed, and inexpensive labour hoping for new factories.

The metallurgical industry is represented by OFZ Istebné, and chemical production by Acquachemia and Barlo Plastics. Kinex in Bytča, KLF and Ina in Kysucké Nové Mesto, AVC in Čadca, and Volkswagen in Martin represent mechanical industry, while Alcatel in Liptovský Hrádok works in the electrotechnical industrial field.

Váhostav in Žilina plays an important role in the strong construction industry. One of the largest Slovak dairy companies supported by foreign capital, Liptovská mliekáreň, is in the city of Liptovský Mikuláš.

Agriculture is only a minor sector in the Žilina region. It mainly concentrates on raising livestock and growing grains and potatoes.

By the end of June 2003, approximately Sk12.3 billion (€302.45 million) had flowed into the region through foreign direct investments, which puts Žilina at fourth place in the receipt of such investments in all of Slovakia.

Foreign investors have so far bet on the region's industrial tradition, in which they found the automotive, machinery, and electrotechnical industries to be the most attractive fields in which for to put their finances. Important investments have also been made in the chemical industry and in shoe, leather, and furniture production.

A potential investor can take advantage of the qualified and relatively cheap labour force, skilled mainly in the electrotechnical and mechanical fields, and can use existing production capacities in those areas.

Forests provide the potential for the use of wooden material, and the natural beauties of the High and Low Tatras, Chočské vrchy hills, and Veľká and Malá Fatra, as well as old spas in Turčianske Teplice and Rajecké Teplice offer vast tourism possibilities.

Industrial parks still have not been developed in this region, although many districts have approved possible locations for their future industrial zones and parks.

In May 2001, the city council of Liptovský Mikuláš legally expressed its intention to build an industrial park. An association of representatives of the municipalities of Liptovský Mikuláš, Beňadiková, Závažná Poruba, and Uhorská Ves was created. There are two alternatives for its development.

The first is that an industrial park would be located in an existing industrial zone in the southeastern part of Liptovský Mikuláš with available land for newcomers. The industrial zone already has a complete infrastructure and road connection. Currently, 19 companies operate there.

The second option is to build the park on a greenfield site that requires the construction of new infrastructure.

An industrial park located in the northeastern part of Martin is scheduled to be built on a greenfield, though international companies like ECCO Slovakia and Volkswagen are already present in the region.

The park should cover 172 hectares of land and has favourable transportation possibilities. However, ownership of some of the land is still under dispute, which has already discouraged some potential investors.

The city council of Námestovo also approved the construction of an industrial park in its development plan. Land ownership has been settled and infrastructure is being finalized for manufacturers currently working there. The main investor already operating in the park is the company Punch Assemblies.

According to Turčianske Teplice's development plan, an industrial park should be built on a 25-hectare area near the city. However, a feasibility study has not been prepared and the official founder of the park is not yet known.

Low labour costs, strong energy sources, developed infrastructure, and proximity to one of the main Slovak railway crossroads are advantages that the Žilina region can offer the Hyundai company, which is seeking a place in central Europe to build a new car assembly plant for about $1.5 billion (€1.18 billion) that will produce 300,000 cars a year.

The Žilina region and the Radomsko region in Poland have managed to get onto the shortlist of possible sites for the plant. Apart from Slovakia and Poland, Hyundai also evaluated sites in the Czech Republic and Hungary. The car producer should make a final decision between Slovakia and Poland this spring.

Slovakia offered Hyundai a 270-hectare site near Žilina, in the municipalities of Gbeľany, Teplička nad Váhom, Nededza, and Mojš. There is also the possibility that the carmaker will build a logistics centre in Dubnica nad Váhom.

One shortcoming of the proposed site could be the unfinished highway network. Officials claim, however, that a highway from Žilina to Bratislava (with already existing connections to Austria and Prague) will be completed by 2008.

"The flat tax rate, ... good cooperation between the regional government and the state, the well-written offer of the Žilina region, the low price of labour, and a good macroeconomic environment that is clearly heading towards economic growth are the benefits [for Hyundai]," Rusko said recently.

Apart from the above-mentioned advantages, the Slovak government also offered the carmaker special stimuli that they said an investment of such a size certainly deserved.

Even if Žilina does not win the Korean investments, the Hyundai shortlist shows that the region is competitive, high on the list of prospective development sites, and has favourable investment conditions.

"Žilina was selected as one of the two potential sites for the construction of the plant. We have carefully evaluated the project in consideration of several factors, including the supply of spare parts, the labour market, logistics and distribution costs, infrastructure, and certainly all the investment stimuli offered by the government," reads a letter that the Hyundai management sent to the Slovak Economy Ministry, according to the daily SME.

A regional highway network is only partially complete. Construction of the highway D1 (Bratislava - Žilina - Košice) is a priority for the government, as it is one of the important preconditions for the development of business activities in the region and the whole of Slovakia.

On the other hand, railway lines in Žilina are well developed. Žilina is one of the main railway meeting points in Slovakia and there is also a direct connection to Poland and the Czech Republic.

A regional airport in Dolný Hričov, near Žilina, has the ambition of becoming an international airport.

Today it is mainly used by international and domestic customers as the quickest way of getting to business negotiations. Cargo airplanes and tourists land there only occasionally.

The introduction of a regular line flying to Dolný Hričov could be a help for the airport, but first it must be, of course, economically profitable for an airline company.

The Slovak Investment and Real Estate Agency, which is an owner of the airport, is hoping to create an airport industrial zone in Dolný Hričov in the future. Apart from personal air transport facilities, it also intents to build customs warehouses, logistics and shipping centres, and cargo transportation facilities.

The project also plans the construction of hotels, congress centres, and relaxation and sports facilities.