AUTHOR, journalist, teacher, MP, minister, director - in one way or another, László Dobos has been present in the cultural and public life of ethnic Hungarians in Slovakia for decades. Ten years ago, neighbouring Hungary acknowledged his contribution to literature by presenting him with the highest Hungarian cultural honour, the Kossuth Award. Now he is among the 18 personalities who received the Pribina Cross, a high Slovak state award, on January 1, the day of Slovakia's independence. 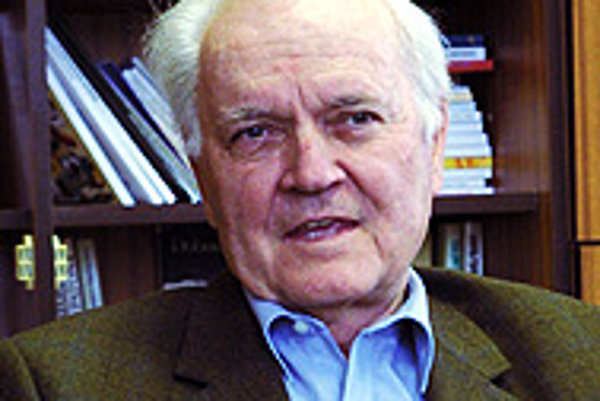 AUTHOR, journalist, teacher, MP, minister, director - in one way or another, László Dobos has been present in the cultural and public life of ethnic Hungarians in Slovakia for decades. Ten years ago, neighbouring Hungary acknowledged his contribution to literature by presenting him with the highest Hungarian cultural honour, the Kossuth Award. Now he is among the 18 personalities who received the Pribina Cross, a high Slovak state award, on January 1, the day of Slovakia's independence. In an interview with The Slovak Spectator, László Dobos shared his views on the evolving situation of ethnic Hungarians in Slovakia.

The Slovak Spectator (TSS): Before we talk about the Pribina Cross, which you earlier said was given, through you, to all ethnic Hungarians in Slovakia, let me mention the Hungarian Kossuth Award, the highest possible acknowledgement a writer can receive from the Hungarian government. With this award did Hungary acknowledge all writers living in Slovakia that publish their work in Hungarian?

TSS: Marking the country's independence day, Slovak President Rudolf Schuster awarded you with the Pribina Cross Third Class. In his speech he praised your activities in public life and especially your presence in the Czechoslovak government in the late 1960s.

LD: Prior to the ceremony, the list of all my novels had to be turned in to the authorities. Interestingly enough, however, it was my contribution to public life, my role as a minister for minorities in 1969, that was highlighted in the appreciation.

TSS: After the Soviet invasion and the following era of consolidation, you were literally erased from public life and the authorities muted you for two decades. What did these twenty years of public silence give you?

LD: Yes, I was completely wiped out of everything and then rehabilitated as late as 1990. And what did this period provide me? An enormous experience. When you are in the government, you belong to everybody. Once you fall, nobody even wants to know you. I have experienced this state of being nobody. You are either overridden by such years or strengthened by them. I was given an enormous obduracy that cannot be destroyed. It will last for the rest of my life.

TSS: Why did you get involved in politics after the 1989 Velvet Revolution? And why did you quit after 1994?

LD: The reason I got my teeth into politics in the first place was that I thought politics was a more powerful tool than literature. I was fascinated by the power and effect politics and politicians had. I knew that more could be done via the instrument of politics than, say, by five novels. And the reason I bid farewell to the parliament was that, in the end, this work totally got on my nerves. There was this quality to the law-making process in parliament: We could say anything, protest, complain, raise objections, but the majority always outvoted us. All of this resulted in a heart condition; later I had to be operated on.

TSS: For years you have not published any novels. Provided that you find some time to sit down at the computer again, what is it that you still want to write about?

LD: First, I want to write about the drama of 1968. This period was one of the biggest chances this country had. But the communist reform movement turned out to be an unsuccessful attempt to overthrow the Soviet regime. And there is, of course, plenty more to write. I would also hand over my position as director of the [Madách-Posonium] publishing house to someone else. However, cultural work as such fails to attract young people. There is not much glamour and money in culture, literature, and art in Slovakia.

TSS: Now you lead one of the few publishing houses that put out books and magazines in Hungarian in Slovakia. All of them differ in one aspect or another, but they all compete for the readership of the 600,000-strong ethnic Hungarian minority. How is it different from the others, and what does the publishing house concentrate on?

LD: The Madách focuses on living literature, and we mostly publish books by ethnic Hungarian authors living in Slovakia. We also put out four periodicals, the Szabad Újság weekly, the Tücsök magazine for children, the Jó Gazda journal for farmers, and a literary monthly called Irodalmi Szemle. For decades I have also been interested in publishing daily newsß, because the smaller a minority is, the more it needs an up-to-date, flexible information channel. It is more important than anything else. The world has to learn who we are, how we live, and what we do.