THIRTY-FIVE years ago, on January 16 a student of the Charles University in Prague, Jan Palach, set himself on fire on Wenceslas square. Through this shocking act the 20-year-old man protested the August 1968 Soviet occupation of what was then Czechoslovakia.
Palach became the symbol of the first great resistance against the invasion, as well as the precursor of the 1989 Velvet Revolution. 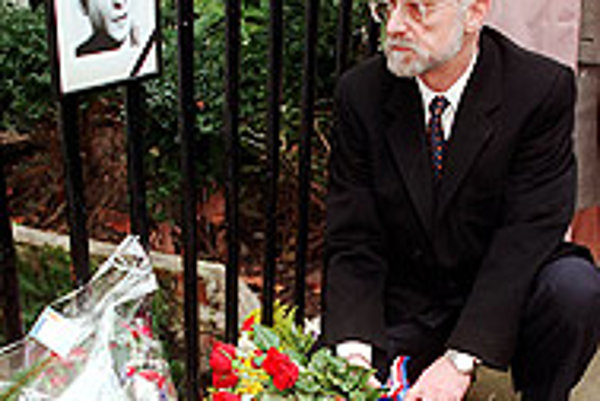 Font size:A-|A+  Comments disabled
THIRTY-FIVE years ago, on January 16 a student of the Charles University in Prague, Jan Palach, set himself on fire on Wenceslas square. Through this shocking act the 20-year-old man protested the August 1968 Soviet occupation of what was then Czechoslovakia.

Palach became the symbol of the first great resistance against the invasion, as well as the precursor of the 1989 Velvet Revolution.

Three days later, on January 19, 1969, he died of his burns. In Bratislava a solidarity demonstration was organised for his deed by Elena Letňanová, her husband Andrej, and Martin Bútora, who eventually became the Slovak ambassador to the United States. Letňanová captured the event in a text that was published in Literární noviny and Kultúrny život a few years ago. With the permission of the author, The Slovak Spectator is publishing that text in a slightly shortened version.

IT WAS late at night when Martin came over, bringing us the latest from Prague. Throwing his bag on the floor, he joined us as we sat at the table. There we remained until dawn, fists clenched, listening to his incredible news.

Even after he had left, I sat on, thinking abut his report of the young student who had poured gasoline over himself and, in flames, run through Wenceslas Square. Now his life was hanging in the balance as a result of burns to the head. The newspapers were referring to him as a "psychiatric case", which Martin explained as the government's unwillingness to raise the temperature in a city occupied by Russian tanks. The police had seized films, photos, and documents related to the invasion, so nobody who was not there would know what was going on.

Martin and Puto had gone into action, planning the next day's response. But a few phone calls soon convinced them that our friends and colleagues were afraid. So I convinced myself that I too must act, to show solidarity with this contemporary Jan Hus, our Galileo. My first thought was that I should play Beethoven's Appassionata live on television, to rouse our people.

When the news spread of Hus burning to death in 1415, the entire city gathered at Prague's main square under the statue of St Wenceslas, but that was not happening in our time. For me the history of honour and daring united these two Jans - Hus and Palach - and my life shifted into a new paradigm. History was pushing us into new, disturbing times.

January 19 was a day for our warmest coats. At the Bratislava university, in front of which the calm Danube flowed from Vienna, the entrances were covered by notices banning demonstrations, even gatherings. Instead, they spurred the opposite reaction. "That's just what we'll do," I thought to myself as I left the building where Bolshevik professors twisted the character of so many students. But there would be many who would join us.

That afternoon at 15:00, a handful of young and daring people gathered at the square dedicated to Czechoslovakia's first worker-president. Not knowing each other, we were all waiting for a definitive starting-point, for others to catch up to us. And that's when the two blue buses marked "Charter" entered the square.

The occupants were all men in the same blue clothing. The buses moved, then stopped, but no one got out. I grabbed Janko Sedal by the elbow: "They've come for us, they know about us, they'll follow our every step." Two buses were enough to spread fear. Janko broke off the heel of a loaf of bread and passed it to me.

We unfurled a mourning banner, Janko on one end, Andrej on the other, me holding up the middle. I unfolded a large photo of Jan Palach and held it against my old fur coat so it wouldn't blow away. It was as if he was trying to tell us something - not to think about ourselves so much. I admired him; he was greater than all of us put together. I wanted everyone to see his face, torn from a newspaper and flapping in the cold January wind.

We began to march, about 30 of us, mostly strangers to each other. When we'd gone about a hundred metres, one of the buses lumbered behind. It was getting on my nerves. "What's with them - are they joining us?" Janko shouted sarcastically, and pulled the banner tighter. He looked like a real pro, some kind of Russian anarchist with his long straight black hair, Rasputin eyes, a long beard like some hippie priest. And my husband, Andrej, a mathematician - the same, only better looking. It struck me we looked exactly like what president Gustav Husák had described as "anarchist pressure groups" in August of the previous year, after the Russians had invaded.

We carried on for another half-kilometre, to a street lined with student pubs. Since we could walk only three abreast, it was easy to look back and see how many were joining us. The blue bus pulled up onto a parallel street, and a fat police sergeant got out, followed by his men in blue uniforms, now carrying guns. They quickly moved into formation, surrounding us. It struck me as a scene from the theatre. The sergeant's orders resounded in my ears as he screamed into my face while everyone looked on, wondering what would happen next.

I had never before faced an armed guard of soldiers; that was something I had only seen in photographs. These soldiers looked like they would follow orders immediately and thoroughly. I began to tremble slightly. They had come to arrest us all, load us into their blue bus, and take us off somewhere. I forgot about our burnt martyr, and wanted to scream at them, ask them if they were not ashamed of their actions. I said nothing.

The commander gave his final order: "If you don't disperse, you will be arrested!"

As the command rang out over the hilly crossroads, I could feel my legs really start to shake. "Now they're going to jump us. In a second it's going to begin."

Our group stood still, ignoring the command; then people began to back away. We held the banner behind our backs so they couldn't tear it out of our hands. Across the road, another group started to form and marched to the next square leading to the Old Town Square and its ruined synagogue. Suddenly we all began to rush in that direction, leaving the sergeant shouting orders at no one. They would have to run too if they wanted to catch us.

By the time we got to Michael's Gate, our numbers had swelled. "They can't get in here with their blue bus," was our common thought, and indeed there was no sign of the police. I had a good feeling, with students adding to our numbers at every moment and our pace becoming more assured. There must have been two thousand of us as we moved closer to the university. "I'd march with you if I didn't have this pram to push," a young mother encouraged us. Two photographers were taking shots of our parades. I felt like some sort of spark plug; this was getting serious.

"Now or never," a strange new psychic quality was beginning to arise. In place of my fear, I was filled with a certainty mixed with defiance. I couldn't understand why anyone would be against us - Palach had torched himself for them too.

Strangers kept coming up to Andrej, Janko, and me. Janko had recently come back from three weeks of demonstrations in Paris - barricades, shooting, that cowardly De Gaulle refusing to step down, but reinforcing the army to face ten million striking students and workers. If the demons had been allowed to carry on, there would have been civil war, a cultural revolution instead of a screwed-down police state. Janko encouraged us to march as if we were in that barricaded city on the Seine. Again I felt the black banner brush against my old fur coat. "They cannot arrest us now. There are too many of us."

On a small side street in front of the Hotel Krym, a cordon of armed police, but with a different commander, was awaiting us. This commander was holding a megaphone, the better to deafen us with. The square was packed, including a new leaden reality: tanks in attack formation. Their gun barrels, I noticed, were larger than my head.

The commander gave his first order, which seemed to us absurd, since our 3,000-strong crowd had attained its own momentum. Reaching towards me, he attempted to tear the photo of Palach from my hands, but Andrej, furious, grabbed it back. Once again I held it to my breast.

"Out of the way," he cried at the officer, taking him aback. This furious face could punch him one. In a split second we were in motion; Andrej had outdone the commander, who never believed his lines could be broken. As we swept forward, the officer pushed through his defeated cordon and ran after us. The crowd hemmed him in.

A psychology student with a noble face read a sad farewell to Jan Palach from the steps of the school while water cannons were trained on him, on us all. Instinctively, I clutched my hands behind my back, scrunching the newspaper picture - if they break my fingers, I'll never play the piano again!

Still, the crowd moved forward, taking us up to the main doors of the university. I smoothed out the face in the photograph, feeling the tension in my back from expecting the water cannons to open up. I held the picture in front of me, waving it as if it were burning. "You have to carry it; now the meaning of the march has been accomplished," I encouraged myself.

Inside the building, eighteen or so of my schoolmates lay about on blankets and sleeping bags - the hunger strike had begun. A symbolic coffin, flanked by an honour guard, had been placed in the assembly hall, with candles burning at each end. The solemnity and the two candles lighting up the dark, silent hall filled with bodies seemed to sum up the ideals of the man who had burned himself in the street, for us. Two professors who had monitored our passage discreetly retreated outside to the corridor.

Outside, the arrests had begun. They grabbed anyone they wanted, starting with drunks and finishing with innocent onlookers. The next day, Radio Free Europe read out a list of some of those arrested.

Life was concentrated in those few great days when we risked death in the face of the arrogance of the powerful and their satellites, those who occupied our land.

Elena Letňanová lived as a political refugee in Rome, Italy from 1984 to 1985, then in Ohio, United States, where she was a chairperson of the Piano Division at the University of Dayton. Her articles on music have been published in several scientific journals. She returned to Bratislava in 1992 and currently teaches at the Slovak Technical University in Bratislava, Department of Foreign Languages and Social Sciences.