ALTHOUGH the ruling coalition has recently lost its parliamentary majority, deep divisions in the ranks of the opposition make a fall of the government in the weeks to come unlikely. However, Slovakia's political future remains difficult to forecast, which is taking a serious toll on the country's reputation among investors, according to experts.
The government headed by PM Mikuláš Dzurinda, which started its election term after the September 2002 general elections backed by 78 MPs, can only count on the votes of 68 parliamentarians of the 150-member assembly. 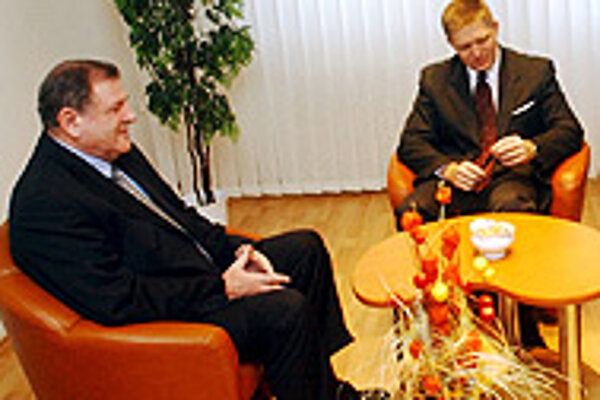 Font size:A-|A+0
ALTHOUGH the ruling coalition has recently lost its parliamentary majority, deep divisions in the ranks of the opposition make a fall of the government in the weeks to come unlikely. However, Slovakia's political future remains difficult to forecast, which is taking a serious toll on the country's reputation among investors, according to experts.

The government headed by PM Mikuláš Dzurinda, which started its election term after the September 2002 general elections backed by 78 MPs, can only count on the votes of 68 parliamentarians of the 150-member assembly.

The cabinet, whose support has been slipping throughout 2003, finally lost its majority after former Defence Minister Ivan Šimko announced on January 14 that his newly formed Free Forum party, seven MPs strong, was joining the opposition.

Šimko left the coalition and Dzurinda's Slovak Democratic and Christian Union after personal disputes with the PM, who forced him out of the seat of defence minister. He promised to remain committed to the government's program and vote for all proposals in line with that document.

The opposition met to discuss its reaction to the new political situation on January 15. The meeting was short and showed that opposition forces might find it hard to reach a compromise.

"The only thing we could agree on was that we don't agree on anything," said Vladimír Mečiar, head of the opposition party Movement for a Democratic Slovakia (HZDS), at a press conference following his talks with Smer boss Robert Fico and head of the Communist Party of Slovakia Jozef Ševc.

Fico, who stormed out of the meeting and the subsequent press conference, blamed the complete failure of the opposition's efforts to take a united stance on Mečiar, who he accused of collaborating with the government.

"Today's meeting fully proved that the cabinet of Mikuláš Dzurinda has the complete confidence of the HZDS," he said.

"The whole trick is who will be prime minister - Fico or Mečiar," said Ševc.

During the debate, Mečiar asked the two other opposition partners if they were ready to join or support a cabinet formed by the HZDS in the event that today's government is overthrown. HZDS' 26 MPs currently represent the largest parliamentary caucus.

Mečiar received a negative answer from Fico, who continued to insist that early elections were the only acceptable solution for his party.

Smer received 13.5 percent of the votes in the September 2002 elections and holds 25 seats in the legislature.

That figure would be more than twice as high if elections were held in the immediate future, according to surveys. An opinion poll done by the Public Opinion Research Institute of the Statistics Office, released on January 16, shows Fico, with 25.8 percent, would be the clear election winner if voting took place in January.

No party currently represented in the legislature other than Smer would improve its position in early elections compared with the results achieved in 2002.

The People's Union has nonetheless pledged to launch an initiative in parliament to oust the government.

The People's Union, a breakaway group of former HZDS members, has zero popular support. But it has teamed up with the non-parliamentary nationalist Slovak National Party, which is doing well in the polls.

The January 16 survey puts it in sixth place with over 7 percent of the vote, enough to make it into parliament.

However, both Mečiar and Šimko have said they will not vote for the proposal offered by the People's Union.

The developments at the opposition meeting led Fico to acknowledge that the government is not on its way out just yet.

"It seems there currently isn't sufficient drive to push Dzurinda's cabinet out. I think Dzurinda can just laugh," said Fico on January 19, suggesting parliamentarians would not replace the PM or shorten their own elections terms.

Smer remains determined to provoke early elections through a referendum on the topic, which it hopes will take place on April 3, at the same time as the first round of presidential elections.

It is widely expected that tying the plebiscite with presidential elections would increase turnout for the referendum, which has to draw over 50 percent of eligible voters to be valid.

Coalition parties have already asked their voters to ignore the referendum.

Although the results of a valid popular vote are not legally binding, most political representatives say they would respect the people's will and vote to shorten their terms in the event that a referendum was decided in favour of early elections.

Commentators also expect the simultaneous voting to improve the chances of President Rudolf Schuster, who has become a voice for discontent with the government, in the first of two rounds of presidential elections.

Smer has not ruled out calling on its supporters to vote for the current president.

Schuster has not yet confirmed whether he will again run for office, but will have to do so by the end of the month.

Mečiar, himself a likely contender in the presidential race, said the HZDS will not be active in the pre-referendum campaign if the plebiscite is held on April 3.

"The HZDS would have to fight on two fronts and that's impossible," said Mečiar, claiming his party does not have the financial and organisational resources to lead two campaigns at the same time.

Although Mečiar will not say the final word on his presidential candidacy until January 26, the party is determined to present its own candidate. HZDS party bodies have called on Mečiar to take up the challenge.

One thing all opposition parties agree on is holding talks with Šimko's Free Forum party. For the time being, the Free Forum maintains that it will only join the coalition or close a deal with the current ruling parties on supporting a minority government if PM Dzurinda leaves office.

Dzurinda's Slovak Democratic and Christian Union remains reluctant to accept this condition. PM Dzurinda, on the other hand, is unwilling to offer the Free Forum a seat in the cabinet in exchange for their support.

Other coalition parties say it is up to Dzurinda and Šimko to resolve the situation.

"I'm ready to take on the role of a mediator and to try to find peace between these two parties," Speaker of Parliament Pavol Hrušovský, head of the coalition party Christian Democratic Movement, told Slovak Radio.

So far, neither Dzurinda nor Šimko have seemed open to compromise.

The current situation is not helping Slovakia's image abroad. Neither the European Union nor NATO, of which Slovakia is set to become a member in the upcoming months, have expressed serious concerns about local developments or the possible change of governments.

However, investors are starting to have their doubts about the impact political instability may have on the on-going economic reforms, which have made Slovakia an attractive destination for foreign cash in the past months.