THE INTERIOR Ministry's plans to introduce specially trained officers to assist in keeping order in Roma settlements have raised protests and been called fascist. Some Roma leaders have dubbed the idea inhumane and discriminatory against the minority.
At the January 14 cabinet meeting, Interior Minister Vladimír Palko defended his plans when presenting an analysis on the special officers as a part of the cabinet's long-term strategy for solving problems in poor Roma communities in Slovakia. 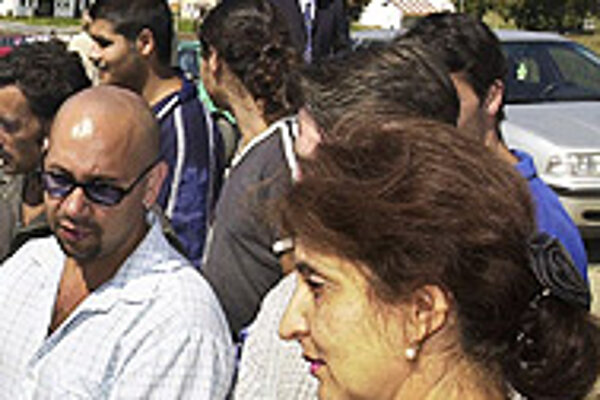 Font size:A-|A+0
THE INTERIOR Ministry's plans to introduce specially trained officers to assist in keeping order in Roma settlements have raised protests and been called fascist. Some Roma leaders have dubbed the idea inhumane and discriminatory against the minority.

At the January 14 cabinet meeting, Interior Minister Vladimír Palko defended his plans when presenting an analysis on the special officers as a part of the cabinet's long-term strategy for solving problems in poor Roma communities in Slovakia.

According to informed estimates, there are 500,000 Roma in Slovakia and many of them live in rundown settlements in the eastern part of the country. Roma are largely undereducated and many live in poverty without proper housing. In some Roma settlements, unemployment is as high as 100 percent.

The officers would, according to Interior Ministry spokesman Boris Ažaltovič, work in the Roma community, especially in the Roma settlements, to "solve petty quarrels and possible transgressions against the law, and help to prevent illegal activities".

Some Roma settlements are also fighting problems with loan sharking, and the new officers would help address this issue as well.

According to the Interior Ministry's analysis, the success of the specialised officers, who are scheduled to start working by the end of 2007, depends on "at least partial acceptance by the Roma community of [the creation of] such positions in the police".

Initial reactions from Roma leaders showed that achieving this acceptance could prove a tough job.

"This is totally undemocratic and inhumane and it reminds us of fascist practices," said Alexander Patkoló, head of the Slovak Roma Initiative.

Ladislav Fízik, who leads the Roma Parliament, a union of several Roma parties, said: "I don't agree with the plan as described [by Interior Ministry officials]. Nobody knows what a specialist police officer would be and I am afraid that the Roma would not accept them."

"We would prefer that skilled Roma were picked to work for the police because they would be more accepted by the community," Fízik said.

But Klára Orgovánová, the cabinet plenipotentiary for Roma communities, disagreed with the statements and said that she would be the first to protest against a project that would include elements of discrimination against the Roma.

The project of the special officers will be divided into three stages that will also involve several NGOs that deal with Roma issues and minority rights, such as the Inforoma foundation, Citizen and Democracy, and the Slovak Helsinki Committee.

Šarlota Pufflerová from the Citizen and Democracy NGO told The Slovak Spectator that the ministry had not officially contacted her organisation but added that they would be interested in helping to carry out the plan.

"We plan to prepare an educational project for the police and the Roma communities and we would gladly participate in the ministry's project," Pufflerová said.

She pointed out, however, that the initially negative reactions to the idea of special officers was possibly due to the negative connotation that the word specialist can have among the Roma.

"They feel as if something was being plotted against them. Perhaps if the idea was better communicated and the new policemen were called Roma cooperation officers or something in that sense, it would help make [the plan] acceptable to the Roma," she said.

Ažaltovič from the ministry insisted that the "Roma need not fear any misuse," and he said that the plan may be adjusted according to the advice the ministry wants to get from NGOs and Roma organisations.

"We plan to introduce the officers no earlier than 2007 so there is a lot of time to prepare everything so that Roma don't feel that this is aimed against them," Ažaltovič said on January 19.

He explained that the project is divided into three stages and that the ministry was only at the start of the first stage.

"We are aware that the officers cannot be successful without being fully or at least partially accepted by the Roma," he said.

"We hope that this plan can improve communication between the police and the Roma in settlements," Ažaltovič added.

Fízik from the Roma parliament noted, however, that to achieve better communication, police and the ministry must talk to the Roma communities and their leaders so that a more precise plan for assisting Roma can be put together.

"We want to contact the Interior Minister and present him with our suggestions. We think that it would be best if qualified Roma could become the officers because they are closer to the community and understand their needs," he said.

According to Ažaltovič, all applicants will be welcome to run for the posts once specific criteria are prepared.