AFTER months of disagreement and fruitless negotiations, Slovak ruling parties finally agreed on Slovakia's first representative to the European Commission (EC) and the new head of the state's screening authority, the National Security Office (NBÚ). 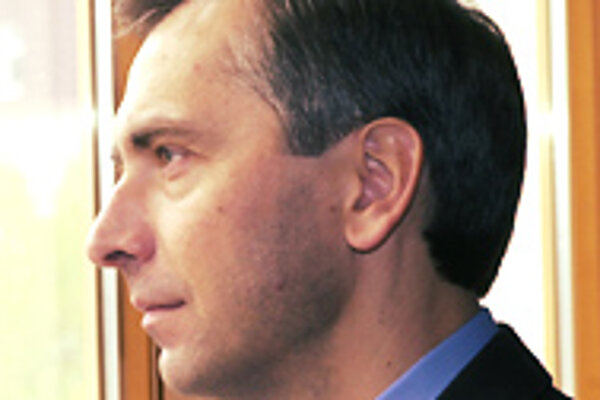 Christian Democrat (KDH) Ján Figeľ, who for years led the Slovak team of negotiators for the country's EU entry, won the cabinet's support to become a new member of the commission. Each of the 10 acceding states must submit their candidates for approval to EC head Romano Prodi.

According to the KDH website, Figeľ, who just turned 44, was born in the eastern Slovak village of Čaklovo in the Vranov nad Topľou district. He co-founded the KDH in 1992 and has been in top politics ever since. He is currently the head of the parliamentary foreign committee.

He was picked over the Coca Cola manager Ivan Štefanec who was a candidate of the Slovak Democratic and Christian Union.

Until the day before the ruling parties forwarded Figeľ, the outcome of the agreement was unclear. Figeľ appeared the likely choice only after the board of chairmen of the ruling party New Citizen's Alliance (ANO) asked the party's members to support Figeľ.

The party officials said that Figeľ's political experience persuaded them to back the Christian Democrat over Štefanec.

But speculations soon appeared that the ANO agreed on Figeľ only because it wanted the KDH to back their nominee to the top post at the security office, Aurel Ugor, who was also approved by the ruling parties.

The KDH as well as the ANO rejected the idea that such a political trade-off had taken place.

"In Slovakia Figeľ has the greatest moral right to the post of commissioner," said Pavol Minárik, KDH deputy chairman.

"I appreciate the trust of the ruling coalition," Figeľ said to the private news agency SITA on January 27.

It took four months and seven candidates for the ruling parties to manage to agree on a new boss for the NBÚ.

Mojžiš had to leave the NBÚ after Dzurinda said he had completely lost trust in the official. In a deposition made to the prosecutor and later leaked to the press, Dzurinda suggested that Mojžiš was linked to an alleged group that was working against the interest of the state and trying to get hold of lucrative state orders.

Dzurinda never directly confirmed the authenticity of the deposition.

The allegations about the group are being investigated but no concrete charges have yet been laid. Unlike some of the previously unsuccessful candidates for the NBÚ post, Ugor, who works for military intelligence, was virtually unknown to the public until a few days ago.

Even now information about him remains scarce.

The ANO, who proposed the candidate, only said that Ugor spoke English and he passed a security screening that entitled him to access top-secret materials.

As agreed at the coalition council meeting, the cabinet ministers approved both officials to their posts at a session on January 28.