MICROSOFT magnate Bill Gates agreed with the Ministry of Education to sponsor the development of information technologies in Slovak schools.
Microsoft Slovakia general director Róbert Šimončič, Education Minister Martin Fronc, and Microsoft's chief software architect signed a memorandum of understanding between the software giant and Slovakia on January 27 in Bratislava. 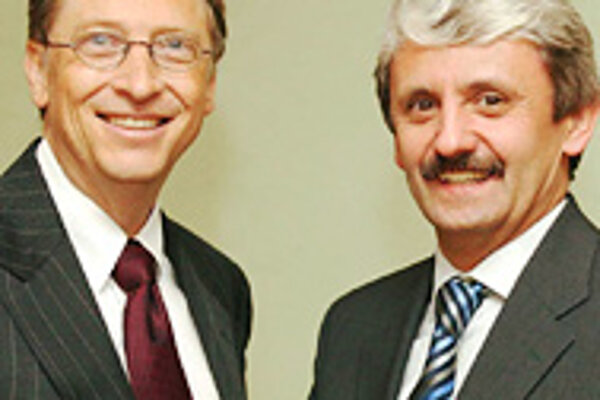 Font size:A-|A+0
MICROSOFT magnate Bill Gates agreed with the Ministry of Education to sponsor the development of information technologies in Slovak schools.

As a result, Slovakia has become the 13th country to be part of the Partners in Learning programme, which would bring Slovak schools closer to the everyday use of information technologies.

Partners in Learning is a worldwide Microsoft initiative to provide an initial investment of software and more than $250 million (€205.44 million) in cash grants to deliver tailored curriculum development, training in information and communication skills, technical support, and research funds and resources to students and teachers.

The project has so far been run in other European countries in association with government institutions and local firms.

"We would like to use this cooperation in three areas: education, consulting, and the establishment of research centres," Prime Minister Mikuláš Dzurinda told journalists.

"I believe that this [programme] will mean a step forward for the Slovak education system," Róbert Šimončič said.

The Fresh Start for Donated Computers programme was set up specifically for primary and secondary institutions to help eliminate confusion about whether donated personal computers have a legitimate operating system license.

The programme provides license documentation and Windows installation at no cost for an original Windows operating system on donated personal computers that meet qualifications.

During the next five years in Slovakia and the neighbouring Czech Republic, Microsoft will directly sponsor projects with an additional fund of Sk37 million (€909,612), the memorandum reads.

The Partners in Learning School Agreement will allow schools in the poorest regions of Slovakia and those with the highest unemployment rates to run Windows XP free of charge, and Microsoft Office XP Professional at almost no cost.

This benefit, according to the memorandum, will be offered to 15 percent of Slovak schools.

The Germany-based Deutsche Telekom, the majority stockholder of Slovak Telecom, will provide computers as a gift to Slovak schools.

Fronc stressed that this does not mean that only software from Microsoft could be run on the computers, all of which will be equipped with high-speed ADSL lines.

Dzurinda said that by the end of this year, every school in Slovakia would have access to the internet. However, he added, this will require a lot of effort.

Gates referred to these plans as ambitious educational goals.

"Microsoft will provide its very best software, and will help out with the significant training challenges the prime minister mentioned," he added.

Fronc told The Slovak Spectator that about 45 percent of all Slovak schools currently have access to the Internet.

Over 33 percent of all computers sold on the Slovak market operate on illegal systems, an international anti-piracy outfit revealed recently. Commenting on these statistics, Gates said he was aware that "basic steps have been taken" in Slovakia to fight this phenomenon.

"Here in Slovakia we are seeing a retreat of piracy over time; we look forward to more progress in that area. I don't think we will see anything dramatic. The primary place in which we see improvement is in large businesses," Gates told journalists.