From tennis courts to galleries

CZECHOSLOVAK tennis legend Jan Kukal has begun the new year very actively, but in the field of art, not sport.
During the recent International Travel Fair at the large Incheba exhibition hall in Bratislava, he opened a new gallery - Art Gallery of Incheba Bratislava. Its first exhibition, which consists of two parts - Homage to Pablo Picasso and Returns - offers over a hundred paintings and forty sculptures created by Slovak and Czech artists. Other exhibits scheduled to take place there by the end of this year are in the preparation phase (see box at the end of this page). 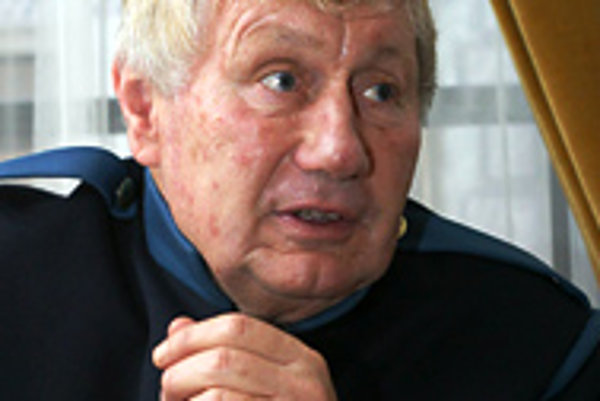 CZECHOSLOVAK tennis legend Jan Kukal has begun the new year very actively, but in the field of art, not sport.

During the recent International Travel Fair at the large Incheba exhibition hall in Bratislava, he opened a new gallery - Art Gallery of Incheba Bratislava. Its first exhibition, which consists of two parts - Homage to Pablo Picasso and Returns - offers over a hundred paintings and forty sculptures created by Slovak and Czech artists. Other exhibits scheduled to take place there by the end of this year are in the preparation phase (see box at the end of this page).

With the gallery up and running, Kukal's artistic activities have not ceased. Last Thursday, January 28, he opened his 10th exhibition, Homage to Josef Lada, and in May he plans to introduce the best works of renowned Slovak graphic artist Vincent Hložník.

"I should be in Australia right now. This is the first time I am not - because of this exhibition," said Kukal, who has been in professional tennis for 40 years. He first organised an exhibition 26 years ago, in Salzburg. It presented works of Slovak artist Milan Paštéka, his favourite. He plans to export other leading Slovak artists abroad, such as Rudolf Fila, Karol Barón, Marián Čunderlík, and Hložník, but this time each will be accompanied by a young rising talent.

The Slovak Spectator met with Kukal and spoke about his activities shortly before the Lada exhibition opened.

The Slovak Spectator (TSS): During the recent International Travel Fair at the Incheba in Bratislava, you opened a new and large gallery...

Jan Kukal (JK): It's definitely the largest art gallery in Slovakia. The area covers around 3,000 square metres, on two floors. It's like a palace. It is very well situated, near the [Bratislava] centre with a view of the Bratislava Castle. It's also close to the Austrian border. So, in the future we also plan to do international exhibitions, bringing famous artists from abroad to Bratislava.

TSS: What's the reason for opening it in Incheba?

JK: The general director of Incheba, Alexander Rosin, asked me to do it. It's a great honour for me to have this opportunity because the problem with official galleries is that it takes them a long time [to get started]. And especially at a place such as Incheba, which covers 37,000 metres, and runs 70 fairs a year that are visited by 50-60,000 spectators... We want to show art to people that normally don't go to galleries.

[The gallery] is something [Incheba] has never done before. They have never done anything in the arts. The official opening of the gallery's first exhibition [part of which is currently running] will be at the beginning of March. It will feature five different exhibitions by the great and famous artists Marián Čunderlík, Agneša Sigetová, Theodor Lugs, Daniel Bidelnica and his wife Mária Bidelnicová, as well as Rudolf Sikora and his student Dan Meluzin, who is inspired by pop art [Meluzin recently exhibited at Bratislava SPP Gallery; see The Slovak Spectator Vol 10, No 2].

TSS: What about the gallery's other plans?

JK: By the end of this year, we plan to exhibit all 20 monumental canvases of the Slavic Epic by [Czech art nouveau painter] Alphons Mucha, a work that has never left the Czech Republic. The Brno Gallery has also promised us that we can exhibit their 600 film posters as an Homage to Hollywood.

TSS: How feasible is the Mucha project?

JK: It's not easy to get these works. But the negotiations look promising at the moment. We already presented one of these 20 large canvases here at an exhibition that took place at Pállfy Palace last year, which was visited by a record number of 26,000 visitors.

Mucha also holds a world record in number of spectators, when 12 of his Slavic Epic works were exhibited in New York in 1928. Around 650,000 people visited the exhibition, a record that has never been beaten. But this beautiful work has never been exhibited as a whole anywhere in the world, which is really unfair to Mucha.

TSS: I have heard you mention the name of Pablo Picasso in connection with other artists whose exhibitions you are preparing. Also, your first exhibition in Incheba is dedicated to this genius. Why?

JK: Because Picasso was a genius. And there are very few geniuses in the history of art. He is more influential than any other artist. There were periods at painting schools around the world completely devoted to the cubist style. And the second largest centre of cubist painters, after Paris, was Prague. And he is still influencing a number of artists.

TSS: Watching you, it seems like organising an exhibition in Slovakia is not too difficult.

JK: No, it's difficult everywhere. It's a lot of work. If I don't have anything interesting to show, I'm not going to do it. The biggest challenge for me now is the [gallery at the] Incheba hall - because it's not easy to start something. I hope to have enough time to turn it into an interesting venue.

TSS: How do you decide which artists to exhibit?

JK: Most of them I know personally, some are my favourite artists, and I also have advisers, curators, and artists who help me decide. I'm also learning to recognise the difference between a good and a bad picture, which is not easy. I'm not an art expert. I just like to do it. And it's great fun.

TSS: Why do most of the artists seem to be of Czech origin?

JK: Actually most of them are Slovak. I'm a Czech living in Slovakia. I like these two nations, as I have been representing them for many years.