Something new for Petrov 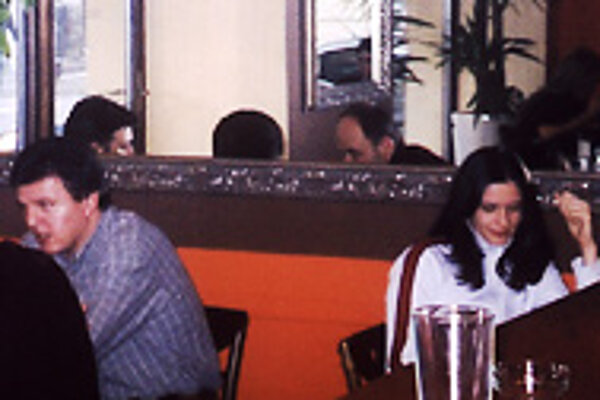 LUCKILY, this restaurant did not change its menu when it recently redid its interior and changed names. Though it has been open for more than 10 years, the new attitude gives some opportunity to write a review and others an excuse to go and have a taste.

Once called U Petrova (at Petrov's), the restaurant is now called Santé. Lest you forget, it is written in huge letters embossed on the café's ceiling. This is perhaps the biggest example of the new, forward image. Secondly, house seems to be the music of choice. Meanwhile, the walls are painted in an orange that stands up for itself. To point out the owner's attention to detail, even the street name posted outside on this street-corner spot is written in the font used for the restaurant's name on the awning.

All this would be overpowering if it were not for the interior's somewhat dark lighting and the marble tabletops and dark wood chairs that keep it in check. The restaurant's small size, which fits only seven café-style tables and a short bar, also helps compliment the posturing with character. Three large mirrors in heavy decorative frames multiply the space and the Mediterranean plants in the windows, stretching the restaurant into something larger, but also more intimate. Perhaps this is because you have ample opportunity to peek at the rest of the chic crowd that fills the chairs during lunch and dinner.

To place Santé among Bratislava's glitzy nouveaux-cuisine restaurants is to overlook its young, relaxed personality. It is also not quite so expensive. Soups like minestrone, tomato with cheese, and potato with mushrooms run around Sk55, and you will not regret having one. Appetizers from the "delicacies" section, like forbidden fruit, cost a bit more. For entrees, most meat groups are represented, as well as an all-fried "unhealthy" section, pasta, and a selection of skewers, including an all-vegetable choice.

On the pasta end, the penne con panna's (Sk129) cream sauce is delicate and not too thick. The pesto is even more pleasing and it is not a mistake to pay a little bit more for the pesto extra, which comes mixed with olive and artichoke. The server, Peter, is friendly and attentive.

He seems to be very fond of the restaurant, even periodically airing it out by opening the door. He also claims the restaurant has the best steak in town, which may be credible. For example, the steak with mushroom caramel sauce, is, in fact, sweet and worth the risk. A side of spiced potatoes from the grill is also recommended.

He assured us that his name had nothing to do with the restaurant's old name; The name Petrov is a Russian surname.

"The restaurant was old, we wanted something new," the waiter Peter simply explained. A straightforward wish successfully fulfilled.