TWELVE men have announced their candidacies to run for the position of Slovak president. Two contestants withheld their decisions until the very last moment before the January 30 deadline, attracting media attention for the last several weeks.
The last two big names for the April 3 elections are Vladimír Mečiar, the controversial ex-PM and chairman of the Movement for a Democratic Slovakia (HZDS) party, and President Rudolf Schuster, who is among the top four candidates, according to analysts as well as popular polls. 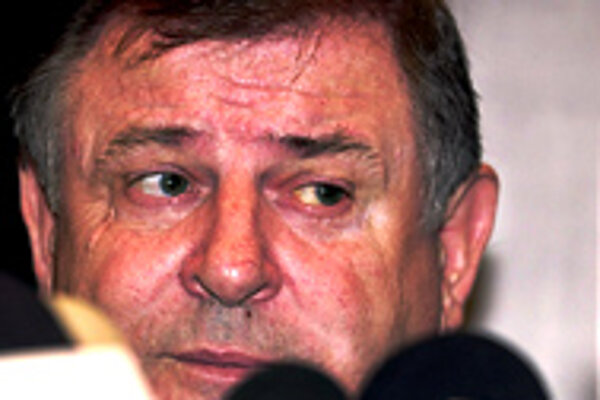 Font size:A-|A+0
TWELVE men have announced their candidacies to run for the position of Slovak president. Two contestants withheld their decisions until the very last moment before the January 30 deadline, attracting media attention for the last several weeks.

The last two big names for the April 3 elections are Vladimír Mečiar, the controversial ex-PM and chairman of the Movement for a Democratic Slovakia (HZDS) party, and President Rudolf Schuster, who is among the top four candidates, according to analysts as well as popular polls.

Apart from Mečiar and Schuster, the top dogs in the presidential race include Foreign Minister Eduard Kukan and Ivan Gašparovič, former speaker of parliament and a one-time ally of Mečiar who left the HZDS last year to found the Movement for Democracy party.

Unlike the 1999 presidential elections, only men are running for the presidential seat this year. Last time, Magda Vášáryová was among the 10 candidates [see box right]. The current ambassador to Poland, she finished third in the first round of the last elections despite scoring under 10 percent.

Of the four leaders of the opinion polls, Kukan is the most popular - despite the plunge in popularity of his party, the Slovak Democratic and Christian Union, over the last half year. Kukan's strong position is seen as a result of his positive impact on Slovakia's foreign policy and his diplomatic skills.

In the most recent opinion poll, carried out in January 2004 by the Statistics Office, Kukan scored 23.8 percent of the vote, followed by Mečiar with 17.4 percent, and Schuster with 16.7 percent. Gašparovič came in fourth with 12.7 percent. The other candidates [see list left] scored far below 10 percent.

The incumbent, Schuster, is the oldest of all the candidates at 70, while the youngest man running is Jozef Kalman, a former HZDS member who is 52 years old.

The coming elections will be the second direct vote for president since independence. Observers are convinced that the first round on April 3 will not bring a victor. According to the law, a candidate must score more than 50 percent of the votes to win, which analysts agree is unlikely.

If this is the case, the second round will then take place on April 17 between the two best candidates from the first round. He who scores more votes wins the seat.

Dozens of journalists attended the January 30 press briefings of Mečiar and Schuster despite observers' predictions weeks ago that the two would run. Most saw their consistent refusal to reveal their decisions sooner as part of a plan to attract media attention.

Both Schuster and Mečiar stressed at their press conferences that they were running either because the voters or their party colleagues appealed to them to run.

Mečiar, who has never publicly explained the sources of his estimated Sk40 million (€990,000), pledged to settle all of his commitments, yet would not tell where he got the money.

"So that there are no doubts about my impartiality in the event I am elected for president, I bind myself to settle all personal matters so that I have no commitments towards anyone except the citizens of the Slovak Republic and God above us," Mečiar said at his press briefing.

He added: "I entered the race with all my negatives and positives and I do not intend to stylise myself as anything [other than who I am]. I am a bit more considerate but I will try to erase neither the negative nor the positive sides of who I was in the past."

According to Mečiar, should he not win the chance, he is betting that Schuster and Kukan will make it to the second round.

Schuster, meanwhile, would not comment on the other candidates, and only said that he respected all of them.

He insisted that the citizens who asked him to run prompted his candidacy.

"It would be disrespectful of me not to listen to the voices of those who appealed to me to run for the post again," Schuster said.

He also said that he was in better physical shape than he had been several years ago. "Those who do not trust me should come and see me at the tennis courts," he said.

Schuster's health was in severe condition in the summer of 2000 when he had to be taken to Austria after nearly dying in a Bratislava hospital following a perforated colon operation.

The presidential candidates have a Sk4 million (€99,000) limit for the campaign, which officially starts 15 days ahead of the elections, in mid March, and ends 42 hours before the vote.

According to the law, private media can participate in the election campaign and the public broadcasters Slovak Television and Slovak Radio must provide equal airtime to every candidate.

The presidential term lasts five years. The same president can be elected a maximum of twice in a row, but is entitled to run again later.

* Vladimír Mečiar; chairman of the Movement for a Democratic Slovakia

* Ivan Gašparovič; chairman of the Movement for Democracy

A REVIEW OF THE 1999 ELECTIONS

THE FIRST direct presidential elections in Slovakia were held in May 1999 and 10 candidates ran for the post. Among them was one woman, current ambassador to Poland Magda Vašáryová, the first to run for the position.

Other candidates included the previous president, Michal Kováč, who gave up his candidacy due to the low support he scored in opinion polls shortly before the elections.

The vote was attended by 74 percent of the voters, who were enthusiastic to be able to choose their president for the first time since the fall of communism.

The first round brought no winner, but Vladimír Mečiar and Rudolf Schuster were the strongest two candidates, winning 37.2 and 47.4 percent, respectively.

Schuster, who had been the head of the ruling Party of Civic Understanding, ran as the common candidate of the ruling parties on his ability to oppose the popular Mečiar.

Many observers worried about Schuster's leadership qualities and his communist past, yet they admitted that he was the only man who could be a strong rival to Mečiar.

As soon as it was clear that Mečiar and Schuster had made it to the second round, the election was dubbed "a vote of the lesser evil".

Schuster outscored Mečiar in the final round with 57.2 percent.