SLOVAK deputies and future Members of European Parliament (MEPs) are not only irritated by the fact that they will earn one twelfth of what their Italian colleagues do, they also want the EU, not Slovak taxpayers, to pay their monthly salaries.
Because the foreign ministers of current EU member states failed to agree on a new system that would have given all MEPs a set salary of over €8,600 per month, paid from the EU budget, new Slovak members will receive Sk36,000 (€881) 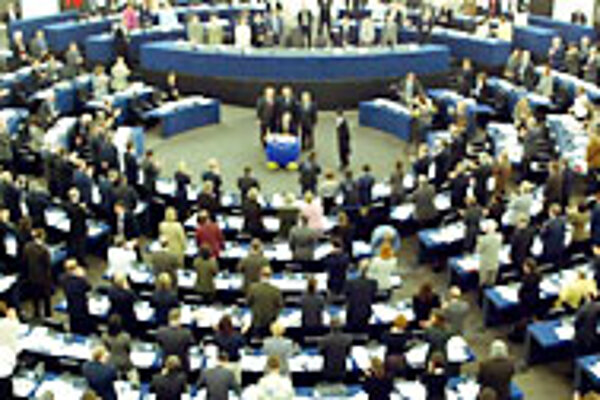 Font size:A-|A+0
SLOVAK deputies and future Members of European Parliament (MEPs) are not only irritated by the fact that they will earn one twelfth of what their Italian colleagues do, they also want the EU, not Slovak taxpayers, to pay their monthly salaries.

Because the foreign ministers of current EU member states failed to agree on a new system that would have given all MEPs a set salary of over €8,600 per month, paid from the EU budget, new Slovak members will receive Sk36,000 (€881)

Following the vote on January 26, Foreign Minister Eduard Kukan said that Finance Minister Ivan Mikloš "will not be pleased" with the decision.

Kukan also maintains that representatives of Slovakia deserve to be paid at the same rate as their fellow MEPs.

"If Slovak Members of European Parliament are expected to do the same work as their colleagues [from current EU-member states], they should have a similar basic pay," Gyula Bárdos, leader of the parliamentary caucus of the Hungarian Coalition Party, told The Slovak Spectator.

He added that financial sources for the salaries should be found in the budget of the EU, rather than the Slovak state budget.

Head of the parliamentary financial and budgetary committee Pál Farkas shares his fellow MP's concerns. In an interview with The Slovak Spectator, he said he was unhappy that MEPs are to be paid out of their respective state budgets.

"Slovak Members of European Parliament should get paid from the resources of the EU, not Slovakia. I know this is only a temporary solution, but it is not a good one," he said.

Monika Beňová, leader on the European Parliament candidate list of the opposition party Smer and head of the parliamentary integration committee, has also raised objections to the move by the EU foreign ministers.

She said it would be unfair for the 14 Slovak MEPs to earn much less than other European parliamentarians. Approximately €4,000 per month would be adequate, she maintains. Otherwise, Beňová thinks, Slovak parliamentarians will be second-rate members.

"You can just imagine how their colleagues will look at them," she told the Hungarian-language daily Új Szó.

"It is an absolutely ridiculous sum," said Jozef Heriban, one of the Slovak observers in the European Parliament. The delegate from the governing party the New Citizen's Alliance underscored that everyday expenditures are much higher in Brussels than in Bratislava.

Currently, MEPs are paid the same as their national counterparts, leading to huge discrepancies. This phenomenon is to become even more extreme when the new, poorer member states join on May 1. The Italians are the best paid at around €11,000 a month. That is four times what their Spanish colleagues earn, and twelve times the €881 their Slovak colleagues will earn. Hungarian MEPs will earn €800 a month, while Lithuanian deputies can expect to take home around €350.

"It is not [only] future Members of European Parliament from the new member states who are concerned with salary changes; some current deputies are also disturbed by the discrepancies in their pay," Farkas said.

It is a pity that ministers failed to reach an agreement, but it is hardly surprising when such a large pay increase was proposed for many."

European Parliament President Pat Cox of Ireland called the ministerial decision "very disappointing". Cox has made pay reform a key issue of his presidency, and had backed a €102,000-a-year salary for members.

Salary changes will be dealt with again in the Ministerial Council in coming months. Farkas hopes that an agreement can be reached within the EU. However, he said it is unlikely to happen prior to the next European Parliament elections, scheduled for June. Asked if he expected the EU to reach an agreement within a year, Farkas replied, "I am skeptical".