A STRANGE figure wearing loud Hawaiian shirts arrived in Slovakia in mid January, stopping adolescents on the streets and in the schools of Bratislava and talking to them about sex.
John Chittick, or Dr John, as he likes to be called, is an HIV/AIDS educator and, in his own words, "a kind of motivational speaker". The 55-year-old man has visited over 60 countries on a series of educational world tours supported by TeenAIDS-PeerCorps, a non-profit organisation that he founded in 1997. 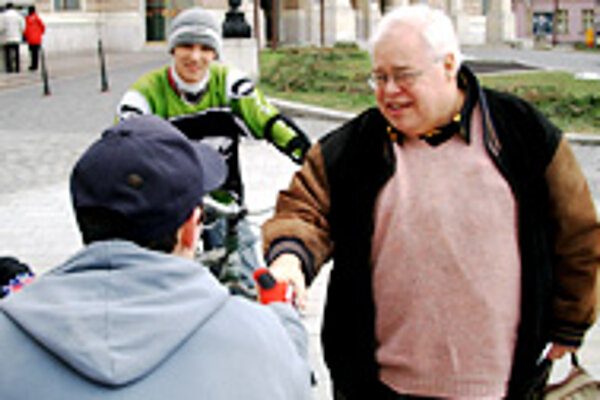 Font size:A-|A+  Comments disabled
A STRANGE figure wearing loud Hawaiian shirts arrived in Slovakia in mid January, stopping adolescents on the streets and in the schools of Bratislava and talking to them about sex.

John Chittick, or Dr John, as he likes to be called, is an HIV/AIDS educator and, in his own words, "a kind of motivational speaker". The 55-year-old man has visited over 60 countries on a series of educational world tours supported by TeenAIDS-PeerCorps, a non-profit organisation that he founded in 1997.

His primary goal, he says, is to empower adolescents to teach other members of their generation about HIV. Spreading information in this way, Dr John's educational programme attempts to copy the disease it hopes to stop.

"HIV is growing exponentially among the 13 to 25 age group, and I hope that the message I deliver to these young people will spread from one friend to another in a similar way. Adolescents talk to each other all the time and they spread the message much better than I can," Dr John said.

His educational method takes several different forms, including delivering lectures to schools, taking youth on his travels for training stints lasting as long as two weeks, and conducting brief conversations at random with youth in the street. He estimates that, not including the talks in the street, he has met and talked to 150,000 youth, give or take 20,000.

In all cases, he offers those he meets a business card with his name on one side and basic HIV prevention information on the other.

As part of his effort to reach adolescents, Dr John tries to be something other than an authority figure. The Hawaiian shirts, of which he has a collection of about 50, give him the look. When he talks, he uses a combination of disarming humour and intuition to be inquisitive yet harmless.

"Could you use the word 'handsome' to describe me in your article?" he asked this reporter.

Perhaps most importantly, he does not try to reform the adolescents he speaks to.

"I do not show up and say 'I am here to save you'," he explained. "Instead, I ask the young people I work with to help me. I ask them to save a friend - everybody loves someone and wants to save them from harm."

Dr John and his agenda are at times unwelcome. In Cuba he was jailed, and in China he was tailed by police. Before coming to Slovakia he was in Egypt, travelling on a tourist visa and without contact with the government. He uses this method partly due to his occasionally spontaneous travel schedule, partly because some governments interfere too much with his itinerary.

"I very much prefer to work with private education groups or with schools directly," he said, adding that to set up lectures he often calls schools or even shows up at their doors, offering his immediate service.

His visit to Slovakia was completely unplanned and lasted only a few days. Yet, on the day of this interview, he had already visited the Dunajská, Hubeného, and Palackého high schools, and was getting ready for a night on the town at the Duna nightclub with some students he had befriended earlier. He was not sure whether he would next head to Ukraine, Estonia, or England.

Dr John chose to work on a worldwide scale rather than focus on just one country or region because he believes the latest trend in HIV infection is a global one.

"People will say that HIV is Africa's problem, or some other region's problem. But I think that the global generation of adolescents is at risk. This is not a regional problem, it is a generational one."

Dr John also intends to write a book about the global spread of HIV among youth, drawing on his travel experiences and his previous research at Harvard University. For his PhD thesis at the US university, Dr John wrote a 600-page study of the HIV epidemic among adolescents. After finishing his degree he became convinced that the problem required a more active approach and he invested all he had in TeenAIDS and his first tour.

The success of Dr John's work is difficult to quantify, as are the results of many education and empowerment programmes. His ability to spread the communicative virus can be seen in his repeated visits to countries like Vietnam, Cambodia, and Austria - first at the request of those he has trained, then at the request of their younger brothers and sisters. Leading a one-man show, however, has worn him out. "My website makes it look like I have a whole organisation, but actually it's just me," Dr John explains.

"I'm going to end my travelling soon - I've been living out of a suitcase for five years, which is tiring," he says, adding "I love my mother, and I want to go home to see her."