EVER listened to a garrulous creek, felt the earthy ground, and smelled the blossoming trees in a painting? Adults should have no problem.
But how does one make children mobilise their senses and simultaneously appreciate a unique work of art?
Landgame, the latest in a series of playful exhibitions about art running at the Bibiana art house in Bratislava, aims to do just that. With reproductions of original paintings from the realist period up to the present time, it tries to introduce the landscape-painting genre to children through various interactive techniques. 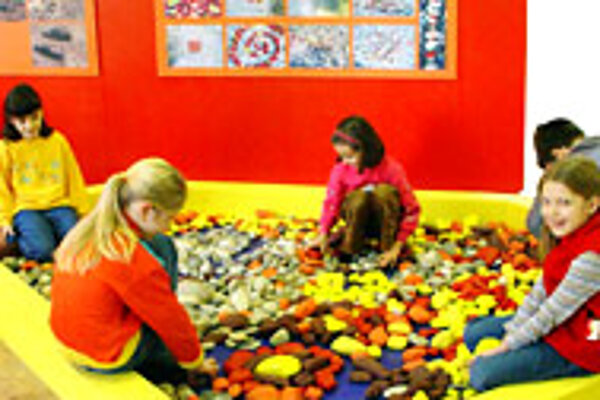 Font size:A-|A+  Comments disabled
EVER listened to a garrulous creek, felt the earthy ground, and smelled the blossoming trees in a painting? Adults should have no problem.

But how does one make children mobilise their senses and simultaneously appreciate a unique work of art?

Landgame, the latest in a series of playful exhibitions about art running at the Bibiana art house in Bratislava, aims to do just that. With reproductions of original paintings from the realist period up to the present time, it tries to introduce the landscape-painting genre to children through various interactive techniques.

"It's very difficult to approach children [with art] these days, so we try to do it through games, experiences, senses, and dialogues," said Katarína Kosánová, one of the exhibition's organisors.

The landscape is understood in the project as a phenomenon that influences people, and vice versa. Children at the exhibition advance from one room to another, where they can literally touch, smell, and listen to the pictures, in order to better realise their message and their uniqueness through the atmosphere they emanate.

In one room, for example, children are asked to put together a puzzle of a water reflection from Claude Monet's Boats at Argenteuil. In the room entitled Traces in a Landscape, they enter into the given environment, leaving their "traces" behind. In the Laboratory of Elements they play with a picture's atmosphere, such as adding a rainbow to Vincent van Gogh's gloomy Wheat Field.

Or in the exhibition's only dark room they discover different images of the Sun.

"Since the reproductions of the paintings are taken from various artists, the children can see different styles, from which they can find the one that best suits them," Kosánová said. Asked to create works gradually throughout the exhibition, they can fully develop their talents at its end: by painting onto and filling in a pale copy of a photograph of a Bratislava street.

Designed by Saša Petrovická and Saša Fischerová with the artistic help of Soňa Sadilková, the Landgame exhibition is open until the end of April 2004 for Slovak and non-Slovak children alike, aged between 4 and 12.

"When the children enter the exhibition, they are immediately dragged in by each of the exhibits. It's so clear what they should do there that it doesn't matter what language they speak," said Kosánová, who, if necessary, can become an English guide.

"The only problem is to go through the exhibition all at once," she warns. "That would be quite a big mouthful."

Mysterious Messages
The exhibition surveys something that people know well, but do not understand: the most famous pictographs scattered around the world. Since they strongly resemble children's drawings, should it not be they who decipher their meanings? Connected by a rainbow bridge and inserted into a world colourfully painted by Ivan Popovič, the playful expedition lasts until March 28.

Colourful Land
The third part of the series titled Dialogues on Tolerance focuses on the minority living in the hilly terrain of northeastern Slovakia: the Ruthenians. The ethnic group, which reads and writes in Cyrillic, is mainly famous for its unique wooden church architecture (see article page 12).

Children get to explore their cultural heritage by directly stepping into a landscape painting by Dezider Milly, a world-renowned artist and a Ruthenian.

Once in, they can enter specifically Ruthenian architecture - churches, schools, beehives, and houses - while listening to the authentic natural sounds and music of the region.

The first two parts of this series were devoted to the Roma and Jewish ethnicities.

"Each theme requires a special approach, as we must find the right key to open up the particular ethnic group's way of living and thinking. We've always tried to look at the theme through children's eyes. For the Roma we chose the key to be their music and paintings of children living in settlements; for Jewish people we opted for a typical Jewish household with children's games and biblical stories. And for the Ruthenians we opened their world with Milly's painting," said Eva Čárska, the organiser of the project, which runs until March 28.

Vincent
This is an interactive exhibition devoted to the life and work of Vincent van Gogh that initially opened last year at Bratislava's Bibiana on the occasion of the 150th anniversary of the painter's birth. It was recently moved to Piešťany.

Designed in cooperation with The Embassy of the Kingdom of the Netherlands in Slovakia, it runs at the Piešťany City Library, Školská Street, until February 28.

BIBIANA, the international house of art for children, was founded in 1987, as a supportive partner of the traditional world-famous event Biennial of Illustrations Bratislava. The gallery later expanded its original focus on children's illustration work to open its space to different art activities designed for children - ranging from exhibitions and performances to workshops. On particularly demanding projects, the gallery cooperates with professional artists, writers, musicians, and actors. The exhibitions are designed so they can be re-installed in other institutions. Some of them have caught the eyes of foreign experts and have been transported to, for example, Bologna and Rome.