The people from the borderlands

WOODEN churches and Andy Warhol may be what most people associate with the Ruthenians. Still, little is known about this eastern Slavic people who have lived in the borderlands of the Carpathian region - "the land of nowhere" as Warhol famously described it - for hundreds of years.
According to the latest census in Slovakia, in 2001, 24,201 people identified themselves as Ruthenian, which makes them the country's fourth largest minority 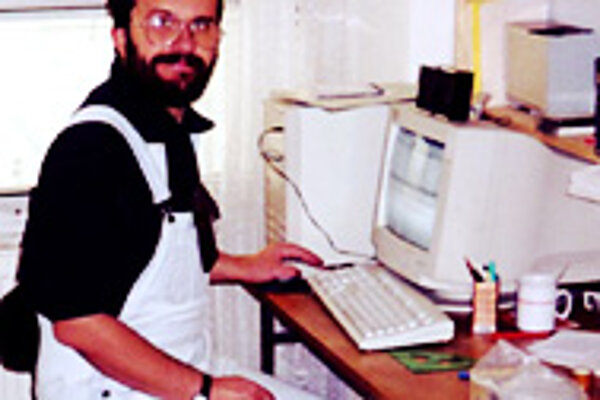 Font size:A-|A+  Comments disabled
WOODEN churches and Andy Warhol may be what most people associate with the Ruthenians. Still, little is known about this eastern Slavic people who have lived in the borderlands of the Carpathian region - "the land of nowhere" as Warhol famously described it - for hundreds of years.

According to the latest census in Slovakia, in 2001, 24,201 people identified themselves as Ruthenian, which makes them the country's fourth largest minority. In order to find out more about them, The Slovak Spectator spoke to Alexander Mušinka, a Ruthenian, who works at the Department of Slovak History and Archives at the Philosophical Faculty in Prešov.

The Slovak Spectator (TSS): Who are the Ruthenians and where do they come from?

It was a mixed group of people that, on one hand was very cosmopolitan, and on the other hand, very conservative. You could say that total conservatism met total cosmopolitanism. For example, Andy Warhol is an innovator who became world famous, yet he comes from a very conservative background, a phenomenon that plays a large role in his art.

TSS: What do you mean by conservatism meeting cosmopolitanism?

AM: This region has always been very poor, very conservative, yet cosmopolitan at the same time. Why? Because the area has always had very little to keep people there. It really was the middle of nowhere and people were forced to emigrate. There are several hundred thousand Ruthenians in the US and in Canada. Some say there are two or three million in the world, depending on how you count.

At the same time, this region has always managed to produce some very new things - to unite or connect the seemingly impossible: eastern and western Christians. The Greek Catholic religion came out of this intersection. To put it very simply, Greek Catholics are orthodox Christians who began to acknowledge the Pope. That happened in this region.

The people didn't have a problem placing a different structure onto something that hadn't changed for a very long time. There are historical documents about the fact that some villages went over to Greek Catholicism and people realised it only several decades later. Because, on the bottom layer, nothing had changed. Slovak was used in the same churches, and they used the same icons. For the regular person, the nuances were not visible. This happened in the 16th century.

TSS: What is the situation of the Ruthenians in Slovakia today?

This argument, which already existed in different forms from the Hapsburg Empire through the first Czechoslovak Republic and up to 1968, started again after the Velvet Revolution in 1989. At this time, a counterpart to the centralised Ukrainian organisation appeared in Slovakia: the Ruthenian national organisation "Rusynska Obroda". So this community is divided into two parts when it comes to representation. Either they are pro-Ruthenian or pro-Ukrainian.

To avoid confusion, it needs to be said that there are also 'real Ukrainians' in Slovakia. There are thousands of people from central and eastern Ukraine who emigrated here, married here, etc.

TSS: How would you characterise Ruthenian identity in Slovakia today?

AM: I would say a normal assimilation process is taking place. Sooner or later, the new generation seems to feel less and less different from the majority population since the difference in culture is not so great. But if we are to talk about what is a characteristic of Ruthenian identity and if we don't use the usual political phrases, it is language, first of all. Secondly, it's the use of the Cyrillic alphabet. Linguistically, the Ruthenian language belongs to the eastern Slavic language group, in contrast to, for example, the Šariš and Zemplín Slovak dialects, which are part of the western Slavic language group.

TSS: What are the main differences between the Ruthenian and the Ukrainian tongue?

AM: It's a very simple question that is very difficult to answer. What is the difference between Czech and Slovak?

TSS: Can a Ruthenian communicate with a Ukrainian without problems?

AM:Yes, they can. But this is a subjective, immeasurable matter. If a Czech person wants to, he can always communicate with a Russian without problems. If he doesn't want to, he won't understand a word.

TSS: In what way can the linguistic relationship between Ruthenian and Ukrainian be compared to the one between Slovak and Czech?

AM: Yes it is. There is not one Ruthenian language. Currently there are six. Each country has codified its own form. In Slovakia it was codified in 1995. The Ukrainians, the Hungarians, the Poles, even the Americans have their own form.

I think the best comparison would be to compare it with the differences of various dialects of the Roma language. Wherever the Roma live, they take over words from the local country of residence. For example, the Hungarian Roma [language] is different from the eastern Slovak Roma, or Vlach Roma.

In Yugoslavia, there is a community of Ruthenians who emigrated there in the 18-19th centuries. They publish many books and periodicals, have their own schools, and are very active. This group of people started to use a peculiar form of Ruthenian that, linguistically, is a western Slovak dialect. To this day they argue about what language it really is. At first glance it's a Slovak dialect, but they consider themselves Ruthenians.

TSS: Is the Cyrillic alphabet in use everywhere?

AM: Yes, although there are certain groups like church institutions that want to use the Latin alphabet because of the younger generations, who use the Cyrillic alphabet less and less. They still speak the language but don't write in Cyrillic.

TSS: Can we speak of a Ruthenian political movement in Slovakia?

AM: There is a political movement, but it is regional. There is no real push to reach a level of state recognition like the Hungarians or the Roma.

The Pro-Ruthenian movement is connected with the Rusynska Obroda organisation, a part of the international Ruthenian Union, which has representatives from all countries. They want the Ruthenians to be acknowledged as an independent nation. There are extremists - mostly from the sub-Carpathian region - who want a Ruthenian state, but I don't think that there is a realistic foundation for that... although, you never know. But in Slovakia, there is no political representation on a parliamentary level. On the other hand, there are politicians with a Ruthenian background, for example the current Finance Minister [Ivan] Mikloš.

TSS: Is there a national Ruthenian education system?

AM: Yes, there is a complete educational structure, from kindergarten up to university, that was purely Ukrainian until 1989. After 1989 the number of schools was reduced from 100 to 17 here in eastern Slovakia. Now there are around 10 schools in which the Ruthenian language is taught.

Humanities subjects were always taught in Ruthenian, whereas subjects like chemistry, for example, were taught in Slovak. So, in reality, the Ruthenian national school system had the Ruthenian language as an additional subject, rather than the language of tuition.

There is also a Ukrainian high school here in Prešov where Ukrainian is the language of tuition. A similar situation also exists in the Ukrainian education system.

TSS: In what way is the Ruthenian culture represented in Slovakia?

TSS: What does the future hold for the Ruthenian minority in light of Slovakia's EU-entry?

AM: Whether or not EU entry will bring about any developments for the Ruthenian issue is a big question mark. I would probably say any drastic change is unlikely. Pragmatically speaking, the Ruthenians really are in between two structures and the main part of the Ruthenian cultural foundation is found in the sub-Carpathian area, in western Ukraine, which will be beyond the Schengen frontier. So, communication will be problematic. I don't think that EU entry will facilitate communication between Slovak Ruthenians and Ukrainian Ruthenians. The question is what the communication will be like between Slovakia and Ukraine.