REACTING to President Rudolf Schuster's decision to merge the April 3 presidential elections with the referendum on early parliamentary elections, PM Mikuláš Dzurinda appealed to the Slovak people to ignore the popular vote.
The opposition, other than the Movement for a Democratic Slovakia (HZDS) party, has welcomed the president's decision. But Dzurinda and many other coalition officials have accused the president of trying to win the votes of members of the electorate unhappy with the right-wing reforms. 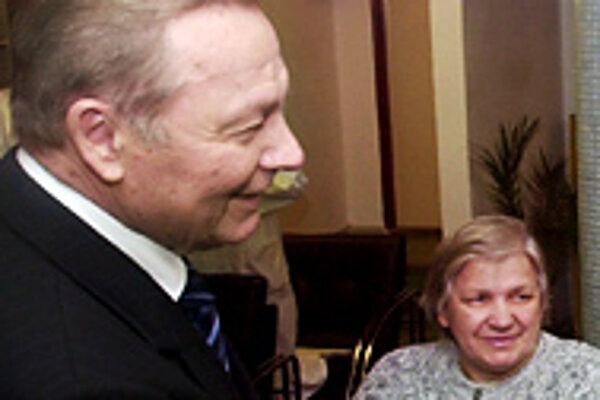 The opposition, other than the Movement for a Democratic Slovakia (HZDS) party, has welcomed the president's decision. But Dzurinda and many other coalition officials have accused the president of trying to win the votes of members of the electorate unhappy with the right-wing reforms.

"In an unprecedented way, Schuster is misusing his post for his own re-election," said Pavol Minárik, deputy chairman of the Christian Democratic Movement.

A similar view was echoed by other ruling MPs. Dzurinda went even further by appealing directly to the electorate not to go to the polls. "From my view it is crucial that people ignore such dishonest activity," the PM told the state-run news agency TASR on February 6.

The referendum on early elections was initiated by the trade unions in a petition that collected more than 600,000 signatures in two months time. The initiative was strongly backed by the opposition parties Smer and the Slovak Communist Party in response to what they argued was an unbearable social situation caused by the cabinet's reforms.

But Dzurinda and other ruling officials have maintained that the reforms need to be carried out as quickly as possible so that their first positive effects can appear by the end of their term in office. They also voiced doubts about whether a referendum on such matter could be called at all, arguing that governments were elected for four-year terms and that the temporary unhappiness of the people could not result in recalling cabinets, as no government would then be able to carry out unpopular reforms.

"A referendum as such needs to be respected but the constitution defines issues that can be decided in the referendum," said Minárik.

Though lawyers and politicians were at odds regarding whether a referendum that would end a cabinet term before its proper four-year period was at all possible, the ruling partners agreed on February 9 that they would not ask the Constitutional Court for an informed legal opinion.

PM Mikluláš Dzurinda told journalists as he was leaving the coalition council meeting that he would "not like to create the impression that someone was trying to put artificial barriers against or to thwart the referendum".

But the coalition partners maintained that the early elections were out of place, although the four ruling parties did not agree on a joint appeal to their voters to ignore the popular vote.

"Early elections could take place if the cabinet became dysfunctional, but the bad mood [of voters] one year after national elections is not a reason for early elections," added László Gyurovszky from the Hungarian Coalition Party.

The president has stood by his decision: "I defend the interest of the majority of the people, not the coalition or opposition parties."

"Who is afraid of the referendum? Rather, they [the coalition] should think about why the referendum is going to take place at all," Schuster said in an interview with the state-run Slovak Radio on January 7.

He also denied that he wanted to gain popular support in the presidential elections by linking the votes.

HZDS MP Miroslav Abelovský said, however, that the remaining 11 presidential candidates, which include the HZDS chairman Vladimír Mečiar, could complain to the Constitutional Court, arguing that they do not have access to an elected post under equal conditions.

Political analysts think, however, that the merging of the two votes will play into the hands of the opposition candidates, including Mečiar, who can use the presidential campaign to criticise the cabinet.

"Merging the votes is a calculation. Yes, the citizens have a hard life [under the current cabinet] and there is a reason to try and find a way to end this. But both the presidential elections and the early elections are separate and very important political issues. It is impossible for us to concentrate on both at one time," Veteška said.

Some political analysts as well as some ruling MPs feared that Dzurinda's direct appeal to voters to ignore the vote would only provoke an opposite reaction and that it would involuntarily increase the turnout. They argued that people do not like to be told by politicians how they are to behave.

For a referendum to be valid, 50 percent of voters must participate. Such a quorum has only been reached once in the history of the country - during the referendum on Slovakia's entry to the EU.

But political analyst Juraj Majchrák from the Institute for Public Affairs think tank in Bratislava said it was natural for the PM to ask voters to ignore the popular vote.

"It is natural from his point of view to ask people not to go. But I wouldn't speculate on whether it will have an opposite effect on voters," Majchrák said.

Public opinion polls, however, have shown that many people planned to go to the ballots. A new survey by Slovak Radio's public opinion section showed that as many as 63 percent of voters would attend the referendum.

But even if the turnout is sufficient, another question remains unanswered. MPs would have to approve a law ending the term of the cabinet with a three-fifths majority of 90 votes. However, Slovak MPs are entitled to vote in line with their own consciences and many say that there is no way anyone can actually force them to vote in line with the result of the referendum.

Even the head of the Constitutional Court, Ján Mazák, said earlier this year that the result of the referendum was not binding for MPs.

"I would like to see those MPs who would publicly disobey the people's decision," said Schuster.

The ruling partners, meanwhile, did not rule out consulting the Constitutional Court on the matter in the event that the referendum is valid.