Bratislava in the golden triangle

THE BRATISLAVA region, which consists of the Slovak capital, Bratislava, and its surroundings, has a special economic and social climate. Its GDP per inhabitant is almost equal to the average in the European Union, it does not suffer from high unemployment, and it has a higher living standard than the rest of the country. Sometimes it seems as if Bratislava is closer to foreign countries than to other Slovak regions. 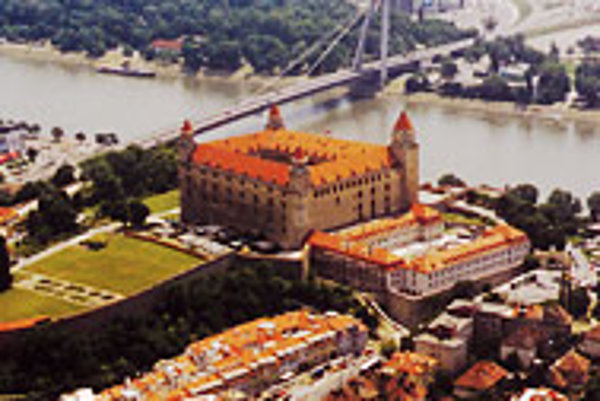 THE BRATISLAVA region, which consists of the Slovak capital, Bratislava, and its surroundings, has a special economic and social climate. Its GDP per inhabitant is almost equal to the average in the European Union, it does not suffer from high unemployment, and it has a higher living standard than the rest of the country. Sometimes it seems as if Bratislava is closer to foreign countries than to other Slovak regions.

Of course, it has had the advantage of housing the capital - first of the Slovak Republic within the former Czechoslovakia and, since 1993, of a young, independent Slovakia.

However, its prosperity also stems from the region's location. The city of Bratislava, placed in the west of Slovakia on the Danube River, has sat on an important merchant crossroads since ancient times.

Today, it practically sits on the border of four countries: Slovakia, the Czech Republic, Austria, and Hungary. The Austrian capital, Vienna, is only 70 kilometres away, Prague about 350 kilometres, and Budapest no further than 250 kilometres.

For much of the time since the beginning of the 1990s, Bratislava was practically the only city where foreign investors put their finances, although this is gradually changing.

General information
The Bratislava region is the smallest in Slovakia. Its area covers about 2,053 square kilometres.

The region is defined by the Danube River and the Záhorie lowlands. The Danube forms the southern state border and the Morava River is the natural western border.

"The Bratislava region has always been the most successful in attracting economic attention," said Rudolf Autner, the director of the Slovak Rating Agency.

"This is due to its geographical location, near traditionally significant business routes (e.g. the possibility of river transportation), as well as its proximity to big cities in the neighbouring countries - Austria and Hungary."

Bratislava has traditionally been an economic, social, and political centre and its important role is felt not only in the western part of Slovakia, but throughout the entire country.

The capital, where about half a million people live, experienced its greatest increase in inhabitants between 1970 and 1980. From 1990, the number of people decreased as part of the population started to move to surrounding districts like Malacky, Pezinok, and Senec.

The unemployment rate of the region stood at 8.6 percent at of the end of 2002, the lowest in the country.

Most people work in the service sector, and the employment structure is comparable to that of developed regions in EU countries.

As Bratislava is a close neighbour to Austria and the Czech Republic, skilled labour tends to migrate to accessible and economically developed regions there.

Each week, about 8,500 people commute from the region to work in Austria and other EU locations.

On the other hand, most of the region's job opportunities are in the capital and about 160,000 to 205,000 people travel to the city to work every day.

Higher income means stronger purchasing power and demand for products and services, which makes the region even more attractive to entrepreneurs considering establishing their businesses there.

As a result of the growth of regional GDP, the difference between an average wage in the region and the rest of the Slovak Republic continues to grow.

But it may be Bratislava's high average salary that is encouraging new industrial investors to establish their factories in different Slovak regions where the labour is less expensive.

The system of secondary grammar schools, as well as technical and vocational schools, is also quite developed.

For many years Bratislava city has had a significantly large population of people with secondary and university education. This is in no small part due to migration: People who go to study at a university in Bratislava often remain there, as they have a better chance of finding a job with higher pay that is closely related to their particular education.

According to analysts, the entire region of Bratislava will have to deal with many problems and new situations in the sphere of social and cultural development.

As Bratislava is a relatively new capital, the city and the whole region will have to get used to the multicultural and multiethnic character that always comes with migration and investors.

For the city, this is not a completely strange experience, as it lies on the traditional crossroads of Hungarian, Austrian, and Slovak cultures, and in the past was a cosmopolitan city for many years. However, almost 60 years of communism did nothing to further develop the character of the town.

This multicultural contact and cooperation will not just be a matter of close and nearly identical cultures, but also of cultures more foreign to the region - from the Balkans, Asia, and former Soviet republics.

The largest share of the region's GDP, 26.8 percent, comes from the area of trade, hotels, transport, and telecommunications. Finance and insurance follow with 22.9 percent. Industry is in third place with a 21.8 percent share.

The next largest contribution to GDP comes in the form of other market services and construction. Agriculture comprises only 1 percent of the whole volume.

The main industrial sectors are the chemical, automotive, machinery, electrotechnical, and food industries.

A skilled workforce with a high level of qualification, a developed transport and technical infrastructure, active foreign trade, and a high demand for goods and services are factors that support industrial development.

Although agriculture has only a minor share in GDP, a suitable climate for the production of various grains and vegetables keeps many agricultural cooperatives in business.

Grape harvesting and wine making are typical in the Malé Karpaty highlands.

Foreign direct investments
Foreign direct investments (FDI) have had a positive restructuring influence on the region's economy, raising the quality of production, the inflow of modern technology, and improving the business climate and its ethics.
FDI in the Bratislava region at the end of 2002 reached Sk299.3 billion (€7.31 billion), 71 percent of all investment in Slovakia.

Investors are particularly attracted to the developed structure of industry and services, the extensive and well-educated labour pool, the scientific research base, the geographical location, and inter-regional transportation networks.

The Bratislava region drew significant attention from foreign investors in 1993 after the creation of an independent Slovakia by splitting the former Czechoslovakia.

In addition to its other advantages, the relatively active trade in the region was a selling point at that time, important mainly for the banking and commercial sectors, the areas in which the first investors established businesses in Slovakia.

The most important investors in the region mainly operate in the automotive (Volkswagen) and chemical (MOL, Henkel, Sasol Italy) industries.

Euro Valley and the golden triangle
The territory created by the city of Bratislava, Vienna, and the Hungarian city Györ is often called "the golden triangle" by economists because of its favourable geographical position and potential for mutual cooperation.

The attractiveness of the region, say investment professionals, stems mainly from the availability of local research facilities and universities, as well as its highly developed telecom and transport infrastructure.

In 1993, the German IT consulting firm Empirica pointed out a location near the western Slovak town of Malacky, within the golden triangle, as a possible place for an IT industrial park.

The cornerstone of the Slovak high-tech industrial park, Euro Valley, was laid on September 2002. Park organisers expect to attract nearly Sk80 billion (€1.95 billion) in investments in 15 years. The park should be under construction in three phases for about 20 years. It will consist of three sectors: research and production, relaxation, and housing.

The site is designed for the production of electronics, computer hardware, software, telecom equipment, and robotic devices. Just after the Euro Valley project broke ground, the German company Siemens announced that it planned to invest there.

Swiss-German company Glas Trösch intends to construct a new molten sand factory in Euro Valley for about Sk7.5 billion (€183,228). The new plant, which will produce construction glass, will be built on an area of 52 hectares and create 900 new jobs.

In addition to Euro Valley, which is planned to be the biggest industrial site in the region, Bratislava also intends to build more smaller and medium-sized parks.

A park near Chorvátsky Grob with a thermal water spa will be for tourism, one in Rohožník for construction, in Vysoká pri Morave for Slovak-Austrian cooperation, in Senec for tourism, and in Štefanová and Viničné for agriculture.

Investments in mid-sized parks in Stupava should be placed in the automotive industry and in Pezinok for waste technologies. Senec is likely to become a logistical centre.

Transport and infrastructure
As the capital city of the Slovak Republic, Bratislava has a significant influence on the area's transportation network. A well-developed transport system was one of the factors that supported the region's development.

The whole region can use a direct highway connection between Hungary, Austria and, of course, the Czech Republic, as it was completed by the former Czechoslovakia.

However, Bratislava still lacks a highway to the eastern Slovak city of Košice. Finishing the highway that would connect Slovakia's west to its east is one of the government's main priorities.

The MR Štefánik airport, near the city of Bratislava, provides local and international flights and serves mainly as a transit airport for Prague, Vienna, and Budapest.

Those airline companies that operate in the airport have opened more and more direct links that connect Bratislava with major European cities, like London and Brussels. The airport's capacity is not being fully used, something that cross-border cooperation could alleviate.

The Danube River, a traditional and natural connection of many European countries, is used for international river transport. Ships and barges sail east to the Black Sea or to the west through the Danube-Mohan-Rhine channel.

The port is built to handle both private watercrafts and commercial ships and barges of grain, coal, and other material.