Not extraordinary but popular 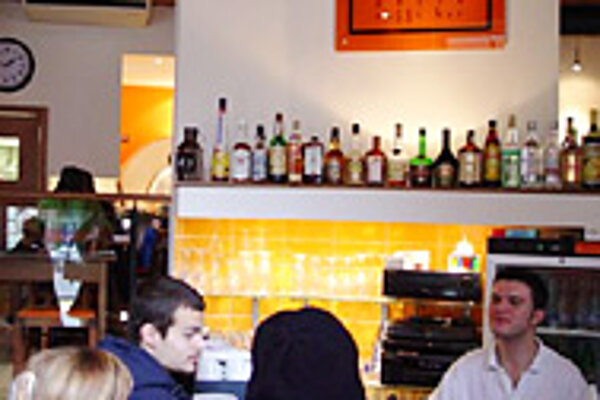 FINDING a pizzeria on almost every corner in Slovakia's capital has become commonplace. As they compete with one another to catch the eyes of passers-by, each tries to win potential diners by advocating that it offers the most Italian pizza in the town, the one made of the freshest ingredients, or simply the one that is the largest.

This last claim applies (or at least the restaurant's sign says as much) to the newly opened Pizza Mizza. Its large Italian-style thin-crust pizzas reach 50 centimetres in diameter and are baked right in front of the customers' eyes - unless you opt to sit in the restaurant's more intimate basement.

The pizzeria can be found at the very tip of the triangular block that, with Trafená Hus Restaurant, points towards Šafárikovo Square. Much like its neighbour on the far side, the shot goose (as Trafená Hus translates), Pizza Mizza also has an entertaining title. It is close in pronunciation to cica Mica, a popular rhyming cat name (cica is a cat in slang). Appropriately, the restaurant's oven is guarded by a large wooden cat statue, which in the past either served as decoration for the flat of the pizzeria's owner or was purchased after the restaurant was named.

After two of my female colleagues and I - also a woman - entered the restaurant's modern interior, a good-looking waiter welcomed us. Our feeling of pleasant surprise intensified when we realised, after looking around, that the two other waiters plus the bartender and the pizza chef were all men and all handsome. However, we were assured that it was just a coincidence: Male customers need not fear - they also have waitresses.

Wooden tables line the orange-white interior on both floors of the restaurant. The bright colours, along with the open kitchen and the generous inflow of natural daylight, seem to enlarge the top floor, while add-ing a bit of radiance to the shaded underground. The somewhat avant-garde paintings, which are also for sale, naturally blend into this restaurant that projects video images onto its walls.

Though the menu has yet to be translated into English, it is easy to understand its list of over 100 meals, which are heavily dominated by pizzas with Italian names and Slovak descriptions, many of which sound so familiar. Problems might arise if you decide to go for something special, like pizza Casanova, with blue cheese, asparagus, and chicken.

The menu's two soups, Minestra di Pomodori and Minestra di Verdure, the former made of fresh tomato and the latter of fresh carrot and celery (both for Sk39), provide a tasty and light start to the main course, which could be pizza, pasta, lasagne, risotto, or a poultry/beef dish. Of the two types of lasagne on the menu, my colleague tried the aubergine (Sk119), which she described as too watery but quite tasty. The samples of pizza and risotto were very satisfying.

The vegetable and ham Toscana, one of five salads on the menu, was not that tasty, possibly due to the seasonal lack of fresh vegetables. Moreover, the waiter did not draw our attention to the selection of dressings to accompany the salads, so we ate half of it dry before realising the mistake.

On the other hand, the waiters were consistently attentive and our food arrived quickly, though at different times, which almost made the haste in delivery unnecessary. The pizza's prices are reasonable, ranging from Sk69 to Sk159 for 33-centimetre pizzas, and Sk108 and Sk288 for 50-centimetre ones.

Seeing the quick and fruitful rise of the thin Italian and the deep American pizza recipes around the country, one can easily predict a constant supply of customers to the freshly opened Pizza Mizza, which wins them over with nothing more extraordinary than pleasant atmosphere and good food.