ROBERT Fico, who has been leading political popularity charts in Slovakia, recently served the media a reason to speculate about a strategic partnership between his party, Smer, and ex-minister of defence Ivan Šimko, the leader of the Free Forum (SF).
After meeting Šimko, a former ally of PM Mikuláš Dzurinda, on February 17, Fico said that he and Šimko held the same opinions on the control of power, fighting corruption, and the need for socially bearable measures. 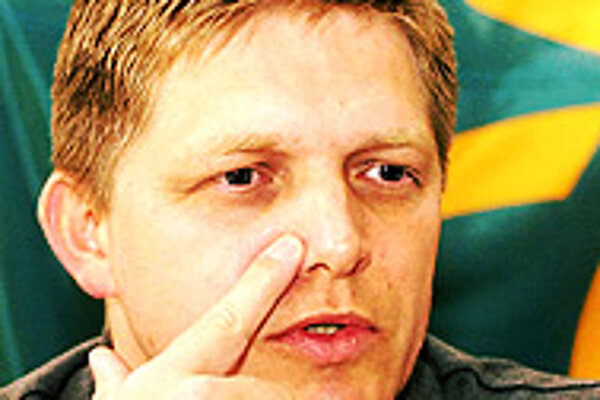 Font size:A-|A+0
ROBERT Fico, who has been leading political popularity charts in Slovakia, recently served the media a reason to speculate about a strategic partnership between his party, Smer, and ex-minister of defence Ivan Šimko, the leader of the Free Forum (SF).

After meeting Šimko, a former ally of PM Mikuláš Dzurinda, on February 17, Fico said that he and Šimko held the same opinions on the control of power, fighting corruption, and the need for socially bearable measures.

"In 2002 we talked about the Slovak Democratic and Christian Union (SDKÚ) without Mikulás Dzurinda. Now it seems that today we have found such an SDKÚ [in the Free Forum]," Fico told media.

Fico, who is known for his habitual opposition to everything related to the ruling coalition, said that, despite the ideological gap between the parties, he would like to see Šimko's party marching into parliament after the next elections.

Smer supports early elections and backed the labour unions' petition calling for a referendum over the issue. President Rudolf Schuster, who also enjoys Fico's espousal, has decided that the referendum on early elections will be held on April 3, the same day as the first round of presidential elections.

On February 14, Prime Minister Mikuláš Dzurinda expressed worries on the private television station Markíza that Šimko would not vote in line with the ruling coalition in parliament. The Free Forum, however, declared that it would continue to support the government's programme while backing those moves by Smer that are in line with the programme's agenda.

Šimko, however, told The Slovak Spectator that he would not call links between the Free Forum and Fico a "strategic partnership".

"The Free Forum will cooperate with each democratic political party with whom it can find a political accord or similarities in programme. With Smer, it is a search for an effective mechanism for the control of power, the fight against corruption, and making social changes bearable for citizens. It [the cooperation] certainly does not include all spheres of politics," said Šimko.

Smer pledged to support the Free Forum's initiative for the establishment of a parliamentary committee for the coordination and supervision of reforms. Meanwhile, Smer is also willing to back a Free Forum nominee for chairman of the committee, the news wire TASR reported.

In a search for partners to escape his minority position in parliament, Dzurinda held talks with independent MPs including former Movement for a Democratic Slovakia members Ladislav Polka, Ivan Kiňo, and Miroslav Abelovský; the Communist Party's Herman Arvay; and Robert Nemcsics of the New Citizens' Alliance.

For the first time, Dzurinda admitted that the SDKÚ was considering the possibility of signing an agreement with these MPs.

The rest of the ruling coalition want to avoid written agreements with the independent MPs and will not hold joint talks with the Movement for a Democratic Slovakia renegades or the Communists.

However, they will not oppose verbal agreements between individual coalition parties and the MPs if these are to push the cabinet's agenda forward.

The Hungarian Coalition Party and the Christian Democrats would prefer an agreement with the Free Forum.

To the question of whether he would be happy with a Communist Party member supporting the cabinet's agenda, Rusko told the daily SME "the Communist Party had 1.3 million members, maybe even including your parents."

The Hungarian Coalition and the Christian Democrats were not happy that Dzurinda was negotiating behind their backs.

Pavol Hrušovský, chairman of the Christian Democrats, said that no support could really be rejected.

Hungarian Coalition Party boss Béla Bugár said that cooperation with Ivan Šimko would be the best solution but he had not seen any sincere effort on the side of the Free Forum as of yet.

However, Šimko said that Dzurinda's talks with the independent MPs have not surprised him.

"Dzurinda is trying to defend his position and thus any vote is good for him. This does not change anything for our position towards his party. We are certain that the policies of this party have parted from the values on which its original program was built," Šimko told The Slovak Spectator.

At his last meeting with Šimko on February 3, Dzurinda failed to secure the ruling parties a majority in parliament after the Free Forum head rejected the PM's attempt to iron out the wrinkles between him and his former ally.

Dzurinda offered Šimko the seat of deputy speaker of parliament, which is vacant.

The cabinet parties currently have control of 68 of the total 150 MPs and the support of the Free Forum's eight MPs would re-establish a slight majority for them.

The Free Forum consists of seven former members of the PM's Slovak Democratic and Christian Union who left the party at the end of 2003 in protest of Dzurinda's policies.

Šimko turned against Dzurinda after he was ousted from the seat of defence minister for his refusal to vote for the recall of the former head of the National Security Office, Ján Mojžiš, as their party's leadership had recommended.