THE SLOVAK police are making impressive leaps in the fight against bribery, one of the greatest nuisances troubling society today, according to official statistics. The Slovak Spectator met with Vladimír Palko, interior minister and vice-chairman of the Christian Democratic Movement, to discuss not only corruption, but also the power of the mafia, the rights of homosexuals, and the war in Iraq.
The Slovak Spectator (TSS): What would make Slovaks stop giving bribes? 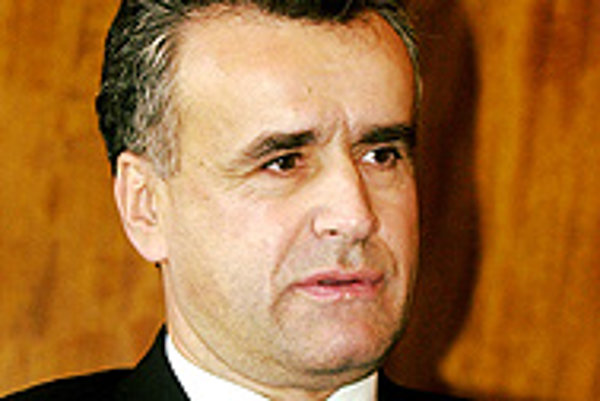 THE SLOVAK police are making impressive leaps in the fight against bribery, one of the greatest nuisances troubling society today, according to official statistics. The Slovak Spectator met with Vladimír Palko, interior minister and vice-chairman of the Christian Democratic Movement, to discuss not only corruption, but also the power of the mafia, the rights of homosexuals, and the war in Iraq.

Vladimír Palko (VP): They have to change for the better.

TSS: How can that happen?

VP: Admittedly, if we succeeded in bringing more corruption cases to light, it could help. And in this case the trend has really been improving. The number of cases successfully closed in January of this year alone is higher than the figure for the entire previous year. We are already counting the number of cases solved per year in the hundreds.

It is good that we are now also able to close cases in such a manner that the evidence is absolutely clear - when the perpetrator is caught immediately after receiving the bribe.

But whether that can lead to an overall decrease in corruption in Slovakia, that's hard to say. Corruption is a part of the Slovak lifestyle, and concerns thousands, tens of thousands of people.

TSS: Can that lifestyle change?

VP: There are clear improvements. One other thing I would like to say is that corruption has various forms. When it comes to the largest amounts, it doesn't take a form that makes it possible to sue the perpetrators directly for corruption, for accepting money or some other undue advantage. Top corruption is done through fake deals, fake agreements on the supply of fake services. Many times, there are a number of persons involved - many links in the chain.

Here I would expect the prosecution to be harsher. It is not good when we are confronted with fake deals for valueless services between two firms where millions flow from one to the other and they pretend that it's not money laundering.

Unfortunately, under the previous Attorney General [Milan Hanzel, whose term in office ended in January and who still works at the Attorney General's Office], I had several negative experiences where he turned a blind eye to such cases.

TSS: That is a serious claim. Can you be more specific?

VP: (long silence) I said what I wanted to say.

TSS: Former military prosecutor Dobroslav Trnka, who was elected by the votes of both coalition and opposition MPs, was appointed as the new attorney general on January 26. Do you think this situation will now improve?

VP: I don't know. I don't want to make predictions. I always talk about what the past was like and what needs to be changed for the future. I hope our cooperation will be good.

TSS: Slovakia has a bad image abroad as regards corruption. Do you think it is really worse here than in other countries of the region?

VP: Oh please, of course not. I think Slovakia has fairly good results in the fight with corruption.

TSS: How has public perception of the police changed since you took office?

VP: I think the public has noticed my sincere efforts to improve the work of the police and their credibility. I try to get rid of those who should not be in the force and I certainly don't cover their backs. I also introduced the "police Wednesdays" - all citizens can visit their local police chiefs on the first Wednesday in any month. Since I became minister, the credibility of the police has gone up 10 to 15 percent, which pleases me a lot. On the other hand, I don't think it can ever go over 50 percent because the police have so many tasks and the work is so demanding that it will always be possible to make mistakes. Besides, the media are fascinated by police work and they greatly enjoy bringing very detailed news about the mishaps of any police officers, which I sometimes find almost ridiculous.

TSS: Do you think last year's suspicions that the police were involved in illegal phone-tapping and the later disputes between various intelligence agencies influenced people's perception of the police and other security forces in any way?

VP: Not at all. Let me stress again that the credibility of the police started rising in opinion polls in the second half of 2003, so the trend is good. The growth is evident. We will see where the limits of what we can achieve are.

TSS: In a recent interview you indicated that the position of the mafia in Slovak society is strong. How strong is it?

VP: The word mafia is vague. I talked about an association of people characterised by two things - the first is that they strive for illegal profits and illegal positions and want to be above the law, and the other is that, in order to achieve those things, they want the police, prosecution, and courts to be weak. I did not say they were intertwined or organised in any way. That's why I consider this statement to be rather banal. I said these people were in politics, business, media, in courts, at the prosecution, in the secret service. There is nothing surprising about that. After looking at the events of past years, one can see that it is a fact.

TSS: How much power do they hold?

VP: People like that will always exist and crime fighters have to combat them. But I don't see it as something we cannot deal with. The biggest problem is corruption. When we talk about criminality among people in high places, then the main problem is corruption and corruption-related crimes.

TSS: You were the only cabinet member to vote against the proposed anti-discrimination law. Why?

VP: I didn't like the provisions about sexual orientation. [The Christian Democratic Movement] suggested that it be said explicitly in the law that sexual orientation is not examined when people are being admitted for a job. However, the final draft said that what is unacceptable is discrimination based on different grounds, among them sexual orientation.

I didn't vote for that because our proposal had no ambiguities. It is clear what is and what is not allowed. The wording that has been approved is not clear. It's difficult to tell the difference between real employment discrimination against a homosexual, which is something we all oppose, and a situation where we are confronted with the indecent behaviour of a homosexual who publicly declares his different orientation, whereby offending those around him.

TSS: Do you think such cases are common?

VP: Well, haven't you ever seen a demonstration by these homosexuals on television?

TSS: Do you think homosexuals are more likely to behave indecently than heterosexuals?

VP: I have no reason to be preoccupied by that question. This entire anti-discrimination agenda, the fight against the discrimination of homosexuals, reminds me of a huge production of Hans Christian Andersen's fairy tale The Emperor's New Clothes. There, the entire emperor's court admired non-existent clothes. In this case, a Europe of half a billion and 300 million people in the US are fighting discrimination against homosexuals when no one has shown any specific cases where discrimination has taken place. I don't support discrimination against anyone and I will stand up against any such discrimination. But if I see that we are solving a problem that doesn't exist, I'm very careful. It reminds me of communist demonstrations for peace in the 1980s. Those were also something I did not participate in and it was not because I was a warmonger; it was all fake.

TSS: The war in Iraq is still much debated abroad, but no one seems to remember it here. You were against Slovakia's participation in the conflict from the start. In retrospect, what do you think about Slovakia's decision to get involved?

VP: It was wrong. In the US and in Britain they at least have enough honesty to keep questioning where the weapons of mass destruction are. Absolutely no one cares about that here.

VP: Those are the types of politicians we have here.

TSS: What do you think the Slovak government should do now?

VP: Admit the mistake and pull back troops. But it's not a question for me. You should ask those who voted in favour of the deployment of our soldiers. My opinion turned out to be correct.

TSS: What are your thoughts on the coming presidential elections?

VP: Currently we are witnessing efforts by [former authoritarian Prime Minister Vladimír] Mečiar to appear acceptable not only in the eyes of his traditional voters, but also of others. He is playing good guy. And that is now helping the government.

TSS: Former Christian Democratic Movement chairman Ján Čarnogurský, one of Mečiar's most vocal critics, recently said that he could imagine a coalition including his party and Mečiar's Movement for a Democratic Slovakia (HZDS). Does that also help Mečiar appear more acceptable?

VP: How? Ján Čarnogurský has said so many times who Mečiar is that he is not helping him in any way. Čarnogurský is only discussing certain political possibilities of the future.

TSS: You personally would not have a problem with entering a ruling coalition with the HZDS?

VP: I would have a problem. The HZDS is not a party that is ready to enter the government. It has to free itself of its past. And a part of that process is freeing itself of its chairman.