Age of darkness over

IT WILL soon be six years since Michal Kováč, the first president of the independent Slovakia, left his office. Kováč, who had been the protégé of Prime Minister Vladimír Mečiar, had a turbulent five-year election term marked by conflicts with his former partner.
Kováč's son, allegedly involved in shady business deals, was abducted to Austria, where he faced the threat of criminal prosecution, in the summer of 1995. 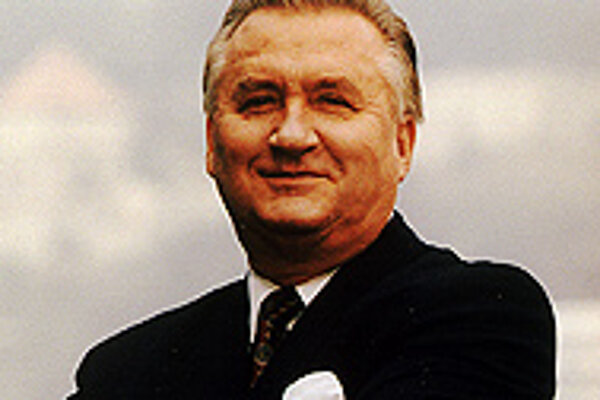 IT WILL soon be six years since Michal Kováč, the first president of the independent Slovakia, left his office. Kováč, who had been the protégé of Prime Minister Vladimír Mečiar, had a turbulent five-year election term marked by conflicts with his former partner.

Kováč's son, allegedly involved in shady business deals, was abducted to Austria, where he faced the threat of criminal prosecution, in the summer of 1995. The stunt has been described as orchestrated by the intelligence service in an attempt to intimidate the head of state, by then a major opponent of the authoritarian Mečiar and his Movement for a Democratic Slovakia (HZDS).

After Kováč left the presidential palace in March 1998, the office remained empty for over a year until Rudolf Schuster became the country's first directly elected president in June 1999.

Kováč was among the contenders in the first round of presidential elections, but withdrew his candidacy days before the vote, telling his supporters to support Schuster.

The Slovak Spectator met with the former president to discuss his political past and Slovakia's political future.

The Slovak Spectator (TSS): Looking back at the presidential elections in 1999, how do you feel about giving up your candidacy and asking your supporters to vote for President Rudolf Schuster?

Michal Kováč (MK): Even after some time has passed I think it was the right move. You have to look at the situation we were in at that point. There was a real threat that [former PM Vladimír] Mečiar would become president.

Only two candidates could make it into the second round. I considered my chances and found that I wouldn't make it. I therefore asked myself what I could do to prevent Mečiar from being elected. I figured that I should ask my supporters to give their votes to Schuster, who was the coalition's candidate.

TSS: Do you think it is still important that Mečiar, who is again running for president, be defeated?

MK: I'm still convinced that it would be a misfortune for Slovakia if Mečiar were elected. However, it would not be as tragic as it would have been in 1999. I can imagine that many representatives of the EU and the US would even now try to avoid Mečiar's invitations and, in turn, he could not expect invitations from them.

Candidates of the right, such as [veteran MP for the Christian Democratic Movement František] Mikloško, [former ambassador to the US Martin] Bútora or [the liberal New Citizen's Alliance's Ľubomír] Roman, should take a realistic look at their chances.

I would certainly call on them to give up their candidacies and endorse just one from their ranks who would have a real chance of being elected, because they are all competing for the same voters.

TSS: What will decide the elections?

MK: It will certainly not be the criterion of who is the best candidate. Unfortunately, the people don't know enough about the qualities of the individual candidates and they are unable to properly determine who is telling the truth and who is lying, who stands on the side of good and who less so.

If I knew that 90 percent of our citizens had this skill, I would be confident that they would pick the best one. But what plays a role here is whom people know. Many know Mečiar and for them, he will always be the champion.

Similarly, Schuster's chances are rather high just because he is the incumbent and some people like his criticism of the government.

[Foreign Affairs Minister Eduard] Kukan has the advantage of being the candidate of the Slovak Democratic and Christian Union, which has played a very important role in re-establishing the trust of the international community in Slovakia.

TSS: Do you think the opposition party Smer's decision to support one of the candidates could play a role?

MK: I don't think it can have a decisive impact. Less and less people listen to what they are told by political parties when it comes to presidential elections. It played a role in the 1999 elections, when there was a common coalition candidate. Now they will decide based more on personal sympathies.

TSS: Do you think there is a difference between Mečiar and former HZDS vice-chairman Ivan Gašparovič, who is also running?

MK: There is some difference, but it's not significant. As the former speaker of parliament, Gašparovič, too, is responsible for actions that led Slovakia into international isolation. He supported an agenda that he knew contradicted democratic principles and the positions of the EU.

TSS: Are you disappointed with the way the governments that came to power after Mečiar was ousted from office in 1998 dealt with the things that went on under him, whether it was the abuse of the intelligence service or shady privatisation?

Not everyone was convinced under Dzurinda's first government that the [democratic] developments could not be overturned. Many were afraid that the cabinet would fall and they would pay the price for getting too engaged in cases involving people from the HZDS [if the party returned to power].

Now there is more experience, more willingness, more courage to deal with issues. With regard to what we went through, it was hardly possible to achieve more. Lately, we have seen a positive trend and people are starting to understand that their position is not dependant on who is prime minister, but on their skills.

TSS: Do you think Mečiar could ever be held responsible for his actions?

TSS: Looking back to the years 1993 through 1998 when you were president, what were the most important events in Slovakia?

MK: Unfortunately, the most significant events were all negative. The first such event was that after early elections in 1994 Mečiar formed the government. He was forced to form a coalition with those partners that were willing to cooperate with him at the time [the nationalist Slovak National Party and the extreme leftist Association of Slovak Workers]. That didn't give Slovakia or him a good name. The fact that he was then forced to rule with inadequate partners made it impossible for him to return to high office again.

The second negative event was that we were not invited to start EU accession talks along with other countries of the region. Moreover, it was a time of very wild privatisation. It was privatisation into previously selected hands. This was not a period we can be proud of.

One positive thing was that, despite all of these events, the foundations of democracy were left intact and enabled free democratic elections in 1998. Democracy wasn't as weak as we had believed at times.

TSS: Do you think a similar age of darkness could ever return?

MK: I'm convinced it cannot. Even if there are early elections and even if Mečiar becomes president, it will not halt our integration process. Even a different government, if it wants to rule responsibly, has to see the reforms that have been launched through. Developments can be slowed down, but we will not return. But I hope we can also avoid slowing them down.

TSS: Could early elections slow it down?

MK: Yes, because many investors will certainly wait to see how things turn out. Only the present coalition can guarantee that the reforms continue.

TSS: Which party currently has your support?

MK: The current coalition has the most complex agenda. The opposition is critical, but its criticism is often populist and unnecessary. People can have different opinions about things, but it's necessary to differentiate between populism and arguments. The opposition has not yet introduced its programme; so many people don't really know what sort of an alternative it offers.

TSS: Do you think early elections can be avoided?

MK: If the coalition starts presenting the positive results that are being achieved in our society, in the economic and political realm, if every minister starts coming forward with objective information, I think the people will see that the opposition's criticism is unfounded. They will ask themselves whether the government isn't right. If the public gets enough information about how things really are, it will find that it would be a mistake to change the cabinet.

TSS: Even if the referendum fails, will the coalition manage to reach an agreement with former Defence Minister Ivan Šimko, who has recently joined the ranks of the opposition and has so far refused to strike a deal with the ruling parties?

MK: I have no doubts about that.