Trade gets over the past

MUTUAL feelings of national friendship, celebrating victory in the second world war, and two-way business cooperation - Russian ambassador to Slovakia Alexey Borodavkin is enthusiastic about relations between the two countries now and after EU entry. He shared a few of his reasons in an interview with The Slovak Spectator. 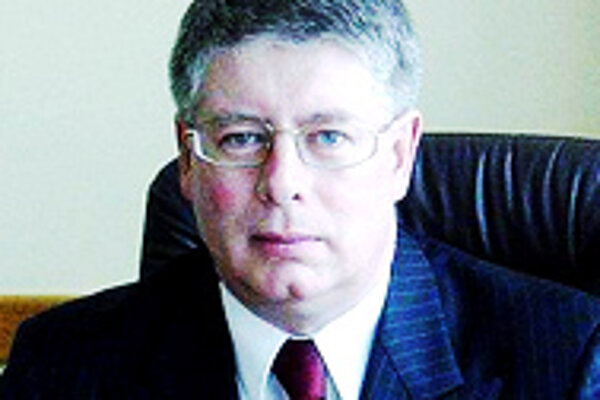 Font size:A-|A+  Comments disabled
MUTUAL feelings of national friendship, celebrating victory in the second world war, and two-way business cooperation - Russian ambassador to Slovakia Alexey Borodavkin is enthusiastic about relations between the two countries now and after EU entry. He shared a few of his reasons in an interview with The Slovak Spectator.

The Slovak Spectator (TSS): Apart from shared Slavic language roots, Slovakia and Russia maintain strong contacts. Could you characterise these contacts and list some of the most important projects that Russia and Slovakia share?

Investment activities between our countries have also grown more intense. Slovaks know well that two big Russian companies, Gazprom and Yukos, invested into gas utility Slovenský Plynárenský Priemysel and Transpetrol. Russia is interested in taking part in the privatisation of electricity producer Slovenské Elektrárne. I also hope that the contract on the participation of the Russian corporation United Heavy Machinery in the Komárno shipyard will be signed soon.

There are interesting high-tech projects as well. Construction of the Bratislava Cyclotron and Laser centres with Russian participation is close to completion. I hope that all this will serve as a good basis for the further bilateral cooperation of scientists.

We are approaching the fifth anniversary of the first space flight of a Slovak astronaut, which was on the Russian space-station MIR. I hope that this flight was not the end of Slovak-Russian cooperation in space research.

TSS: Are Russian contacts more intense with Slovakia than with the other Visegrad Four countries (the Czech Republic, Hungary, and Poland)?

AB: It is difficult to compare. However, I know that Russian capital is active in other countries of central and eastern Europe. Slovak-Russian business links have been shaped for decades and there is practically no language barrier. That makes these contacts easier. Moreover, Slovakia has substantial interest in Russia, as well. For example, the Slovak tyre maker Matador is very successful on the Russian market. There is a Russian-Slovak joint venture for TV manufacturing. There are also plans to produce Slovak glass in Russia.

TSS: Talks with Russia about the upgrade of Slovakia's air force technology, the Russian MiG-29 fighter jets, could start within weeks, Defence Minister Juraj Liska said. Do you have any information on the Russian stance on this issue or on the state of the talks?

AB: The talks are under way and there are good conditions for the completion of agreements on the modernisation of Slovakia's air force, especially the Soviet-era MiG-29 jets. Russia has the technical capabilities necessary to modernise these jets. I want to stress that MiG is a well-established company that supplies several countries with its products. I think that a deal between MiG and Slovakia would be mutually advantageous.

TSS: Do you share the optimism of the international community, which looks favourably on the Slovak investment environment?

AB: As I have said, Russian investors are interested in Slovakia and this says volumes about the quality of the Slovak business environment. Slovakia has simplified its tax legislation, introduced a flat tax, and is trying to further improve its business climate. A highly qualified work force is also an attractive feature of the Slovak economy. The strengthening of the Slovak crown has helped the local investment market gain more muscle.

TSS: What are the barriers that Russians still face in Slovakia?

AB: I would list one, but probably the most important. It is the visa regime, which was introduced between our countries in 2001. We understand that Slovakia cannot lift that regime, as it is linked to the country's entry into the EU. However, we think that it is possible to liberalise it. Germany, France, Italy, and Poland have taken this path, which is followed by the EU as a whole. For example, providing businessmen with multiple one-year visas would be beneficial for the economic cooperation between Slovakia and Russia.

TSS: The clearing of the communist-era Russian debt to Slovakia has been one of the issues troubling Slovak-Russian relations. The Slovak cabinet proposed to settle around two-thirds of the debt owed Slovakia by the Russian Federation. Do you see any progress on this point?

AB: The Soviet Union's obligations toward Slovakia that Russia took over totalled $1.7 billion (?1.33 billion). By now, Russia has settled more than $1.6 billion (?1.26 billion). The amount left was allocated to different joint projects. I have already mentioned the Cyclotron and Laser centres and the MiG upgrades. I am aware of no obstacles preventing the final settlement of the debt soon.

TSS: The fall of the communist regime modified contacts between Slovakia and Russia. Have you observed any negative sentiments towards Russia within Slovak society?

AB: I have lived in Slovakia for a year and three months and encountered no negative Slovak reactions towards Russia. On the contrary, I have felt that there are mutual feelings of friendship between the two nations.

TSS: Do you feel that Slovaks and Russians know enough about each other? Has the potential for contact been fully explored?

AB: Many Russians have not simply heard of Slovakia; they have substantial knowledge of the country, its history, and its traditions. Moscow has a district that is connected with Slovakia, a street and a metro station named after Bratislava, and there is also a school with Slovak language training. A simpler visa regime would have made Slovakia an even more attractive tourist destination for Russians. I hope that friendly ties between Russians and Slovaks will deepen.

TSS: How will the country's entry to the European Union modify Slovak-Russian relations?

AB: The European Union is one of the most significant strategic partners of Russia. After May 1, when an additional 10 countries become full-fledged members of the EU, 54 percent of Russia's trade turnover will be directed at the EU. Russia has plans to further develop cooperation with the EU in economy, security, culture, and legislation. This all means that after Slovakia enters the EU, it will become part of an integrated international structure with whom Russia has already been closely cooperating.

However, there are some issues that must be solved before Slovakia's entry to the EU. Several existing bilateral agreements must be adapted to the new conditions. It is important that Slovakia and Russia revise these documents in time so Slovakia can join the Protocol on Cooperation and Partnership between Russia and the EU.

TSS: What are the most important cultural projects that Slovakia and Russia share?

AB: Russian artists, musicians, and writers regularly visit Slovakia. Recently, the famous Russian composer Sofija Gubajdulina was in Slovakia. There was an exhibition of artwork by the well-known Russian artist Tatjana Vavrzhina at the Russian Cultural Centre in Bratislava. I am happy that Russian literature, contemporary and classical, is being translated into Slovak. I would like to invite the readers of The Slovak Spectator to visit the Russian Cultural Centre in Bratislava.

This year will be marked by several important Slovak cultural activities in Russia under the umbrella of the Days of Slovak Culture in Russia. In 2005, Russian artists, musicians, performers, and actors will be participating in the "Days of Russian Culture in Slovakia", which will be devoted to the celebration of the 60th anniversary of victory in the Second World War.

The last couple of years have brought a renewed interest in learning the Russian language, as more Slovak youth are tending to sign up for Russian language courses. Hopefully this trend will continue.

TSS: What are the spheres in which you would like to see more cooperation between Slovakia and Russia?

AB: I would like to see more intense links between the young people of the two countries. Increased contacts between the Russian and Slovak regions would also be welcome. Slovak small and medium-sized businesses could benefit from more intensive business contacts with Russian partners.